Micro 9mm handguns are popping up all over, and Kimber’s Micro 9 is no slouch.

In one of the old books that I like to read, the author mentions that there are times when one cannot be burdened with a rifle, but the situation may be such that one does not want to be unarmed. Therein lies the virtue of the handgun. Most handguns are portable and provide a measure of protection. With the increase in concealed carry across the country, compact handguns are enormously popular — and the selection is truly bewildering. 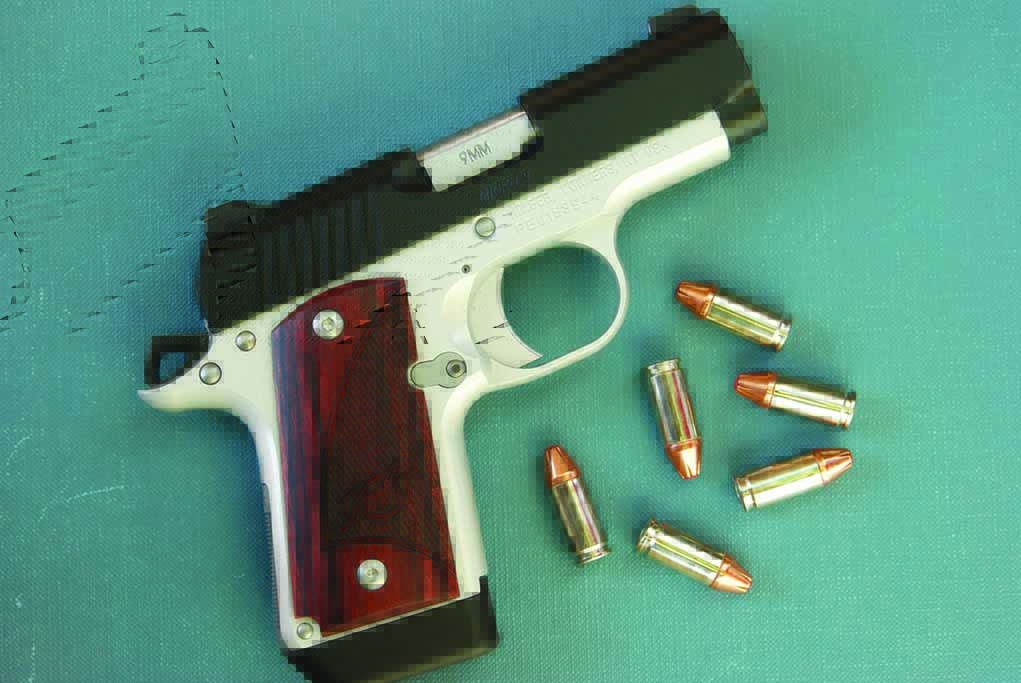 The Kimber Micro 9 is a capable and attractive little pistol.

Small pocketable revolvers have been on the market since the late 1800s, and for well more than a century, the 1911-style has dominated the marketplace. Designed by John M. Browning, the Colt 1911 was the primary handgun of the U.S. military for 85 years. Chambered for the .45 Auto cartridge, the pistol utilizes a single-stack magazine and is fired in the single-action mode. The 1911 pistols incorporate both thumb and grip safeties, and many shooters take solace in the use of two very intuitive safeties.

Kimber offers a vast array of pistols of the 1911 pattern. These include full-size models in .45 Auto, 9mm Luger and 10mm Auto calibers. However, smaller models having 4-inch barrels (the so-called “Commander” size) are also produced in .45 and 9mm calibers, but for discrete carry, models having 3-inch barrels and shorter grips are available.

Newer in the Kimber line are the Micro versions, with the original model being chambered in .380 Auto. These pistols function as a 1911 except for the absence of a grip safety. With magazines that can hold either six or seven rounds, and with a 2.75-inch barrel, the Kimber Micro .380 pistols are easily concealable. However, even though many people want a compact pistol, they desire one with more power than that of the .380 Auto.

Kimber has already taken the next step to produce a more powerful — but yet very compact— pistol. Known as the Micro 9, it’s chambered for the 9mm Luger cartridge and features a 3.15-inch barrel yet, unloaded, it weighs only 15.6 ounces. And because shooters like options, the Micro 9 is available in more than a dozen versions that differ in metal finishes, grip styles, sights and other details.

My choice was obvious as soon as I saw it: The version known as the “Two Tone” has a blued-steel slide and an aluminum alloy frame that resembles brushed stainless steel. This model may be considered as the “basic” version, but it comes with beautiful checkered rosewood grips and white-dot sights.

Overall dimensions for the Two-Tone are 6.1 inches long, 1.06 inches wide and 4.07 inches high. The sight radius is 4.3 inches, and the trigger pull is approximately 7 pounds — which is not what’s expected for a target pistol, but it’s not bad for the intended uses of a Micro 9. The Two Tone version of the Micro 9 has an MSRP of $654, so it’s not exactly inexpensive, but it certainly is reasonable.

Pistols chambered for the .380 Auto are generally based on a simple blow back action, but this Micro Kimber is no .380 Auto. For a pistol chambered for the more powerful 9mm Luger cartridge, a locked barrel-slide design is necessary. The Kimber Micro 9 features a locking mechanism that involves a large step on the rear of the barrel that mates with the cutout in the slide. Upon firing, the barrel and slide travel rearward for a short distance after which the toggle link pulls the barrel downward. That action moves the locking ridges on the barrel from the recesses in the slide after which the slide continues to the rear to complete the ejection and loading cycle. Unlike most other pistols of the 1911 pattern, there is no grip safety and the safety does not lock the slide.

The seven-round magazine furnished with the Micro 9 has a black extension that allows me to keep three fingers around the grip rather than two on the grip and the little finger below the butt. A good purchase is provided by the checkered rosewood grips, and the trigger is grooved and the backstrap sharply checkered. Altogether, the Micro 9 is comfortable in the hand, and the controls work properly. 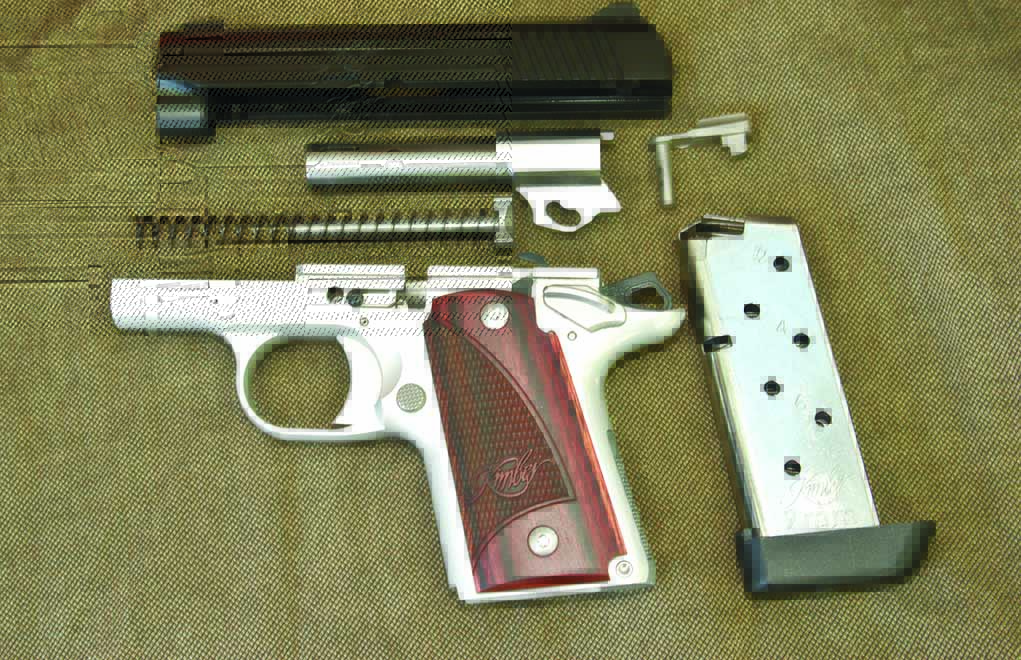 Disassembly and reassembly of the Micro 9 is simple — but it is different from that of full-sized 1911 pistols.

Can This Micro Shoot?

With a barrel that measures only 3.15 inches in length, the Kimber is compact for easy carry — but one may ask how much of the performance of the 9mm Luger cartridge is lost with such a short barrel.

Even using the velocity measured at 10 feet from the muzzle, the little Micro 9 generates 290 fpe with a 115-grain bullet. When used with some of the defensive loads, muzzle energy would be around 300 fpe and that with bullets that give excellent performance. The Kimber Micro 9 may be small, but it’s potent.

As the data shown in the table reveal, the little Kimber Micro 9 will give velocities that are within 100-125 fps of those produced by full-size 9mm pistols. Velocity loss is expected because of the short barrel, but it’s not substantial. It’s a powerful little beast.

I’ve had a Kimber Micro in .380 Auto for some time and, even though it’s slightly smaller and lighter than the Micro 9, it’s not unpleasant to shoot. However, I had some concern that being chambered for the more powerful 9mm Luger cartridge, the Micro 9 might be a little unpleasant to shoot — that did not turn out to be the case at all. Although recoil is noticeable, firing the Micro 9 is not painful. The bark and jump are there, but not to an excessive degree.

Sights on the Micro 9 are excellent for the intended use of the pistol. The square-topped front mates very well with the square notch in the blade of the rear sight. In order to make the sights stand out in dim light, the three-dot system is used (white dots on either side of the rear notch and on the rear face of the front blade). This combination is both popular and effective. In fact, I find the dovetailed sights on the Micro 9 to be about as good as those on any of my other centerfire pistols that have fixed sights.

Trigger pull on the Kimber Micro 9 is advertised to be approximately 7 pounds. On my pistol, there’s a short take-up movement followed by a crisp let-off, but the trigger pull is indeed heavy. Over many years of shooting many types of firearms, I’ve found that it’s possible to get used to a trigger that has less than ideal characteristics. It took a while to get used to the trigger on the Micro 9, but with familiarity came acceptance — and with acceptance came improved skill.

A shooter who has a Kimber Micro 9 and practices on a regular basis will become accustomed to the trigger action. It will probably be most disconcerting to a relatively new shooter whose experience has been with handguns that are intended for different uses. As a safety issue, one would not want a hair trigger on such a small defensive pistol, but I would prefer let-off to occur with a pull that’s a couple of pounds lighter.

Although the Kimber Micro 9 is not a target pistol, it was easy to get nice clusters of holes in a target placed at 7 yards. In testing several types of ammunition, the pistol fed, fired and ejected reliably with bullets of all types. In addition to several types of factory loads tested, I fired several different handloads and the Micro 9 functioned flawlessly with all loads tested. I have complete faith in the little pistol as long as my target is at short range.

The Kimber Micro 9 is available in a plethora of models that range in outward appearance from all stainless to vibrant colors, so there’s a version to satisfy the artistic taste of anyone who wants a compact 9mm that’s similar to the 1911 in operation. The pistols are attractive and fit most hands admirably. The Micro 9 is a surprisingly accurate and adequately powerful little pistol that makes a good piece of defensive ordnance.

Check this out: Gun Digest offers a ton free downloads from AR-15’s and Concealed Carry to Reloading and Gun Values. Click here to see what they offer.