House Speaker Nancy Pelosi deleted her original tweet sympathetic for “Empire” actor and singer Jussie Smollett amid reports that Smollett may have staged the alleged January 29 attack against himself.

Smollett claimed to law enforcement he went to a local Chicago Subway eatery at 2 a.m., and he was physically assaulted by two men in ski masks who poured a bleach-like substance on him and tied a rope around his neck like a noose. (RELATED: Here Are All The Politicians Who Rushed To Judgement On The Smollett ‘Hate Crime’)

Smollett, who is gay and black, also told police his attackers yelled racial and homophobic slurs at him as well as told him, “This is MAGA country.”

Politicians and celebrities alike rallied around Smollett, including Pelosi, who tweeted on January 29, “The racist, homophobic attack on [Smollett] is an affront to our humanity. No one should be attacked for who they are or whom they love.”

However, as the case unfolded over the past two weeks more questions arose as to whether Smollett was telling the complete truth about the January 29 incident. 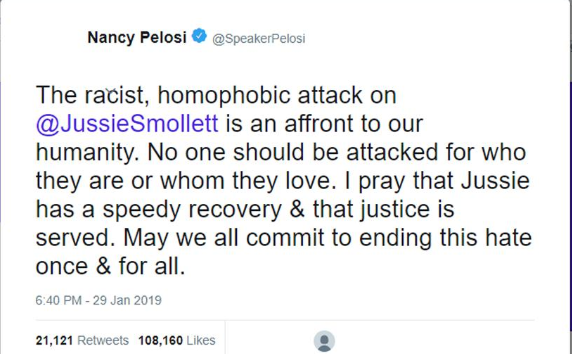 Booker was asked about the recent developments in the case and would only say he is waiting for more information before he makes any further statements about the matter. (RELATED: Cory Booker Called Smollett ‘Attack’ A ‘Lynching,’ Now He’s Refusing Comment Amid New Evidence In The Case)

According to ABC News, two Nigerian brothers, initially arrested by Chicago Police in connection to the assault against Smollett were later released after telling law enforcement that Smollett paid them to stage the attack.

One of the brothers is Smollett’s personal trainer, according to a statement to ABC News from Smollett’s attorneys. They had decided to cooperate after investigators revealed that they had evidence the brothers had bought the rope that was put around Smollet’s neck at a local hardware store.

Smollett’s attorneys released a statement denying he staged his own attack, saying in part, “As a victim of a hate crime who has cooperated with the police investigation, Jussie Smollett is angered and devastated by recent reports that the perpetrators are individuals he is familiar with. He has now been further victimized by claims attributed to these alleged perpetrators that Jussie played a role in his own attack. Nothing is further from the truth and anyone claiming otherwise is lying.”