Some “angel families,” or the families of people who have been killed by illegal immigrants, are offended by the suggestion that the U.S.-Mexico border crisis is “manufactured” and believe much of the media does not give them a fair hearing.

The Daily Caller spoke exclusively with Don Rosenberg, Brian McCann, Eric Brady and Sabine Durden, all of whom have lost loved ones at the hands of illegal aliens.

They were asked about the so-called “manufactured crisis,” the media, their support of President Donald Trump and if anyone has called them a bigot because of their stance. Here are their answers:

Sabine Durden recently confronted CNN’s White House correspondent, Jim Acosta, during Trump’s national emergency announcement in the Rose Garden. After Acosta suggested that Trump’s emergency was “manufactured,” Trump turned to the angel moms in his audience, who were holding photos of their deceased loved ones.

Durden said it was another angel mom, Susan Stevens, who said, “This is real.”

Durden then reportedly confronted Acosta soon after that. “Why do you keep telling the lie that [illegal aliens] commit less crimes?” she reportedly asked Acosta. She said Acosta was condescending, putting his hand on his heart in purported sympathy. 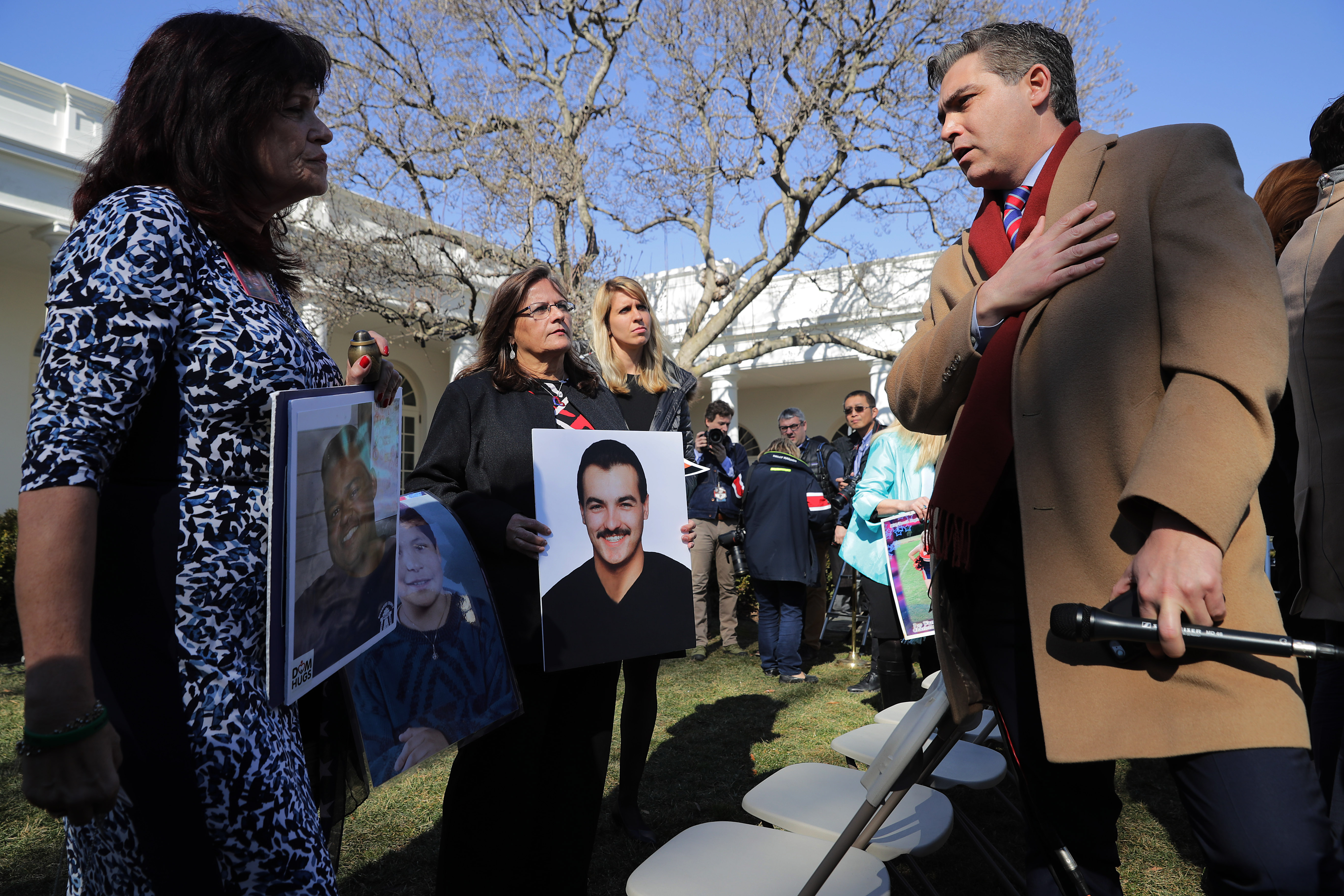 “He’s putting on this little show that he’s so concerned and caring,” Durden said.

During their interaction, Durden said Acosta told her, “What’s not right is I’m being called fake news by the president.”

Durden told Acosta she agreed with the president. She also told the Caller that she did not want to be interviewed on-camera when she confronted Acosta, fearing she would be used as a prop.

Ideally, she hoped to be interviewed in an upcoming segment and gave Acosta her card in hopes of making that happen. She said neither Acosta nor anyone at CNN reached out to her, and that none of the angel moms in her group heard from anyone at CNN.

Durden said that when Acosta went live again for another segment, he offered another angel mom, Agnes Gibney, a chance to speak for less than a minute, in between his own harangues that the numbers are on his side.

During the segment, Acosta held his hand over his heart in the same way he did toward Durden. Gibney also gave Acosta her card.

All four were offended by those like Acosta who deemed this crisis “manufactured.”

Rosenberg said that the central statistic is a bogus one.

Acosta, in his question to President Trump, referred to a study “that shows undocumented immigrants committing crimes at lower levels than native-born born Americans.”

Rosenberg said those studies often analyze crime committed by legal and illegal aliens. She continued that one would expect legal aliens to commit crimes at lower levels since they are screened before they are allowed entry. Any crime, he said, committed by an illegal alien is avoidable because “they shouldn’t be here.”

Rosenberg said there is plenty of evidence that there is a crisis. For instance, a 2018 Government Accountability Office (GAO) report found that one in five federal prisoners is a “criminal alien.”

President Trump, responding to Acosta at the press conference, was likely referring to this report when he said, “The numbers that you gave are wrong. Take a look at our federal prison population. See how many of them — percentage-wise — are illegal aliens.”

Rosenberg said he studied data from the State Criminal Alien Assistance Program (SCAAP) for his home state of California for 2016.

SCAAP provides federal funds to states to offset the expense to house illegal aliens in their jails. In 2016, his analysis found the federal government gave California $67,144,197 to house 42,198 illegal aliens, for a total of 5,096.926 days, which represented 25.40 percent of the California prison population.

The angel family members said the liberal media rarely give this perspective.

“My lament is that our cause doesn’t get in the nightly news,” said McCann. “The whole 24-hour sequence [news cycle]—it has become a problem for every American.”

Of the Los Angeles Times, which he reads regularly, Rosenberg said, “Over the past [four] years I would have to say for every story, etc. that portrays illegal aliens in a bad light there are literally 3,000 to 4,000 just the opposite.”

An email from the Caller to the public relations for the LA Times was not returned.

Rosenberg singled out a recent letter to the editor from Jan. 16, 2019, which stated, in part, “Since there is scant evidence of any real threat to Americans posed by illegal border crossings perhaps Trump can turn his attention to a very real national emergency—the threat to our safety from mass shootings.”

Rosenberg shared an email he sent to Paul Thornton, the LA Times Letters editor, which referred Thornton to the data he also shared with the Caller. Thornton did not respond to him.

An email to Thornton from the Caller was also not returned.

Brady said he had a good experience with his local media, but that no one from CNN or any other mainstream outlet has contacted him except for one news reporter, though he does not believe a story ever materialized.

Brady’s wife was killed on Jan. 1, 2017, by Esteban Tomas, who had a blood alcohol level of more than 0.2 that evening, and had been deported three times prior to the incident.

Durden has had some exposure in the media: “I was the only angel mom on MSNBC,” she said.

She said when she appears in media, she is asked about Trump and his policies and not about what happened to her son. “Dominic was my only child — my best friend,” she said.

Dominic was killed on July 12 at 5:45 p.m. on his motorcycle on his way to work in Morano Valley, California, when Juan Zacarias Lopez Tzun took a wrong turn and smashed into her son, killing him.

Tzun’s truck was uninsured and he had two felonies on his record when he killed Dominic, she said.

In a deal, Tzun was only sentenced to nine months and, because of overcrowding, released after approximately three months. 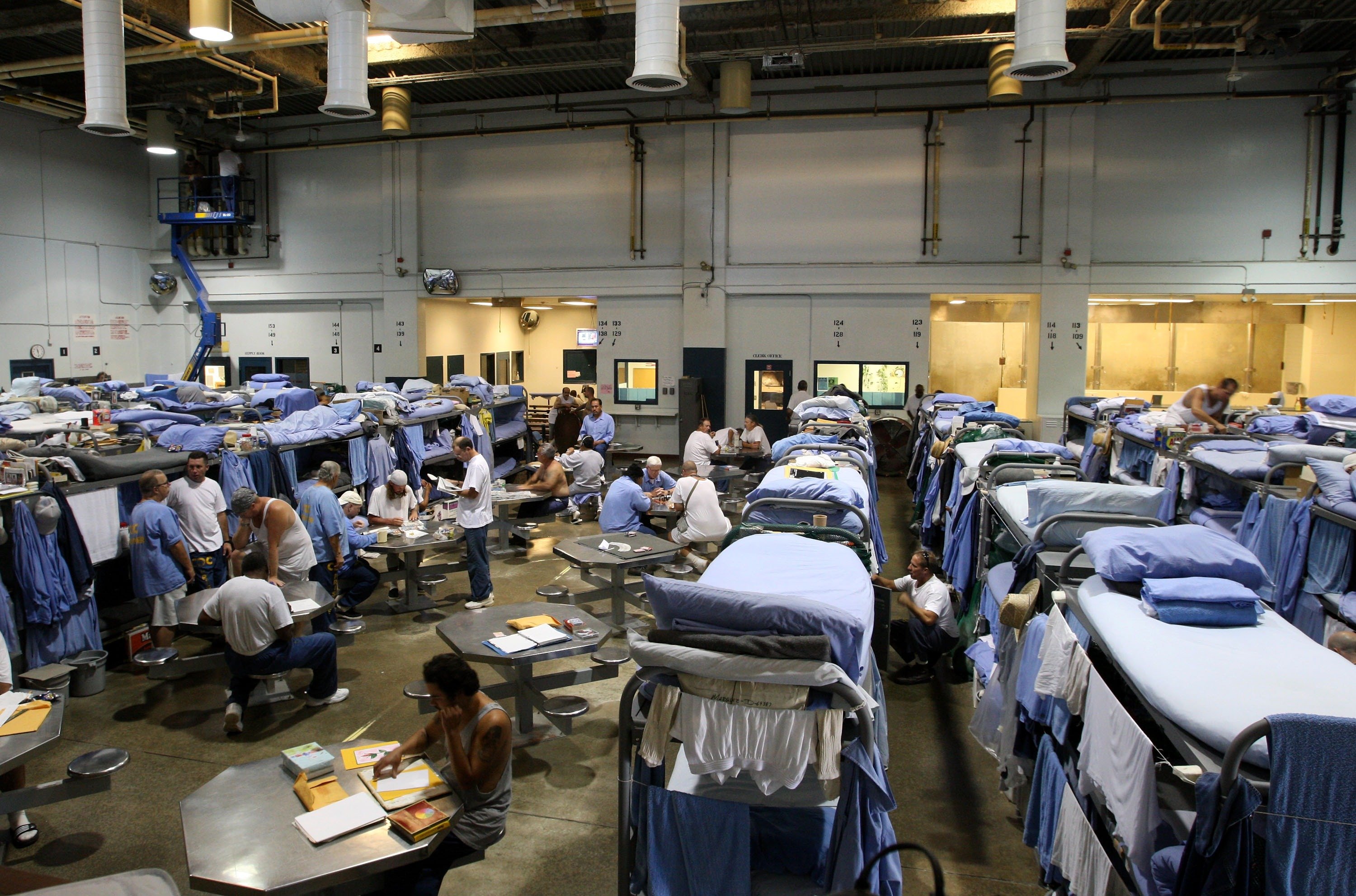 The Mule Creek State Prison has had to modify several facilities to make room for an increasing number of inmates. (Photo by Justin Sullivan/Getty Images)

“He’s moving an agenda that means a lot for a lot of people,” McCann said.

Brady agreed with calling a national emergency because he promised he would do it and followed through. While everyone agreed with the vision, McCann and Rosenberg criticized his execution. McCann specifically said he was not happy with “the way he conducts himself in the office.”

Rosenberg was even more pointed: “We were supposed to get a businessman as president. Where’s the business plan [for immigration reform]?”

He argued that Trump did a poor job of explaining the problem, allowing “the other side to define him,” and noted that little has been tangibly done on illegal immigration.

Not only has Trump’s progress on the wall been slower than expected to those who voted for him, but Trump’s actions on sanctuary policies have mostly been tied up in court. Meanwhile, sanctuary jurisdictions pile up.

Brian McCann’s brother’s killer was released from a Cook County, Illinois jail in 2011 after an ordinance which forbade cooperation between Cook County Sheriff and ICE on detainers—holds for prisoners who would be released from jail but are held for ICE to pick up. At the time, Cook County was one of a handful of counties to pass this type of law.

According to an interactive map done by CIS, there are now over one hundred counties implementing a similar law. While deportations are up from the end of Obama’s term, they are still less than Obama’s peak.

Rosenberg argued that the magnet is jobs and Trump and Congress have not mandated E-verify, the web-based system that allows enrolled employers to confirm the eligibility of their employees to work in the United States.

Dan Cadman is a Fellow at the Center for Immigration Studies, and he concurred, saying, “No, neither Trump nor Congress have done anything to push it. But [in] regard [to] Congress, the perfect opportunity to legislatively mandate E-verify was in the abysmal funding bill that just passed. It would have been a perfect trade-off for some of the many things that the Republicans gave away in the bill.”

On the other hand, Trump has ended the automatic renewal for temporary protected status (TPS) for numerous Latin American countries. TPS granted protections from deportation, but even though it was supposed to be temporary, some nations had their TPS status last for a decade or more.

Rosenberg’s son’s killer came from Honduras, a country which had TPS since 1999.

Trump also ended catch-and-release at the border, but any success has been at the margins, Rosenberg said.

An email to the White House press office was not returned.

Three said they have been called a racist as a result of their illegal immigration stance. McCann said that never happened to him.

“I have been called the KKK,” said Durden. She was even called a Nazi, probably because of her German heritage.

Brady remembered it has also happened to him, but only three or four times.

Rosenberg said he’s been called a racist and white supremacist. He said he’s a registered Democrat who has been an American Civil Liberties Union (ACLU) member for 30 years and a member of the left-wing People for the American Way.