Chinese authorities implied Tuesday the internment camps for Uighur Muslims and other minorities would not disappear until Uighurs forsake Islam or leave China.

The governor of Xinjiang, Shohrat Zakir, and other regional authorities said the camps, which they characterized as vocational training centers, would gradually disappear in the event that “society does not need” them, The Associated Press reported.

Chinese authorities began the camps, however, as part of Chinese President Xi Jinping’s campaign of sinicization — an effort to bring all religions and cultural expressions in China in line with the Chinese Communist Party’s vision of Chinese culture. To that end, camp authorities reportedly subject Uighur Muslims to inhumane conditions, torture and brainwashing to turn them away from Islam and enforce supreme loyalty to the state. (RELATED: China Rages At Accusation That It Is ‘At War With Faith’)

Regional authorities’ claim the camps would disappear when they are no longer needed implies, in light of the camps’ use and other efforts to suppress Islam, Christianity and other religions throughout the country, that Chinese authorities would only do away with the camps once the religions and cultures they believe to be contrary to “sinicization” are purged.

Chinese authorities’ other efforts to snuff out religious expression in the country bear out their intentions. The Chinese government has kidnapped and detained several Christian pastors and shut down their churches for operating apart from Communist Party regulation and registration. Children under the age of 18 are banned from attending religious services and functions in certain regions. Chinese authorities in Xinjiang forbade fasting during Ramadan, the owning and distribution of Korans, wearing beards and public prayer.

Chinese authorities also initiated a program in which Uighur families were forced to accept ethnic Han government agents as new family members. The government agents move in with the families to spy on them and report on their every activity, especially expressions of religion and culture that are deemed out of line with sinicization. 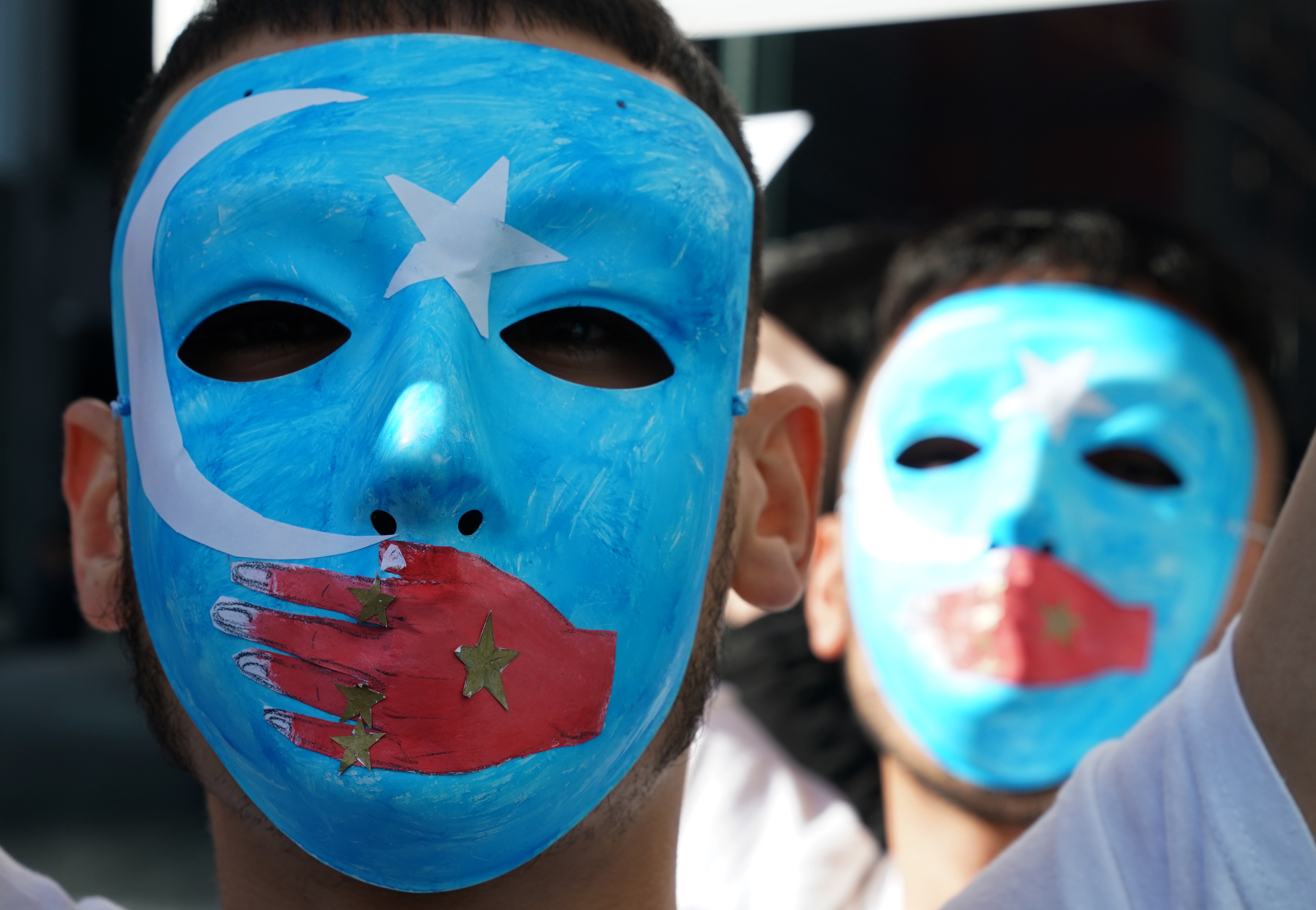 People protest at a Uyghur rally on Feb. 5, 2019 in front of the US Mission to the United Nations, to encourage the State Department to fight for the freedom of the majority-Muslim Uighur population unjustly imprisoned in Chinese concentration camps. (TIMOTHY A. CLARY/AFP/Getty Images)

“The government is trying to destroy that last protected space in which Uighurs have been able to maintain their identity,” said Joanne Smith Finley, an ethnographer at England’s Newcastle University, according to the AP.

Zakir disputed claims that Uighur Muslim detainees, or “trainees” as government officials call them, are subjected to mistreatment and torture. Zakir claimed reports of inhumane conditions and brainwashing of the reported over 1 million detainees are “pure fiction” and that camp authorities “fully ensure freedom of religion” and provide halal food to Muslim inmates.

He likened the internment camps to “boarding schools,” saying inmates could request time off to visit their families.

Mihrigul Tursun, a Uighur Muslim and three-time detainee of an internment camp, recounted forced medical procedures, forced medication without any information as to what the medication was, electro-shock torture and cramped unsanitary living conditions.

Over 270 scholars echoed Tursun’s claims and opposition to the camps in November 2018.

“Reports from eyewitnesses have noted malnourishment and severe psychological distress among the detainees, and some report detainees being forcibly given psychiatric drugs. In some cases, shoelaces and belts are confiscated, due to the prevalence of self-harm and suicide. Those who do not fully participate in political reeducation are often subjected to beatings, solitary confinement, and forms of religious and psychological violation,” the scholars’ joint statement read.

“There have been numerous reports of deaths in the centers, particularly among the elderly and infirm, but also of younger people who were in good health when they were taken. While there are frequent reports of more people entering the camps, there are very few reports of those being released,” it adds.

Sam Brownback, U.S. ambassador-at-large for international religious freedom, also denounced China’s treatment of Uighur Muslims and called Friday for an investigation of the camps. Brownback characterized China’s oppression of the Uighurs as “a deliberate attempt by Beijing to redefine and control these Muslim minority groups, [their] identity, culture and faith.”

Zakir, however, argued that China’s severe security measures and the use of internment camps is justified by the fact that there have not been any violent, Islamic extremist attacks in the region for two years.

“We cannot relax one bit,” Zakir said, confirming the camps will remain for the foreseeable future.