Court documents released last week in a lawsuit involving the Steele dossier revealed new details about the campaign to disseminate the infamous anti-Trump report to the press and within the U.S. government.

Much was already known about Fusion GPS and dossier author Christopher Steele’s efforts to seed the dossier with reporters and government officials. Fusion GPS founder Glenn Simpson orchestrated several meetings between Steele and Washington, D.C.-based journalists prior to the 2016 election. It has also been widely reported that Steele and Simpson met with government officials in an attempt to ensure that Steele’s unverified findings landed on the government’s radar.

A deposition given by David Kramer, a longtime associate of former Sen. John McCain, shed light on even more contacts with reporters and government officials. Kramer’s Dec. 13, 2017, deposition was released on March 14 along with a batch of other documents from a dossier-related lawsuit against BuzzFeed News.

By giving the dossier to government officials, Fusion GPS and Steele were able to create news hooks for journalists to write stories airing the dossier’s unverified allegations.

That was the case with Yahoo! News, Mother Jones, CNN and BuzzFeed News, all of which published stories not about the underlying claims made in the dossier, but about the fact U.S. government officials were handling the document.

Here are all of the contacts that Steele, Simpson and Kramer had with government officials and the press.

Fusion GPS and Steele’s contacts with US government officials

Simpson and Steele, a former MI6 officer, made contact with two separate government officials during the campaign to disseminate the dossier.

Steele met with Justice Department official Bruce Ohr and his wife, a Fusion GPS contractor named Nellie Ohr, on July 30, 2016, to provide some of the information he had gathered in his investigation.

Simpson reached out and met Bruce Ohr on Aug. 22, 2016. Bruce Ohr told Congress on Aug. 28, 2018, that Simpson told him of possible intermediaries between the Trump campaign and Kremlin. Simpson and Bruce Ohr met again on Dec. 10, 2016. During that encounter, Bruce Ohr says Simpson handed him a memory stick with what he believes was a copy of the dossier. (RELATED: Details Emerge About Trump Dossier Firm’s Media Outreach Campaign)

Steele met with Jonathan Winer, a State Department official with close ties to former Secretary of State John Kerry, during summer 2016. He told Winer about the information he had gathered, and Winer wrote a two-page summary to give to others at the State Department.

Simpson reached out to Winer between Sept. 19-22, 2016. In an email, Simpson requested an urgent phone call with Winer. It would later be reported that Winer was a source for Michael Isikoff, the Yahoo! News reporter who wrote the first article laying out the dossier’s allegations against former Trump campaign adviser Carter Page.

Winer did not just receive intelligence from Steele. He also provided the retired spy with dirt gathered by two longtime Hillary Clinton allies, Sidney Blumenthal and Cody Shearer. Blumenthal gave Winer a copy of a report written by Shearer that contained allegations similar to Steele’s dossier. Winer gave that report to Steele who passed it to the FBI.

Simpson contacted several top national security reporters beginning in summer 2016 to arrange meetings with Steele. He also reportedly tipped ABC News reporter Brian Ross off to a Belarus-born businessman who is believed to be a major source for the dossier.

According to the book “Russian Roulette,” Simpson told Ross about Sergei Millian, an obscure businessman who had claimed in one interview that he had links to Trumpworld. During an on-camera interview with Millian on July 29, 2016, Ross asked Millian several questions that mirror allegations made in the dossier.

Simpson also set up meetings in mid-September 2016 between Steele and several other reporters, including Yahoo’s Isikoff, The New Yorker’s Jane Mayer, The Washington Post’s Tom Hamburger and Rosalind Helderman, and Steven Lee Meyer and Eric Lichtblau at The New York Times.

Steele spoke in October 2016 with David Corn, a reporter at Mother Jones who published a dossier-based story on Oct. 31, 2016. Corn provided a copy of the dossier to James Baker who then served as FBI’s general counsel. Corn hoped that Baker would reveal whether the FBI was investigating the dossier’s claims, but Baker told Congress he did not provide any information to the reporter.

Baker would also meet with Michael Sussmann, an attorney at Perkins Coie, the firm that hired Fusion GPS on behalf of the Democratic National Committee. Sussmann provided Baker with information relevant to the Trump-Russia probe but not from the dossier.

He provided similar information to Slate’s Franklin Foer and reporters at The New York Times. Both outlets reported stories about possible links between the servers of the Trump Organization and Alfa Bank, a Russian bank that is identified in the dossier. The allegation of communication between the two servers remains unverified and has been heavily disputed.

In the case of the Isikoff piece, the news hook was that the U.S. government was looking into the allegations from the Steele dossier about Page. From there, Isikoff was able to lay out what the dossier claimed about the former Trump campaign aide, regardless of whether the allegations were true.

The FBI cited Isikoff’s article in its applications for surveillance warrants against Page, a former Trump campaign adviser who is accused in the dossier of being the Trump team’s conduit to the Kremlin.

The dossier itself was published based on a series of news hooks.

CNN reported on Jan. 10, 2017, that former President Barack Obama and then-President-elect Donald Trump had been briefed on portions of the dossier on Jan. 6, 2017. CNN reported the briefing took place and Trump had been told about specific allegations that Russia might use as blackmail material against him.

BuzzFeed followed up an hour later, using the CNN report as a hook to publish the dossier in full.

The FBI itself sought to capitalize on the publication of the dossier, according to text messages that have been made public.

Peter Strzok, the counterintelligence official who led the Trump-Russia probe, texted FBI lawyer Lisa Page following CNN’s report, saying: “Hey let me know when you can talk. We’re discussing whether, now that this is out, we use it as a pretext to go interview some people.”

Prior to that, the FBI had conducted its investigation into the Trump campaign in secret. Few if any Trump associates were interviewed prior to Trump’s inauguration on Jan. 20, 2017.

FBI agents showed up on Jan. 27, 2017, to interview George Papadopoulos at his home in Chicago. The agents initially asked Papadopoulos about Millian, an alleged dossier source who initiated contact with Papadopoulos on July 15, 2017.

Simpson and Steele use McCain to get to Comey

Kramer first learned of the dossier on Nov. 18, 2016, at the Halifax Security Forum. Sir Andrew Wood, an informal adviser to Steele’s company, told Kramer about the document and suggested sharing it with McCain. (RELATED: John McCain Associate Had Contact With A Dozen Reporters About Dossier)

Kramer flew to London on Nov. 28, 2016, to meet with Steele. The two made arrangements there for Kramer to obtain a physical copy of the report from Simpson. 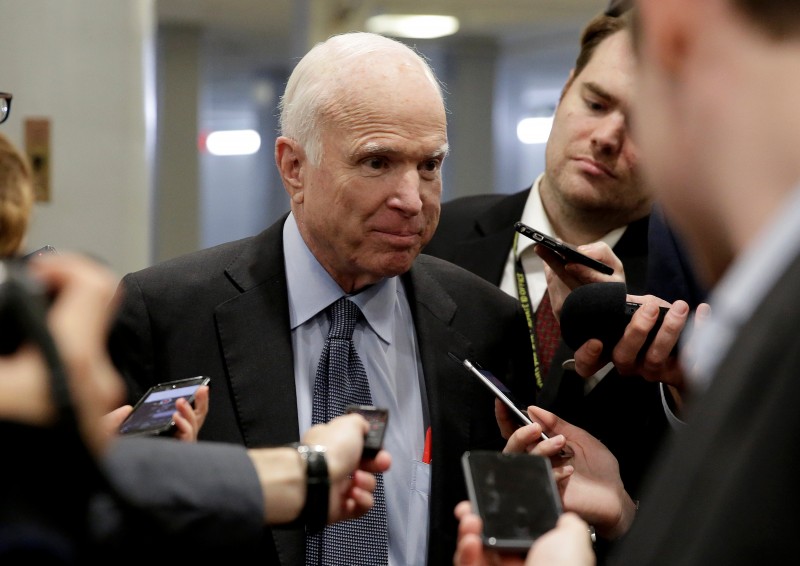 Sen. John McCain, an Arizona Republican, speaks to reporters as he arrives for a vote on Capitol Hill in Washington, U.S., Oct. 18, 2017. REUTERS/Joshua Roberts

After Kramer obtained the document, he shared it with numerous journalists, some at the direction of Steele.

According to his deposition, Kramer provided a copy of the dossier or previewed it to the following reporters: Julian Borger from The Guardian; Corn from Mother Jones; Ross and Matthew Mosk from ABC News; Peter Stone from McClatchy; Fred Hiatt, Hamburger and Helderman from The Washington Post; Bob Little from NPR; Alan Cullison from The Wall Street Journal; Carl Bernstein from CNN and Ken Bensinger from BuzzFeed.

Kramer said in his deposition that Corn and Borger were looking to use McCain’s meeting with former FBI Director James Comey as a news hook to continue publishing on the Steele report. He said the two journalists had somehow learned that McCain was going to meet with Comey.

Kramer also said that Steele wanted him to meet with BuzzFeed’s Bensinger and CNN’s Bernstein. He met with Bensinger on Dec. 28, 2016, where the reporter photographed the dossier. Kramer met with Bernstein days later, on Jan. 3 or Jan. 4, 2017.

The dossier also somehow made its way to lawmakers on Capitol Hill. Former Sen. Harry Reid is believed to have obtained some of the information in August 2016. He wrote a letter to Comey on Aug. 25, 2016, regarding information about possible ties between Trump associates and Russian operatives. Reid met one-on-one with former CIA Director John Brennan.

Kramer also provided a copy of the dossier to Illinois GOP Rep. Adam Kinzinger and the chief of staff of former House Speaker Paul Ryan.

Kramer said in his deposition that McCain asked him to meet with Victoria Nuland, who served as assistant secretary of state for European and Eurasian affairs. Kramer also met with Celeste Wallander who served as senior director for Russia and Eurasia issues on the National Security Council. 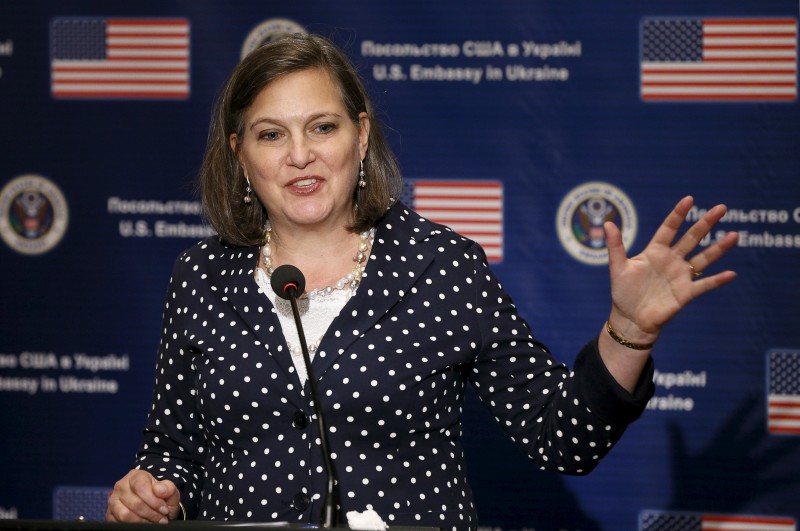 Kramer said McCain wanted to meet with the two officials as part of “due diligence” before meeting with Comey.

Nuland had several encounters with the document and Steele beginning in July 2016. Nuland was who approved FBI agent Michael Gaeta to meet with Steele in Rome on July 5, 2016. Gaeta and Steele had worked together years earlier on an investigation into bribery in FIFA, the international soccer organization.

Nuland was also contacted by Winer regarding Steele’s information. According to both Nuland and Winer, she suggested the information be passed to the FBI. Nuland testified to the Senate Select Committee on Intelligence in June 2018 that Steele visited the State Department in October 2016.