WASHINGTON — D.C. City Councilmember Trayon White Sr. (D-Ward 8) says that a friend was behind the wheel of his BMW when it was involved in what the Metropolitan Police Department (MPD) is investigating as a hit-and-run.

MPD will only release police reports for crashes to the parties involved and their respective legal teams, but The Washington Post was able to obtain a copy of the report, which said a Toyota Camry was struck from behind on Interstate 295 by a BMW with D.C. government plates close to midnight on Monday.

According to the report, the driver of the BMW gave the Camry occupants two phone numbers, promising to call police and give insurance information to the Camry’s driver. But then he “fled the scene without providing the mentioned documentation.”

White lashed out at Fox5 News on Twitter, saying that their report of what he termed “a minor fender bender” as a hit-and-run was inaccurate and “this is why people don’t trust [Fox 5],” adding the hashtag “#fakenews” to his tweet. Fox5 did report the incident as a hit-and-run, as did The Washington Post, attributing the classification to the District’s police chief. 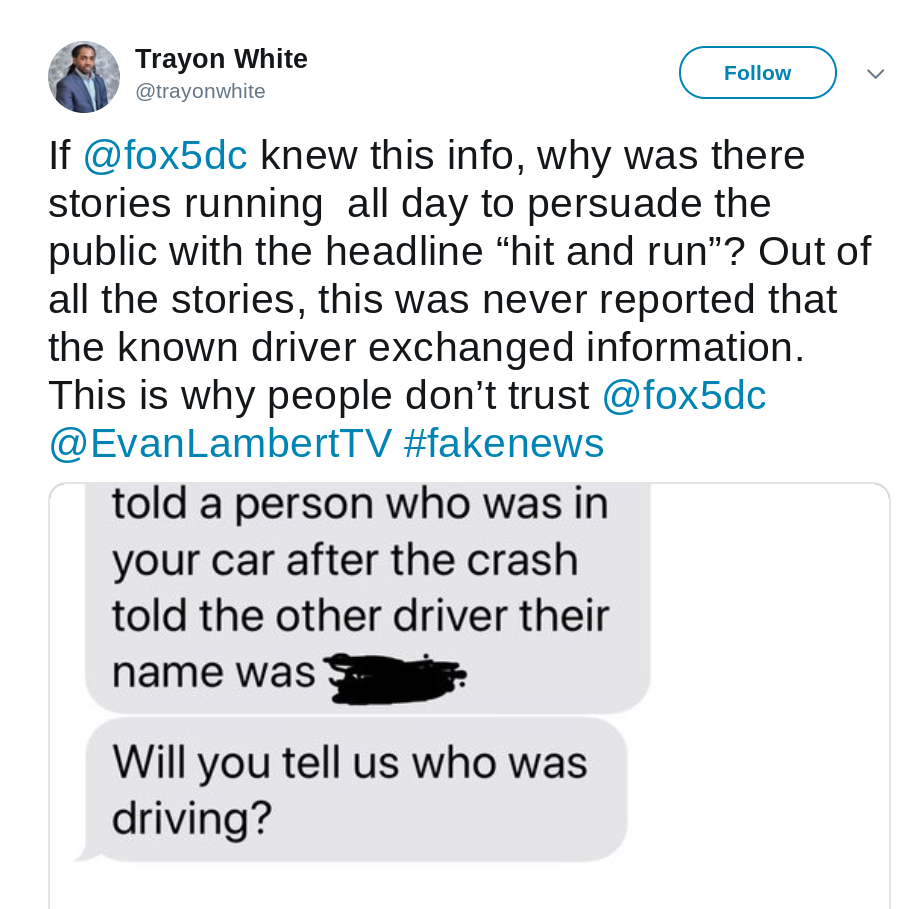 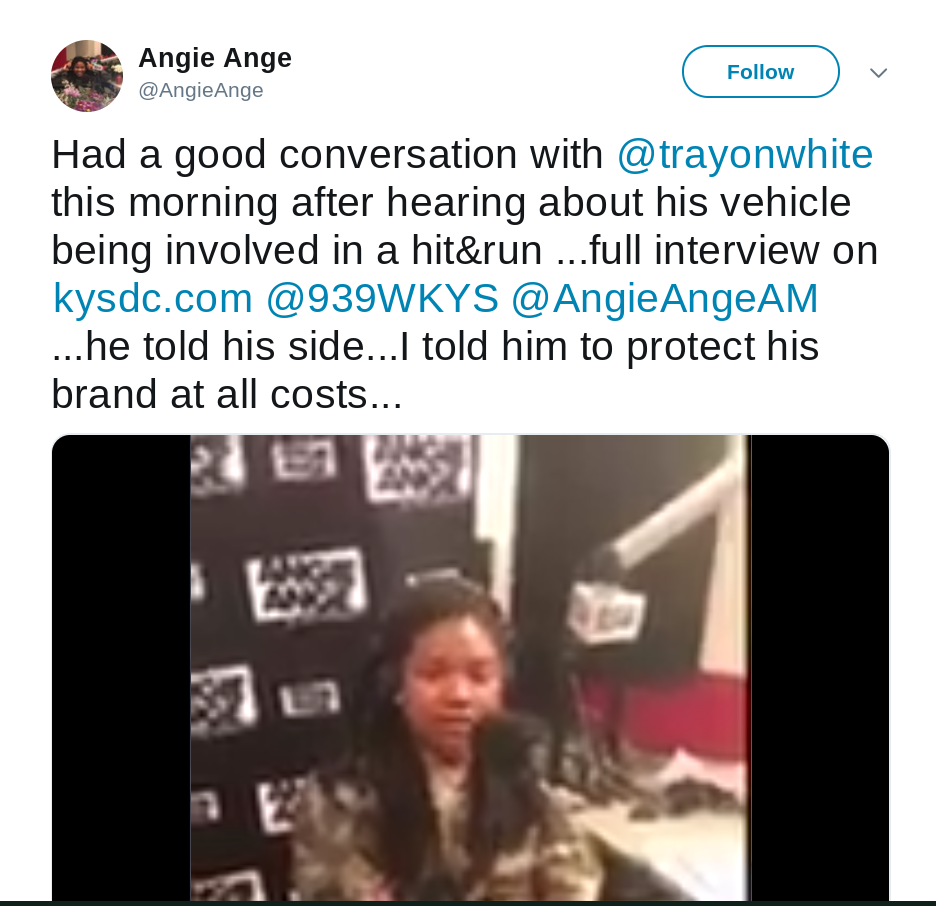 White released a statement saying that the vehicle was taken by a friend without his knowledge or permission. He also called into the “Angie Ange In The Morning” radio show to explain himself, saying that a friend used his spare key to take the vehicle and the media coverage was inaccurate.

“What news don’t tell you is they knew that wasn’t me driving,” White said. “The gentleman who hit the car got out and talked to the people and everything but they don’t wanna mention that part. You know how it goes.”

When asked how that friend was able to take a car that says Councilmember Ward 8 on its official plates, White responded, “Exactly. Exactly.”

White then retweeted Angie Ange’s clip of their interview, where she said she advised him to “protect his brand… at all costs.”

Had a good conversation with @trayonwhite this morning after hearing about his vehicle being involved in a hit&run …full interview on https://t.co/MYXRqVqjtB @939WKYS @AngieAngeAM …he told his side…I told him to protect his brand at all costs… pic.twitter.com/vppBCaLbbZ

White made headlines not long ago when he claimed Jews control the weather. A subsequent apology visit to the Holocaust Museum was bungled when members of his staff compared a Warsaw ghetto to “a gated community” and White himself left early, something many considered quite rude, especially given the circumstances.

The morning after the hit-and-run, the D.C. City Council held a special legislative meeting to reprimand another Democrat, Jack Evans, for separate ethics violations.

The hit-and-run involving Trayon’s White vehicle had not yet been reported by the media and White spoke at the meeting, saying, “We take an oath to faithfully discharge the duties of our office,” before reading aloud several sections from the Code of Conduct.

“[Evans] is entitled to due process,” said White, “but in the meantime we must ensure that we’re doing our due diligence in upholding our rules and laws that we took an oath to abide by.”