Republican Utah Sen. Mike Lee argued against the Green New Deal on Tuesday by mocking two of the most controversial, and often ridiculed, policy proposals in the resolution: eliminating air travel and flatulating cows.

Lee began his speech by displaying an image of former President Ronald Reagan firing a machine gun while riding on the back of a dinosaur, waving an American flag.

“You’ll notice a couple of features here: the rocket launcher strapped to President Reagan’s back, and then the stirring, unmistakeable patriotism of the velociraptor holding up a tattered American flag, a symbol of all it means to be an American,” Lee explained. “Now, critics might quibble with this depiction with this climactic battle of the Cold War because, while awesome, in real life there was no climactic battle. There’s no battle with or without velociraptors.”

“The Cold War as we all know, was won without firing a shot,” he continued. “But that quibble actually serves our purposes here today because this image has as much to do with overcoming Communism in the 20th century as the Green New Deal has to do with overcoming climate change in the 21st.” 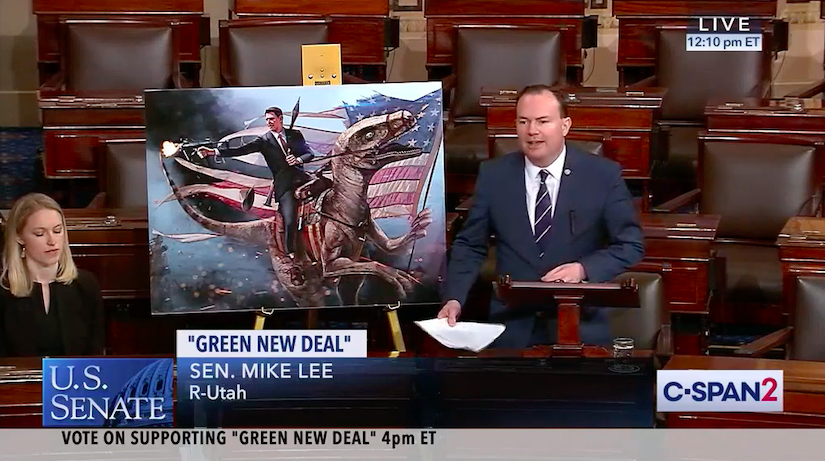 Lee argued that there is not even one serious proposal in the entire Green New Deal and singled out the resolution’s call for a World War II-style mobilization effort to eliminate greenhouse gas emissions like methane, that arise from cow flatulence. He also highlighted the call to rid air travel.

“We set a goal to get to net-zero, rather than zero emissions, in 10 years because we aren’t sure that we’ll be able to fully get rid of farting cows and airplanes that fast,” reads the initial version of the resolution’s fact-sheet, which has since been removed.

“In a future without air travel, how are we supposed to get around the vast expanses of say, Alaska? I’ll tell you how: Tauntauns!” Lee said, taking out a second image of Luke Skywalker riding a Tauntauns in Star Wars. (RELATED: Liz Cheney Stumps Green New Dealers With One Question: Did You Fly Here?)

“This is a beloved species of repto-mammals native to the ice planet of Hoth,” Lee said. “While perhaps not as efficient in some ways, as airplanes or snow mobiles, these hairy bipedal species of space lizards offer their own unique benefits: Not only are Tauntauns carbon-neutral, but according to a report a long time ago and issued far far away, they may even be fully recyclable.” 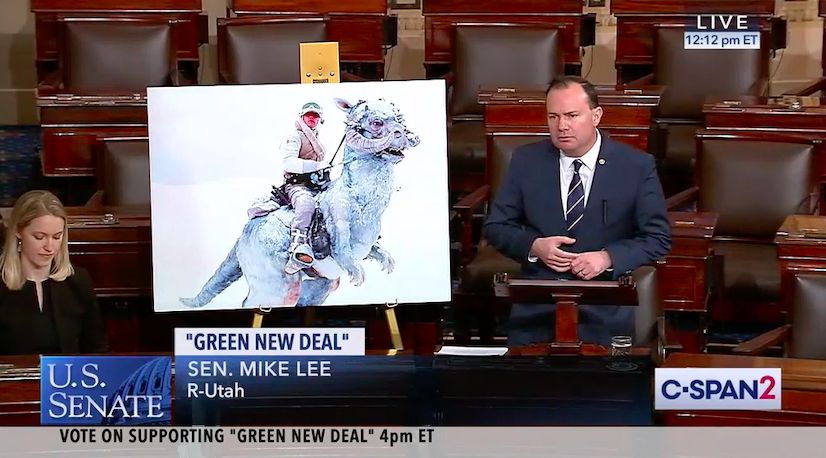 The Utah senator also argued that the abolishment of air travel would be especially difficult for a place like Hawaii, which is warm, isolated, and heavily reliant on tourism. Without airplanes, he explained, Hawaiians may be best served to look to Aquaman, the super hero from the sea kingdom of Atlantis, who Lee pointed out was also “a founding member of the Super Friends.”

“I draw your attention to the 20-foot impressive seahorse he’s riding,” Lee said showing a picture of Aquaman. “Under the Green New Deal, this is probably Hawaii’s best bet.” (RELATED: Mitch McConnell Poised To Vote On New Green Deal: ‘I Could Not Be More Glad)

“Now, I’m the first to admit that a massive fleet of giant, highly trained seahorses would be cool, it would be really, really awesome, but we have to consider a few things — we have no idea about scalability, or domestic capacity in this sector,” Lee said. The last thing we want is to ban all airplanes only then to find out that China or Russia may have already established strategic, hippocampus programs designed to cut the United States out of the global market.”

Continuing on to what Lee considered to be the second unserious proposal in the Green New Deal, eliminating farting cows, he noted “if they think the cows smell bad, just wait until the get a whiff of the seahorses.”

“The authors of this proposal will protest that these goals are not actually part of the Green New Deal but were merely included in supporting documents accidentally sent out by the office of the lead sponsor in the House of Representatives,” Lee said in reference to Ocasio-Cortez. “This only makes my point: the supporters of the Green New Deal want Americans to trust them to reorganize our entire society, our entire economy, to restructure out entire way of life, and they couldn’t even figure out how to send out the right press release.”

“The Green New Deal is not a serious policy document because it’s not a policy document at all. It is, in fact, an aesthetic look,” he continued. “The resolution is not an agenda of solutions, it’s a token of elite tribal identity and endorsing it, a public act of piety for the chic and woke.”