Wednesday’s arguments — concerning a Republican gerrymander in North Carolina and a Democratic one in Maryland — were the second time in as many years that the Supreme Court has considered whether it should police district maps that are rigged to the benefit of one party. The justices effectively punted after encountering the issue in 2018.

Partisan line-drawing divides the Court along familiar ideological lines. While the liberal justices see an urgent threat to democracy that the high court alone can address, the conservatives are wary of judicial intervention in the highly-politicized redistricting process. They are also skeptical that the Court can formulate clear and predictable rules to stop gerrymanders.

That dynamic carried during Wednesday arguments, where the conservatives urged a cautious course while the liberal bloc inveighed against maps that permanently entrench a particular party. Chief Justice John Roberts and Justice Brett Kavanaugh held the balance of power.

Though both men seemed dubious of a judicial solution to partisan map-making, there were also signs that they were sympathetic to the arguments gerrymandering opponents advanced.

“Have we reached the moment, even though it would be a big lift for this Court to get involved, where the other actors can’t do it?” Kavanaugh asked Allison Riggs, a voting rights lawyer who represented the North Carolina plaintiffs.

Kavanaugh also repeatedly wondered if the Constitution’s equal protection clause requires proportional representation in the legislatures — that is, that the composition of the legislature should closely follow the results of an election. It was unclear how seriously he entertained the thought, however.

Roberts seemed open to arguments that gerrymandering violates the First Amendment. Plaintiffs in both cases say partisan line-drawing punishes voters for their political choices while violating their rights of association and representation.

“It does seem that this is a situation where the state is taking retaliatory action against Republicans who were in that district…and penalizing them for exercising their right to vote,” Roberts said with respect to the Maryland case.

Justices Stephen Breyer and Elena Kagan emphasized that the cases before the Court represented gerrymandering at its most extreme. They said the courts could reasonably regulate outlier cases of extreme partisanship, without wading too far into politics.

“Does one person have one vote that counts equally with others if the impact of her vote is reduced based on her party affiliation?” Ginsburg asked, referencing a foundational 1964 case that requires equal population among voting districts.

Justice Neil Gorsuch noted that approximately 20 states have implemented measures like nonpartisan commissions to produce fair maps in recent years, as popular opposition to gerrymandering has deepened. As such, he wondered if the Court should take up a problem the political process is already addressing.

“My sense is there’s a lot of movement in this area,” Gorsuch said. State supreme courts have similarly taken a harder line against partisan mapmaking as late. (RELATED: When Clarence Thomas Speaks)

The first case arose in North Carolina, where Republicans have commanded a lopsided majority in the state congressional delegation for most of the last decade, despite splitting the statewide vote evenly with Democrats. A three-judge district court sided with a coalition of voters and advocacy groups challenging North Carolina’s map, and forbade its use after the 2018 elections.

Positions are reversed in the second case, where Republican voters are challenging the boundaries of Maryland’s 6th Congressional District. Once a GOP bastion, Maryland Democrats tweaked the 6th district’s boundaries after the 2010 census, moving thousands of Democrats into that jurisdiction. As a result, longtime GOP Rep. Roscoe Bartlett lost his re-election bid in 2012.

As with the North Carolina case, a lower court found in favor of the plaintiffs. Wednesday was the second time the justices considered the Maryland case — in 2018 they returned it to a lower court on a technical issue. 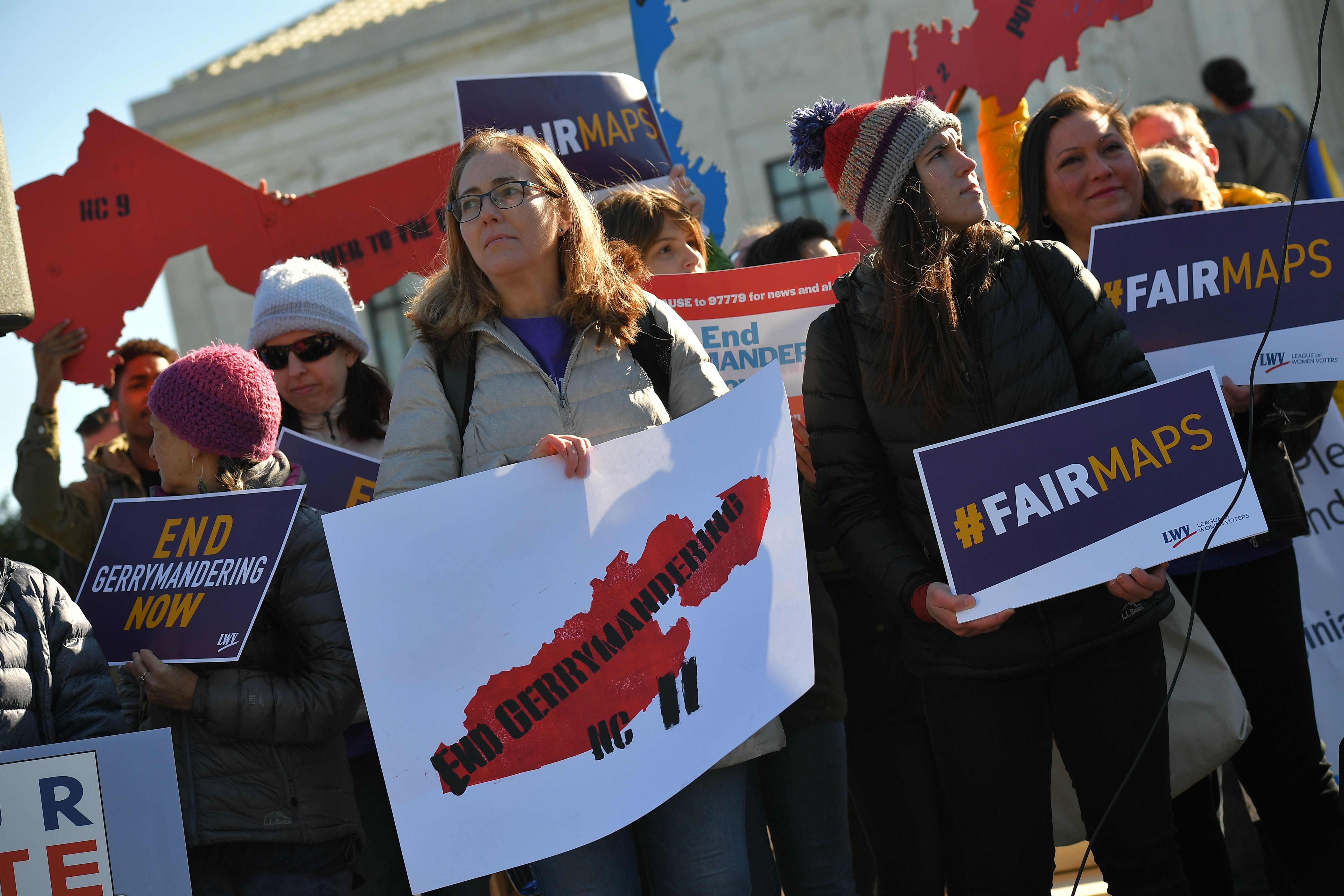 Demonstrators rally in front of the Supreme Court on March 26, 2019. (Mandel Ngan/AFP/Getty Images)

That lawmakers drew district lines to favor the party in power is not seriously disputed in either case.

“I propose that we draw the maps to give a partisan advantage to 10 Republicans and three Democrats because I do not believe it’s possible to draw a map with 11 Republicans and two Democrats,” GOP state Rep. David Lewis said during the line-drawing process. Lewis led the legislature’s redistricting efforts.

Maryland Democrats were similarly brazen. During a deposition at an earlier phase of the litigation, former Democratic Gov. Martin O’Malley volunteered that he wanted to turn the 6th District into a jurisdiction that would oust Bartlett and elect a Democrat.

Lawyer Paul Clement, who represented North Carolina’s lawmakers, highlighted the historic stakes of Wednesday’s cases, noting gerrymandering has been a feature of American politics since the founding of the republic. Putting partisan map making under judicial supervision, he said, would be a rupture with the practice of the founding era.

“Neither of them contemplated suit,” Clement added.

Rulings in both cases, Rucho v. Common Cause and Lamone v. Benisek, are expected by June.

Disclosure: The reporter’s wife was involved in the Rucho litigation.