“Just dropping in to remind everyone men are the worst.”

— Kelly Cohen, freelance writer, formerly with the Washington Examiner. NewsBusters Managing Editor Curtis Houck reminded her that women can be a nightmare, too. “And plenty of girls are the same. Dishonesty is always bad!” he wrote.

“tfw you realize you will be on vacation on another continent when the Mueller report hits.” — Matthew Gertz, senior fellow, Media Matters.

“This [Democratic] staffer on the Hill was going to ask Alexandria Ocasio Cortez [D-N.Y.] to sign his photo with her and was told by his office if he wanted to preserve his career on the Hill he better not ask.” — Mirror spy. (AOC On What It’s Really Like To be So Popular)

“I just got into a massive argument with a telemarketer. How’s your Friday going?” — Beth Baumann, associate editor, Townhall.

“Feels very hard not to be well enough to cover all this. I hope that my mental health returns soon. This may be a grisly political time but it is also a huge privilege to write about – and I hope those with the luck and good health to do so have chance to step back and see that.” — Isabel Hardman, assistant editor, The Spectator.

“People say its boot-edge-edge but i thought it was more like boot-eh-jedge. but I’m British so all my vowels are fucked up anyway.” — Libby Watson, political reporter, Splinter News, on South Bend’s mayor and presidential hopeful Pete Buttigieg.

Moral of the Story: NBC’s Dafna Linzer needs to say ‘off the record’ A LOT sooner

This is the story of HuffPost and New York Mag freelancer Yasher Ali, who wrote about what barely amounts to a news tip. It’s more of a calendar item. But this shows you how hysterical people get in media and politics.  Ali had 25 thoughts. Around 12 I started skipping some to maintain reader sanity. Of course, CNN’s Chief Media Correspondent Brian Stelter had to inject his way into this story and get a “no comment” from NBC. “Looks like they’re banking on a weekend memory hole,” remarked TheWrap‘s media writer Jon Levine.

1. Yesterday, I received a call from @DafnaLinzer who serves as managing editor of NBC/MSNBC politics. Dafna’s conduct during the call was highly inappropriate and unethical. So what was the purpose of her call? She called me to bully me on behalf of the DNC.

2. Dafna, who oversees the political coverage for NBC and MSNBC, was calling to bully me into delaying the publication of an innocuous scoop and at no point did she advocate for her network, it was only about the DNC. Here’s how this all started…

4. At first I thought it was just a fun tidbit that I could tweet out. But after I called several presidential campaign staffers I learn that all the Dem campaigns were desperate to learn what the dates were going to be. I decided to post the scoop as an item in my newsletter.

5. This wasn’t a huge scoop but it was a decent one so I quickly called the DNC to fact-check the tip as I was running out of time: the dates would be announced on MSNBC in the 4:00 PM hour. It’s important to note that almost of all of my communication with the DNC was off record.

6. So I won’t share most of what was said but can tell you it’s pretty run-of-the mill stuff. I asked the DNC if my tip was accurate and they asked if they could call me back in 10 minutes. A few minutes later they called back and asked if I could delay posting my scoop.

7. For another hour so they could go through their important notification calls to the state parties. I told them I couldn’t wait as the news would leak and leave me without a story. That’s all I can say about the call. Two minutes later I received a call from Dafna.

8. I’ve never spoken to Dafna by phone. A couple years ago she reached out to me to see if I wanted to have coffee and talk about working at NBC News but I declined as I was actively investigating NBC matters and thought it would be strange if I discussed a job.

9. So when I saw Dafna calling I assumed she would ask me to consider delaying my post so that MSNBC could announce it first. Given that this was an innocuous scoop and not some investigative story I wouldn’t have lost sleep if I had delayed. But that’s not why she was calling.

10. After exchanging pleasantries, Dafna told me that she received a call from the DNC and was told I had a story. Now it’s not strange that the DNC called her, they were coordinating an announcement. What was strange was that she was calling me and taking a menacing tone.

11. She asked if I could hold the story and I said I couldn’t. She was agitated, “why not?” I said I’m not going to lose a scoop. Then she got angrier and said “Why not? It’s not a big deal, let them make a few phone calls.”

14. Dafna reminded me she was a nat sec reporter at WAPO for ten years and they would hold stuff all the time (note: so people wouldn’t get killed). “Why can’t you just wait, let them make their calls, then you’ll be the first to put it into print,” she said.

15. I couldn’t believe what she was saying. Again, it was fine for me to print the story an hour later, beat her own network by three hours, she just wanted me to let the DNC inform state party leaders. Why the hell did she care?

17. I was so surprised me that she was talking this way with a total stranger. The head of the political division was trying to bully me at the behest of the DNC over a dumb scoop (even though they may not have asked her to).

18. 2/3 of the way into the conversation Dafna started a sentence with “this is off the record.” She hadn’t said it at the beginning of our conversation and most important at no point did I agree when she said “off record” to keep it off record.

19. I’m not one of those gotcha reporters, I think it’s bad for sourcing relationships to make people like they constantly feel like they have to say “off record.” But Dafna isn’t a source and she was calling to intimidate me, so she doesn’t get the benefit.

20. She said “off record” one more time later in the call and again I just let her keep talking, I did not agree to anything. I then told her I had to go talk to my editor and she got even more frustrated and said “No. I want to talk to you about this.”

21. I said “no, I want to go talk to my editor.” Then she sent me over the edge and said “What’s your editors name, I want to talk to them.” She was trying to intimidate me..on behalf of the DNC. I ended the call.

22. After the call with Dafna I published the stupid scoop. Then I did a gut check and over the next two hours I called 10 experienced prominent reporters and told them the story. They were all stunned by what Dafna did and encouraged me to share it publicly.

23. I’m not naive to the fact that this incident is going to be twisted by some with an agenda to discredit the media and say they collude with political parties. But I think its more important to expose bad behavior then keep it under wraps. What Dafna did was unethical.

25. What I can’t figure out is (and no one else I spoke to could understand), why open yourself up to this for a stupid story? How was this worth it? 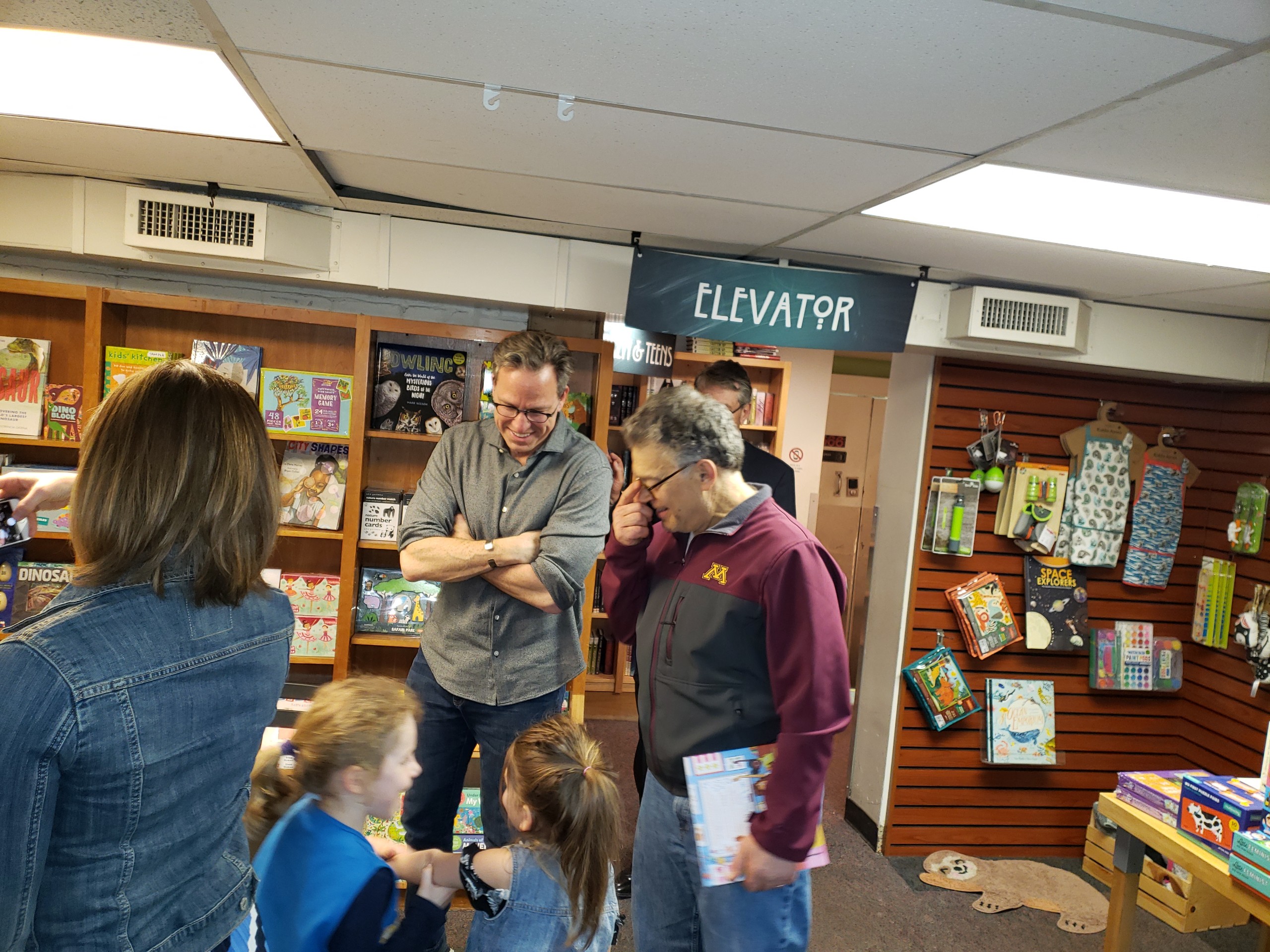 On Thursday night, Franken and Tapper were spotted at Washington’s upper NW bookshop to promote Tapper’s daughter Alice‘s new book, Raise Your Hand. Tapper interviewed his daughter. Franken left the Senate after pictures surfaced of him touching a woman’s breasts as she slept. The ex-senator was there for, er, moral support. Sources tell me Tapper had a security detail. Police were also outside on the street. A witness described him as Tapper’s “goon for the night.”

“’What’s your name?’ ‘Seung Min.’ ‘What?’ ‘Seung Min.’ ‘That’s too hard. Can I just call you Sally?’ (True story — at an internship years ago when I was interviewing someone)” — Seung Min Kim, White House reporter, The Washington Post.

Barbara Bush once allegedly considered suicide over her husband’s rumored hanky panky. Here. The news emerged in a book by USA Washington Bureau Chief Susan Page called The Matriarch: Barbara Bush and the Making of an American Dynasty.

Press Pool in a Picture