If there were ever any doubt about where the overwhelming majority of Democratic 2020 presidential candidates stand on the issue of slavery reparations, this week’s National Action Network (NAN) conference cleared it up.

Virtually every presidential contender who spoke at Al Sharpton’s event was asked by the civil rights activist if they support slavery reparations. To a person, their answer was a resounding yes.

Specifically, Sharpton wanted to know if they support H.R. 40, a bill originally introduced by former Democratic Michigan Rep. John Conyers in 1989 and reintroduced by Democratic Texas Rep. Sheila Jackson Lee this year that would create a “Commission to Study and Develop Reparation Proposals for African-Americans to examine slavery and discrimination in the colonies and the United States from 1619 to the present and recommend appropriate remedies.” (RELATED: 2020 Democrats Support Slavery Reparations: What Does This Mean?)

Here’s a summary of where each candidate stands on slavery reparations thus far: 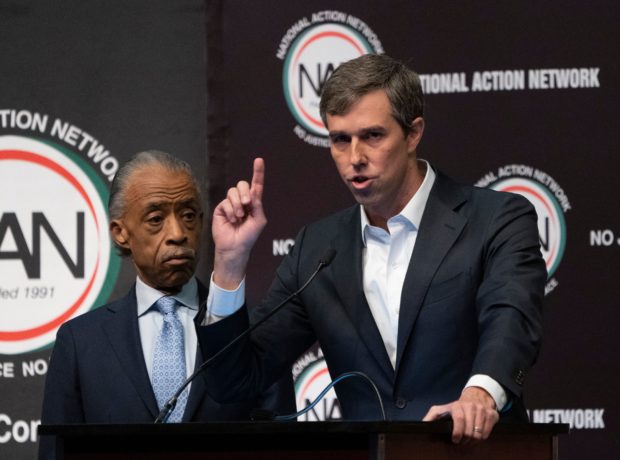 Presidential candidate Beto O’Rourke(D-TX) speaks next to Rev. Al Sharpton(L) during a gathering of the National Action Network on April 3, 2019 in New York. (Photo by Don Emmert / AFP)

While the Vermont senator had previously seemed reluctant about simply “writing a check” to black Americans, he told Sharpton on Friday that if a reparations bill is passed by the House and Senate, “of course I will sign it.”

“There needs to be a study,” said Sanders. “Let me also say this. I think what we need to do is to pay real attention to the most distressed communities in America. We have got to use 10% of all federal funds to make sure that kids who need it get the education, get the jobs, get the environmental protection that they need. And that would be a major focus of my efforts.” 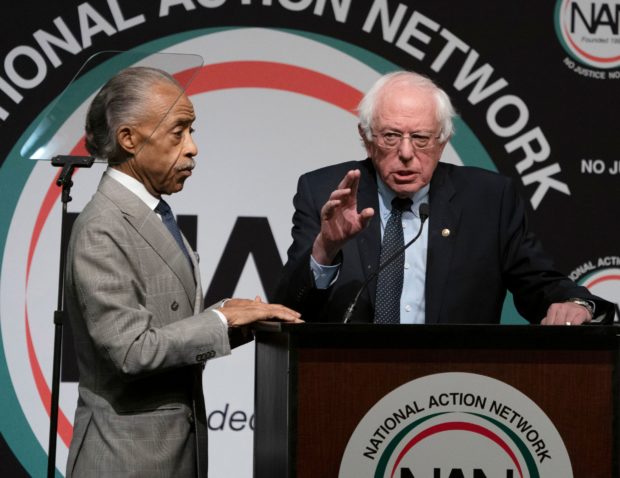 Democratic Presidential candidate Bernie Sanders (R) is joined by the Reverend Al Sharpton during a gathering of the National Action Network April 5, 2019 in New York. (Photo by Don Emmert / AFP)

The California senator said in February she supported some form of reparations. “We have got to recognize, back to that earlier point, people aren’t starting out on the same base in terms of their ability to succeed,” she told “The Breakfast Club” radio show. “So we have got to recognize that and give people a lift up.”

“When I am elected president, I will sign that bill,” she said Friday, referring to H.R. 40.

“We have to be honest that people in this country do not start from the same place or have access to the same opportunities,” Warren told The New York Times in February. “I’m serious about taking an approach that would change policies and structures and make real investments in black communities.”

“So I believe it’s time to start the national full-blown conversation about reparations in this country,” she said this week at NAN. “And that means I support the bill in the House to appoint a congressional panel of experts, people that are studying this and talk about different ways we may be able to do it and make a report back to Congress, so that we can as a nation do what’s right and begin to heal.” 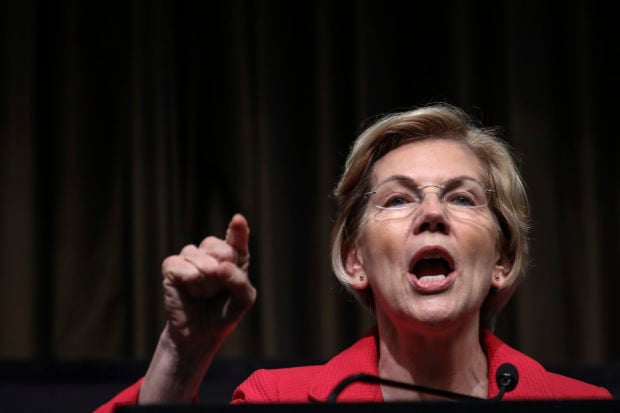 “I firmly support Congresswoman Jackson Lee’s bill to create a commission to study reparations,” Gillibrand told NAN attendees during her speech. “As president, I would advocate Congress to pass that bill and I would sign that bill into law. This is the first step that 100 years of slavery and institutional racism have caused mass inequity and harm to black people and has held black communities back for generations from achieving their full potential.” 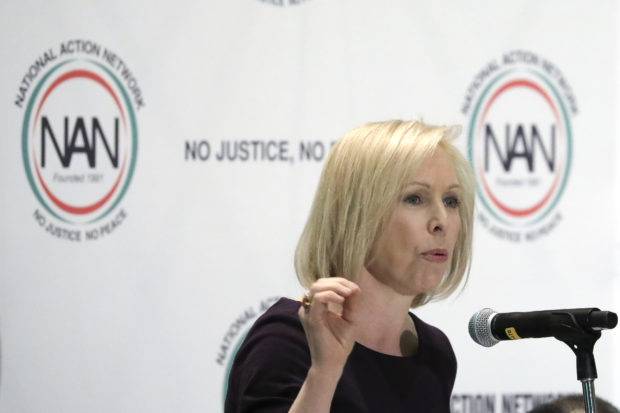 The Minnesota senator wasn’t directly asked the question by Sharpton at the NAC conference, but she told NBC’s Chuck Todd last month that while it’s a debate worth having, reparations do not necessarily “have to be a direct pay” for every individual.

“I believe we have to invest in those communities that have been so hurt by racism. It doesn’t have to be a direct pay for each person,” she said.

The former Colorado governor told NAN attendees that slavery is “the nagging unrelenting shame of America, that continues to deny the true promise of this country to too many of its citizens. We must own our past, and acknowledge the shame, the sin, the injustice, and the ongoing consequences of enslaving an entire race of people. And we must apologize and that apology should come from the Oval Office.” 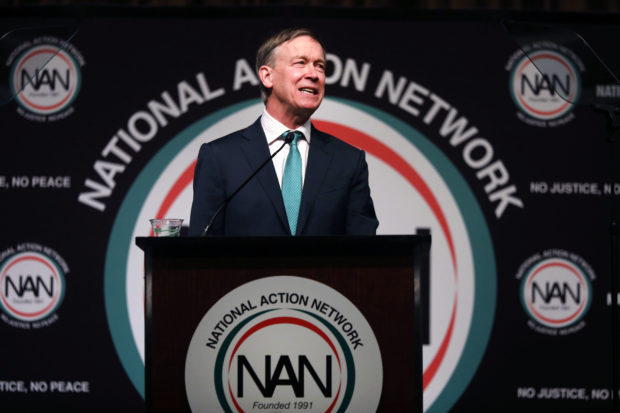 “I’ve said that if under our Constitution that we compensate if we take their property, why wouldn’t we compensate people who were considered property and sanctioned by the state?” Castro, an early proponent of the idea, told NAN attendees. “I believe that for the black community, for the white community, for every other American — that it is important to address that original sin, and until we do we may feel like we’re moving forward as one nation, but I don’t think that we ever will.”

“Do I support legislation that is race-conscious about balancing the economic scales? Not only do I support it, but I have legislation that actually does it,” the New Jersey senator, an on-record supporter of H.R. 40, told CNN anchor Jake Tapper last month.

Yang called the idea of reparations a “logical step,” but told NAN attendees he would “go again further.”

“I would put $1,000 a month in the hands of every adult starting at age 18 and then I would say this is not reparations,” Yang said. “We need to study reparations independently of the fact that we can make this economy work for you all, minimum, minimum.” 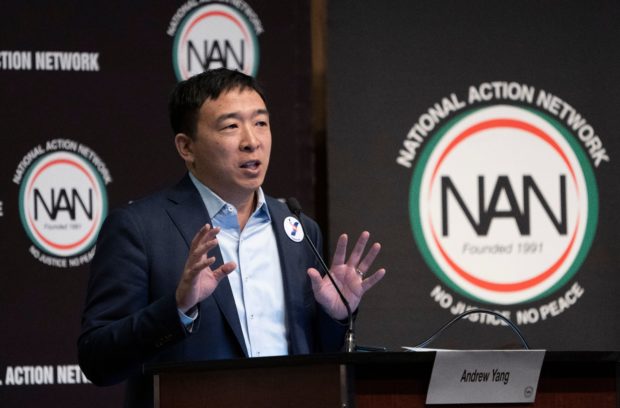 “The country as a whole is effectively segregated by race and the resources are different,” the South Bend, Indiana mayor said Thursday at NAN. “There is a direct connection between exclusion in the past and exclusion in the present.”

The Hawaii congresswoman is a cosponsor of H.R. 40.

Both candidates expressed their support of the concept at this week’s NAN conference.

The former Starbucks CEO and potential independent candidate reportedly wasn’t asked the question at the NAN conference, but said in an interview last month that he would “rather look forward than look back.”

“And in looking forward, I think there are ways to address this issue. I would have a different view, and mine would be looking forward, not backwards, in how to invest significant support, dollars and programs within the African American community,” he said.