Former Trump lawyer Michael Cohen accidentally dealt with a former high-level Russian politico because Cohen Googled him incorrectly and thought he was someone else, according to the Mueller report.

Then after that person — whom Cohen thought was a weightlifter — questioned Cohen’s gravitas, Cohen tried to contact the Russian government by emailing an address for its press relations department, but that failed because Cohen typed “.gof” instead of “.gov,” the report said.

While the Trump Organization was negotiating in November 2015 with a Russian company who wanted to license the Trump name for a tower in Moscow, a woman named Lana Erchova “emailed Ivanka Trump on behalf of Erchova’s then-husband Dmitry Klokov, to offer Klokov’s assistance to the Trump Campaign.”

In the email, Erchova identified herself as Lana E. Alexander, but said “if you ask anyone who knows Russian to google my husband Dmitry Klokov, you’ll see who he is close to and that he has done Putin’s political campaigns.” Klokov was at the time director of external communications for a large electrical company and was previous press secretary to Russian’s energy minister.

Ivanka forwarded the email to Cohen, who was central in the Moscow tower talks and asked for his guidance.

Cohen told the special counsel that “after receiving this inquiry, he had conducted an internet search for Klokov’s name and concluded (incorrectly) that Klokov was a former Olympic weightlifter,” the report said.

Cohen then proceeded to exchange emails and at least one call with the “weightlifter.” (RELATED: Michael Cohen Tried To Make Millions By Putting A US Nuclear Plant Partly In Hands Of Qatar)

In these conversations, Klokov talked about how he could offer “synergy on a government level” in Russia, where Cohen believed he needed government approval for the tower to proceed. He said he could set up a meeting with Russian President Vladimir Putin.

Yet even nine months later in an August 2018 interview with the special counsel, Cohen said he still thought he was talking to a weightlifter.

“During his interviews with the Office, Cohen still appeared to believe that the Klokov he spoke with was that Olympian,” a footnote in the Mueller report says.

Cohen told the special counsel he declined to set up a meeting with Russian officials through Klokov because he had his own connections, through Alex Satar. But Satar’s supposed connections didn’t materialize, so Cohen tried to email the Russian government’s press secretary.

The press secretary’s name is Dmitry Peskov, and Cohen tried to email pr_peskova@prpress.gov.ru.

But he typed the address wrong, writing “.gof” instead of “.gov.”

“So the email apparently did not go through,” the Mueller report said.

Cohen went to Cooley Law School, which has been called the worst law school in the country.

In June, Buzzfeed reported — incorrectly, but mirroring what Michael Cohen thought to be true — that Ivanka had been speaking with a Russian weightlifter, citing “emails reviewed by BuzzFeed News and four sources with knowledge of the matter.”

BuzzFeed said in the emails Cohen exchanged with Klokov, Cohen rebuffed Klokov, but the Russian questioned Cohen’s authority to speak for the Trumps, and cc’d Ivanka.

One source told Buzzfeed that Ivanka was frustrated with Cohen for not dealing with Klokov. 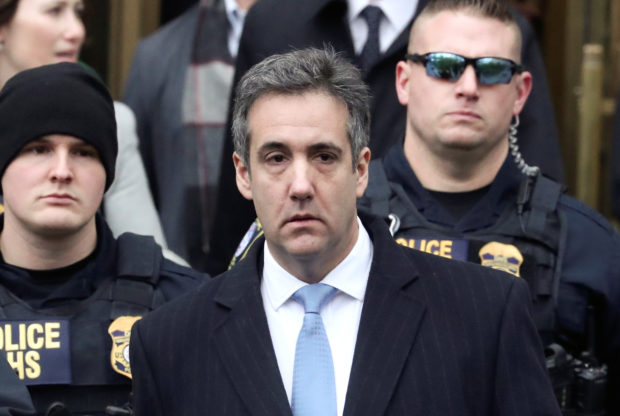 That is not the last of the curious case of the non-weightlifter.

In July 2018, the special counsel’s office “received an unsolicited email purporting to be from Erchova, in which she wrote that ‘[a]t the end of 2015 and beginning of 2016 I was asked by my ex-husband to contact Ivanka Trump … and offer cooperation to Trump’s team on behalf of the Russian officials.”

Mueller wrote in her report that “In order to vet the email’s claims, the Office responded requesting more details. The Office did not receive any reply.” (RELATED: 2 Years Later And With Access To Classified Information, ‘Obstruction Of Justice’ Evidence Is Largely Events Already Known)

Cohen later admitted to lying to Congress by saying he stopped working on the Moscow project as of January 2016 when his work actually continued through June 2016. He claimed Trump ordered him to without actually doing so by speaking in “code.” He now says he has found additional documents on his computer that he did not provide before, but which he wants to produce to Congress as part of a bid for leniency when it comes to his jail sentence.

Luke is the author of the new book “Obstruction of Justice: How the Deep State Risked National Security to Protect the Democrats.” Email Luke at luke@dailycallernewsfoundation.org. Follow him on Twitter.