CNN and MSNBC have yet to cover Democratic Pennsylvania state Rep. Brian Sims harassing women who were protesting outside of a Philadelphia-area Planned Parenthood.

Ashley Garecht and three young girls, two of whom are her daughters, were outside the southeastern Pennsylvania Planned Parenthood clinic on Holy Thursday of Easter weekend in April when Sims approached and started harassing them.

“We weren’t trying to talk to anyone coming in or out of the clinic,” Garecht told The Daily Caller News Foundation previously. “In candor, what concerned me was that he was yelling mostly at the girls.”

Following the initial interaction, Sims left and proceeded to come back 10 minutes later with a camera.

“What we’ve got here is a bunch of … pseudo-Christian protesters who’ve been out here shaming young girls for being here,” Sims said in the video. “So, here’s the deal, I’ve got $100 to anybody who will identify these three, and I will donate to Planned Parenthood.”

Sims, who revealed he’s volunteered at PP for the last seven years, went viral for repeating those actions when he accosted an elderly woman last week. The eight-minute video, made and posted by the state lawmaker, depicts Sims confronting the woman and repeatedly mocking her.

“Who’d have thought that an old lady would be outside a Planned Parenthood telling people what is right for their bodies?” he asked. “What you are doing here is disgusting. This is wrong. You have no business being out here.” (RELATED: ‘Old White Lady’ — Pennsylvania State Rep Harasses Elderly Abortion Protester)

A review of MSNBC’s and CNN’s on-air coverage via Grabien, a television video-clipping service, turned up nothing regarding Sims during the month of May. A search for Sims’ name on both of their websites likewise revealed nothing. MSNBC’s most recent result in the search was from Sept. 2013. (RELATED: CNN, MSNBC Ignore Ocasio-Cortez’s Alleged FEC Violation) 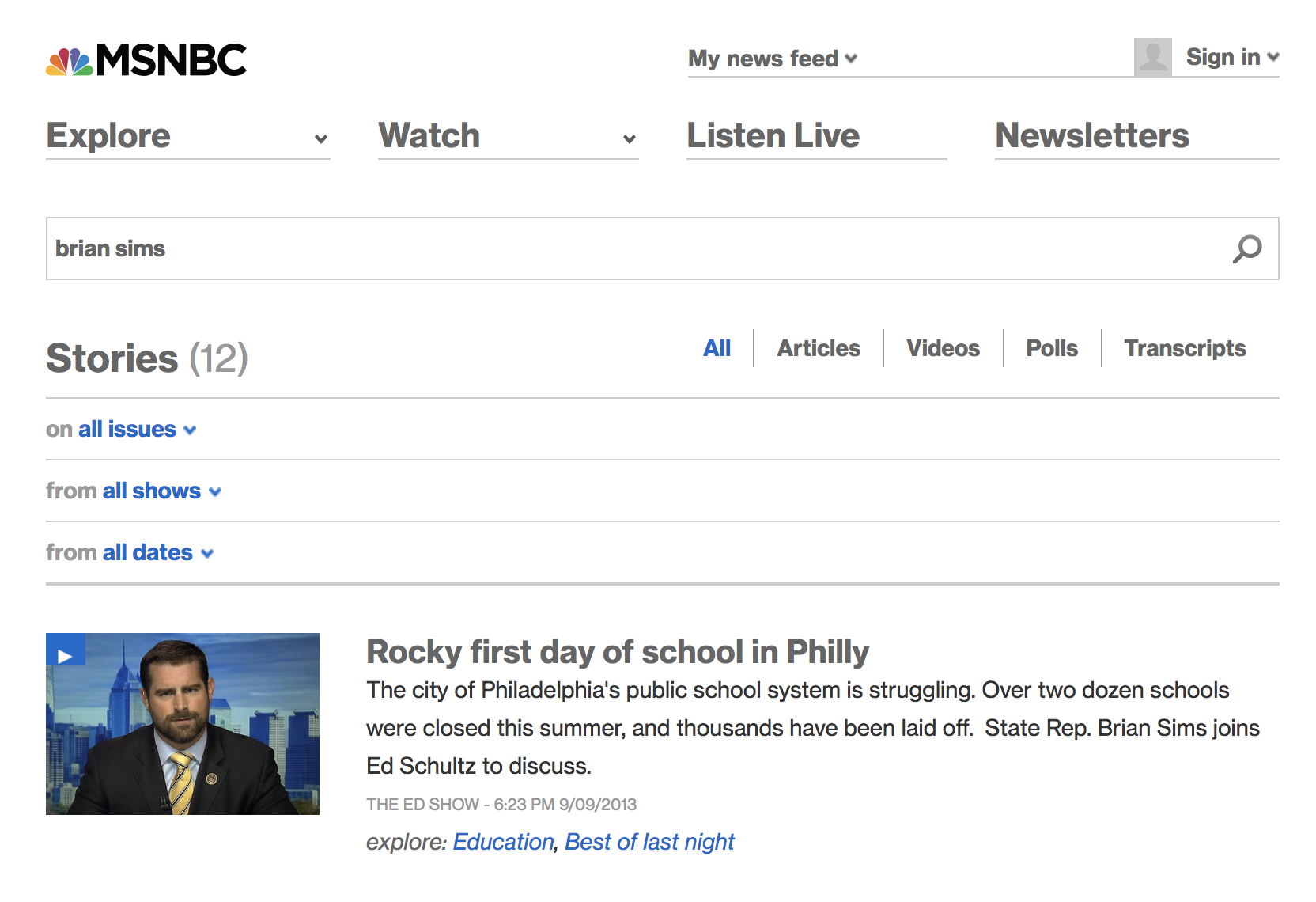 MSNBC search results for “Brian Sims.” The most recent result is from 2013.

A search of CNN’s site turned up articles from as recently as February, but none pertaining to this situation.

Carlson opened his Tuesday show with an interview with Garecht, who claimed that following the incident, she and the girls prayed for Sims.

Following the backlash, Sims issued a follow-up statement, “What I should have shown you in that video was protesters gathered together to pray at, not to silently pray for, people coming out of Planned Parenthood as they intercepted them and harassed them.”

Many ridiculed Sims for not formally apologizing.

Neither CNN or MSNBC has responded to questions for comment.