Tens of thousands of apprehended migrants from the Central American countries driving the border crisis exploit loopholes in the immigration system by making false asylum claims, according to data, experts and surveys.

The loopholes allow “people with suspect asylum claims … to make their way into the interior of the United States and disappear,” one expert told The Daily Caller News Foundation. Data shows only about half of the migrants from those countries who claim asylum actually file a formal application after being let into the U.S.

Asylum is a status reserved for individuals who face persecution in their homeland, but less than 4% of migrants from the Northern Triangle countries of Guatemala, El Salvador and Honduras exclusively said they were fleeing violence, while 72% cited economic conditions as their sole reason for leaving, according to a 2017 survey of deported migrants by the Migration in the Southern Border of Mexico (EMIF).

Just 10% cited both violence and economic conditions as motivating factors.

“The vast majority of current Central American asylum seekers — by their own admission — are economic migrants who do not qualify for asylum, because they are not subject to persecution on the basis of race, religion, nationality, political opinion or membership in a particular social group,” Federation for American Immigration Reform (FAIR) research director Matt O’Brien told The Daily Caller News Foundation. 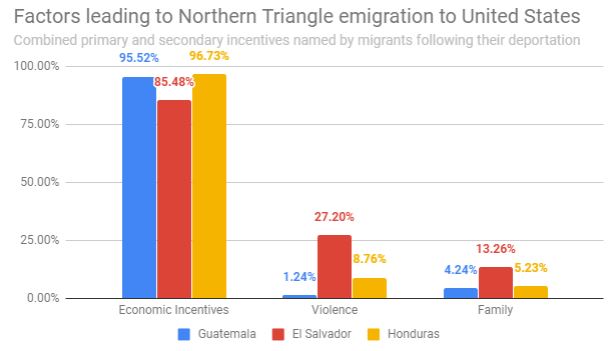 Combined primary and secondary reasons Northern Triangle migrants say they emigrate to the U.S., according to migrants surveyed following their deportation. (Graphic: DCNF/Andrew Kerr; Data source: Survey on Migration in the Southern Border of Mexico)

“These factors combine to make a situation that’s easily exploitable and puts people with real legitimate asylum claims and credible fears of violence at a disadvantage because of the large numbers of bogus asylum claims in the system,” he said.

“When you ask the migrants themselves from these countries, until they’re coached by lawyers, they’re generally pretty honest in that economics are the main motivating factor,” Susses said. “There are exceptions, but for the most part, these people are coming for economic reasons, and that is sympathetic, but it’s not grounds for asylum.”

Most apprehended illegal immigrants from the Northern Triangle region subjected to expedited removal from the country make the indication to apply for asylum. In fiscal year 2018, for example, 61% of the of nearly 104,000 Guatemalans, El Salvadorians and Hondurans facing expedited removal from the U.S. were referred for a “credible fear” test, and 73% of those screened were tested positive by asylum officers, according to a November 2018 Department of Homeland Security (DHS) report.

The “credible fear” test is used to determine whether a migrant will be able to prove in immigration court that he or she faces persecution. But the evaluation is only the first step in the asylum process, and immigration judges are much more stringent than asylum officers who issue the screening.

“Out of every 100 credible fear claims, on average, only about 12 result in a grant of asylum by an asylum judge,” the Department of Justice’s Executive Office for Immigration Review wrote in May.

“Unfortunately, legitimate asylum seekers are being displaced by those lodging frivolous claims — these are frivolous claims — to gain admission into our countries,” Trump said. “My plan expedites relief for legitimate asylum seekers by screening out the meritless claims. If you have a proper claim, you will quickly be admitted. If you don’t, you will promptly be returned home.”

“It’s not that conditions have changed much in these countries, but that they figured out that asylum was a way to get in the door,” Vaughan told The Washington Examiner in June 2018. “Clearly, the lenient policies that enable people to get into the United States just by claiming a fear of return — the ‘credible fear’ standard — is attracting more and more people every year.”

“They know they can make this claim and will be allowed in with no consequences and can disappear into the larger illegal population and may or may not show up for their immigration proceedings,” she continued

Similarly, Republican Sen. Mitt Romney of Utah said in April: “In the last few weeks there’s been a dramatic change, and that is we’re seeing unaccompanied young people as well as families with lots of kids pouring into the border, and they say the magic word, ‘I’m seeking asylum,'” Romney said on NBC’s “Meet The Press.”

“They’re being just turned out into our country — 125,000 of them so far this year,” he continued. “It’s overwhelming our system, we have got to be able to deal with this.”

Migrants with “credible fear” are allowed to stay in the U.S. pending a court date. As of May, the average immigration case takes nearly two years to complete due to a backlog exceeding 830,000 cases, according to the Transactional Records Access Clearinghouse, a nonpartisan database of U.S. federal immigration enforcement operated by Syracuse University. 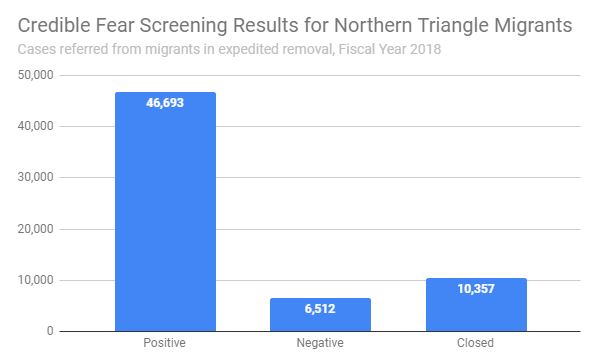 But the law does not require migrants with credible fear to file a formal application for asylum as they remain in the U.S. awaiting their day in court — a loophole nearly half of all such migrants have taken advantage of over the past 10 years, according to the Executive Office for Immigration Review.

“There is a disconnect between the low credible fear interview standard, which determines whether an alien is allowed to stay in the U.S. and pursue an asylum claim, and the complex standards that apply in asylum proceedings,” O’Brien said. “This incongruity consistently allows people with suspect asylum claims into the United States, pending a hearing.”

“As a result, many people with no legitimate claim to asylum or to any other form of relief exploit the system in order to make their way into the interior of the United States and disappear, work illegally, etc.,” O’Brien said.

Immigration judges adjudicated nearly 21,000 cases from Northern Triangle nationals that entered the system under the premise of facing persecution in their homeland in fiscal year 2018, according to DHS.

“Yet in only about 54% of these cases did the alien file an asylum application,” DHS wrote in November 2018. “Furthermore, about 38% … did not appear [in court], and were ordered removed in absentia.” 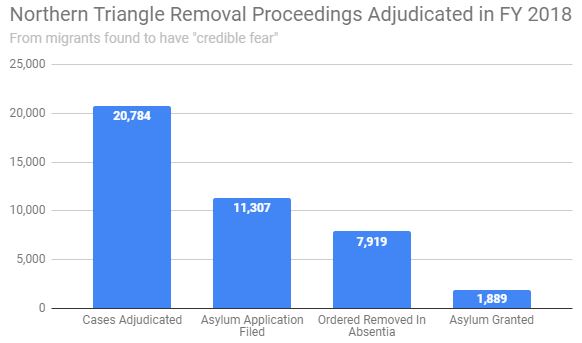 “Given that those aliens asserted a fear of persecution and progressed through credible-fear screening, those aliens presumably would have had the greatest reason to then pursue an asylum application,” DHS wrote. “Even when nationals of Northern Triangle countries who passed through credible-fear screening applied for asylum … immigration judges granted asylum to only 1,889, or 17% of the cases where such aliens filed asylum applications in their removal proceedings,” DHS added.

Migrants with credible fear findings could be placed in “asylum-only” proceedings as soon as August as a result of Trump’s April executive order that, in part, orders DHS to close the loophole.

Migrant family units are almost never deported once let into the U.S.

Ultimately, only 1.4 percent of migrant family members from the Northern Triangle who crossed the border illegally in 2017 have been deported, The Washington Post reported.

Susses said it’s not a coincidence that the share of Northern Triangle migrants arriving with children skyrocketed following the 2015 expansion to the Flores settlement, which required the release of all immigrant minors, accompanied or unaccompanied, after 20 days in custody.

“There’s a reason those times line up perfectly because Central Americans understand that their chances of being released into the country are high due to our laws,” Susses said. “That’s also why half don’t file for asylum after that initial credible fear screening. A lot of them figure, ‘what’s the point?'”

“So even if they’re complying with the process, at any point they can just drop out if they think that their chances of getting a positive asylum finding are going to be low,” he continued.

The prevalence of fake family units has increased substantially in recent years. DHS reported in early May that it had discovered more than 1,000 fraudulent families trying to cross the southern border.

A Guatemalan man was indicted in March for paying $130 to “rent” a child prior to illegally crossing the southern border. DHS investigators said the man “had looked for a child in Guatemala to cross the United States/Mexico international border with as he was told it was easier to get into the United States with a child,” according to the criminal complaint. (RELATED: Illegal Migrant Allegedly Paid $130 To ‘Rent’ A Child To Cross The Border)

The 2017 EMIF survey, which polled migrants whom U.S. authorities deported, found that over 85% of El Salvadorians and over 95% of Guatemalans and Hondurans migrated to the U.S. to pursue better economic conditions as a primary or secondary reason.

El Salvadorians represented the largest share of Northern Triangle migrants who named violence as a factor behind migration into the U.S. in the EMIF survey, but only a little over one-in-four cited it as a reason. Only 9% of Hondurans cited violence as a factor, followed by less than 2% of Guatemalans.

A 2016 International Organization for Migration survey found that 91% of Guatemalans immigrated to the U.S. for economic reasons, while less than 1% said violence, extortion or gang problems was a factor. Another survey by a progressive Jesuit group, the Society of Jesus, found in 2017 that 83% of Hondurans with relatives who left the country said they did so to pursue better economic opportunities, while only 11% cited violence.

The underlying economic motivations driving migration out of the Northern Triangle explains why many from the region chose not to file for asylum in Mexico, which offers a “significantly lower” crime rate than other countries in the region, according to a 2018 study from the National Center for Risk and Economic Analysis of Terrorism Events (CREATE) at the University of Southern California.

“Adult asylum seekers have primarily been driven by economic motivations,” the report stated. “Mexico offers very little economic gain to Northern Triangle migrants, and the increase in income that a migrant could typically expect from migrating to Mexico would not justify the costs of doing so.”

Jason Hopkins contributed to this report