A new Justice Department task force will consider how to keep guns out of the hands of domestic abusers, Attorney General Bill Barr announced Tuesday.

The working group is composed of nine U.S. attorneys, who will look for ways to enforce existing laws and “supplement” state efforts to take guns from people convicted of domestic violence. Abusers with access to guns are five times more likely to kill their partners, Barr noted in a press release announcing the group. 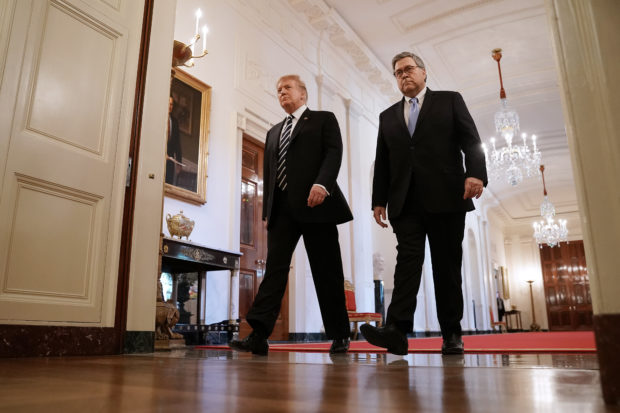 President Donald Trump (L) and Attorney General William Barr arrive together for the presentation of the Public Safety Officer Medals of Valor in the East Room of the White House May 22, 2019 in Washington, DC. Comparable to the military’s Medal of Honor, the Medal of Valor was established in 2000 by President Bill Clinton. (Chip Somodevilla/Getty Images)

“With so many domestic disputes escalating from bruises to bullets, we felt we needed to supplement our state and local partners’ efforts to curb domestic violence with federal prosecutions,” U.S. Attorney Erin Nealy Cox, who chairs the working group, said in the statement. (RELATED: Nonprofit Paid $5,000 In Bail For Man Charged With Domestic Abuse. He Went Home And Allegedly Killed His Wife That Night)

Federal law bans convicted felons and some people convicted on domestic violence charges from owning guns, but the application of the law varies from state to state because of differing definitions of domestic violence. The group is tasked with sharing best practices and legal guidance with states in order to help them prosecute offenders.

The NRA did not immediately respond to a request for comment.

“I have directed this working group to examine this issue and determine the best way to use federal gun prosecutions and other appropriate tools to supplement state, local and tribal efforts to address domestic violence,” Barr said.