Acting Defense Secretary Patrick Shanahan withdrew from the confirmation process after past domestic violence issues within his family surfaced.

President Donald Trump tweeted Tuesday that Shanahan would not go through with the confirmation process to be permanent defense secretary, stating Shanahan wished to “devote more time with his family.” Trump wished him the best and announced that Army Secretary Mark Esper would be the new acting secretary of defense.

Multiple domestic violence incidents have emerged as Shanahan made this decision, although it remains unclear if these allegations influenced his choice. The decision was announced after the Washington Post reported on a violent domestic violent incident in 2011 between Shanahan’s son and his ex-wife.

William, Patrick Shanahan’s son, beat his mother with a baseball bat in November 2011. The assault happened after an argument between the two over William’s alleged relationship with an older woman, according to a police reports cited by WaPo.

William, then 17, beat Kimberley Shanahan, now Kimberley Jordinson, leaving her unconscious in a pool of her own blood, WaPo reported. William fractured Jordinson’s skull and inflicted other injuries that required surgery. He unplugged the phone so that no one could call 911, gave his younger brother rubbing alcohol to “clean her up” and fled, the police report states.

William called his father, who flew to Florida and got his son a hotel room while they met with lawyers. Patrick Shanahan wrote a memo claiming his son was acting in self-defense. He now regrets writing it and says that there is no excuse for violence, according to WaPo. (RELATED: Justin Theroux Accuses His Neighbor Of Domestic Abuse)

“I have never believed Will’s attack on his mother was an act of self-defense or justified,” Patrick Shanahan said according to WaPo. “I don’t believe violence is appropriate ever, and certainly never any justification for attacking someone with a baseball bat.”

William was set to spend 18 months at a Florida Sheriff’s youth ranch plus four years probation, but the sentence was reduced. 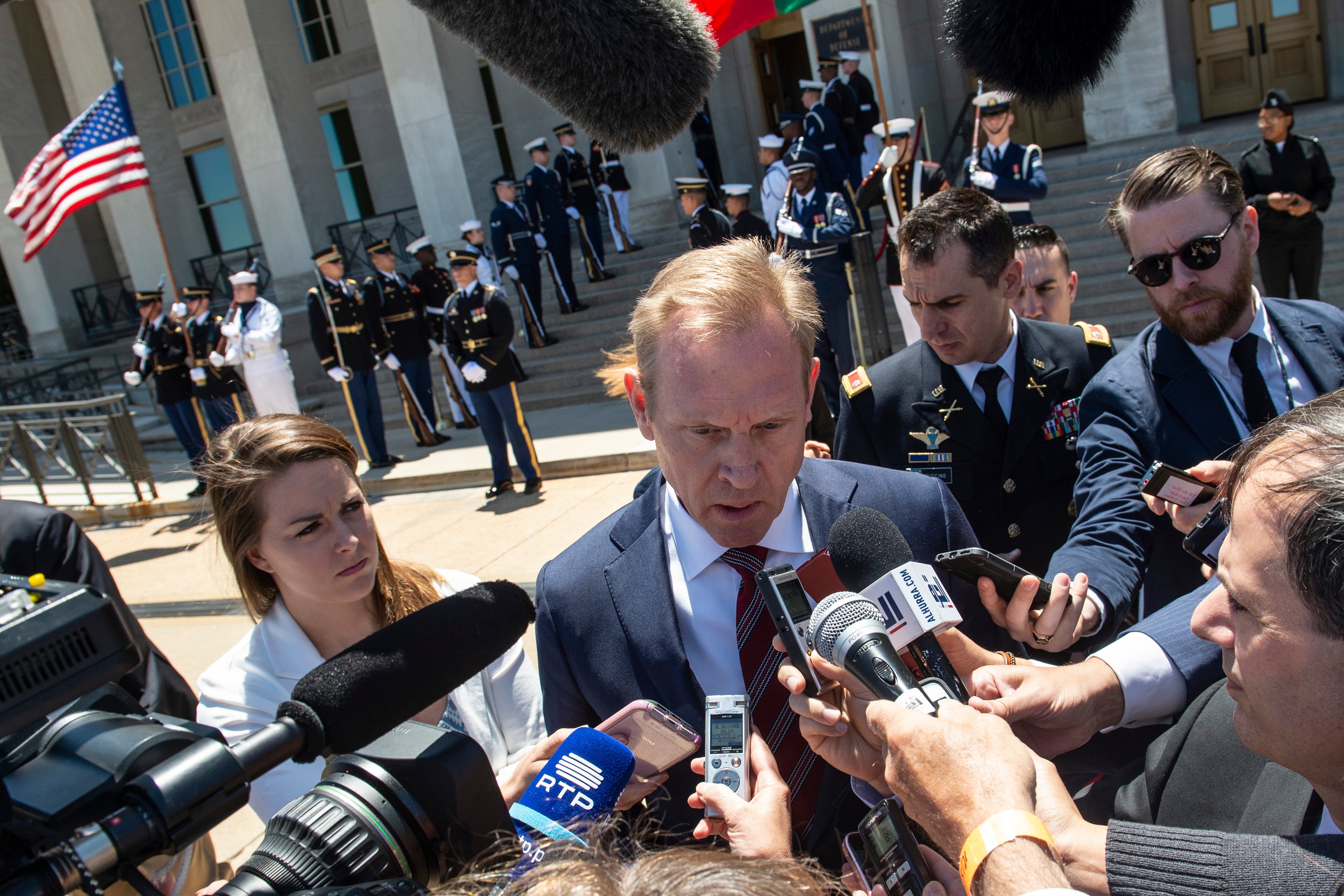 Acting US Secretary of Defense Patrick Shanahan speaks to reporters before his meeting with his Portuguese counterpart Joao Gomes Cravinho at the Pentagon in Washington, DC, on June 14, 2019. (ERIC BARADAT/AFP/Getty Images)

In another incident, Patrick Shanahan was lying in bed after an argument with his wife. She came into the bedroom and punched him in the face and torso, he told WaPo. She then began to throw his clothes out of the window and tried to set them on fire.

Jordinson then tried to hit her husband again and called the cops claiming that he punched her in the stomach. Shanahan denies that this happened, WaPo reported. His wife was arrested and charged with domestic violence. He filed for divorce shortly after and dropped all charges against his now ex-wife.

Jordinson lost custody of their youngest child in 2014 and is estranged from all of her children, WaPo reported. A judge decided that she had “engaged in abusive use of conflict that is seriously detrimental.”

Trump said that he did not tell Patrick Shanahan to withdraw, according to statements made to reporters Tuesday. He also said that he was not aware of the domestic violence incidents until Monday, CNN reported.

“Bad things can happen to good families . . . and this is a tragedy, really,” Shanahan said to WaPo.