Journalists upset with Eoin Lenihan for exposing prominent scribes as antifa cheerleaders redoubled their efforts to discredit him this week, after the Columbia Journalism Review’s hit piece on him was demolished.

The smear campaign is a hallmark of the antifa activists Lenihan wrote about in his study. He found that some of the reporters who cover antifa are not just sympathetic, but actively ally with antifa trolls totally devoted to ruining people’s lives online. “In providing such support, they are discrediting their publications and misinforming their readers,” he wrote in Quillette.

He is now the target of this very kind of reporting. The Columbia Journalism Review published a piece by Jared Holt, a reporter for a liberal activist organization, which was full of misinformation and greatly discredits CJR’s role as an arbiter of good journalism, argued Jonathan Kay, a top editor at Quillette. The Daily Caller detailed the problems with Holt’s piece here, and Quillette also published a response here. Lenihan demanded a retraction in a rebuttal for The Daily Caller. (RELATED: Antifa Leader Relied On Anonymity To Push Radical, Violent Communist Agenda)

Rather than address the problems with Holt’s piece, CJR editor Samuel Thielman and Holt seized on and spread more misinformation flying around on Twitter, this time originating from one of the reporter’s Lenihan named in his report — Patrick Strickland. In a decidedly unprofessional tweet, Thielman poked fun of Lenihan for supposedly lying about his connections to the Tony Blair Faith Foundation, which morphed into the Tony Blair Institute for Global Change in December 2016. Strickland had obtained an email from the Institute saying Lenihan was never contracted.

“Eoin if you stand outside The Institute for Global Change screaming ‘I’m a vegan socialist who thinks cows should get abortions’ in a sandwich board of your own design you are not technically ‘under contract,'” Thielman tweeted, along with Strickland’s tweet. Holt also retweeted Strickland, asserting it’s further evidence that Lenihan is a bogus right-wing troll. 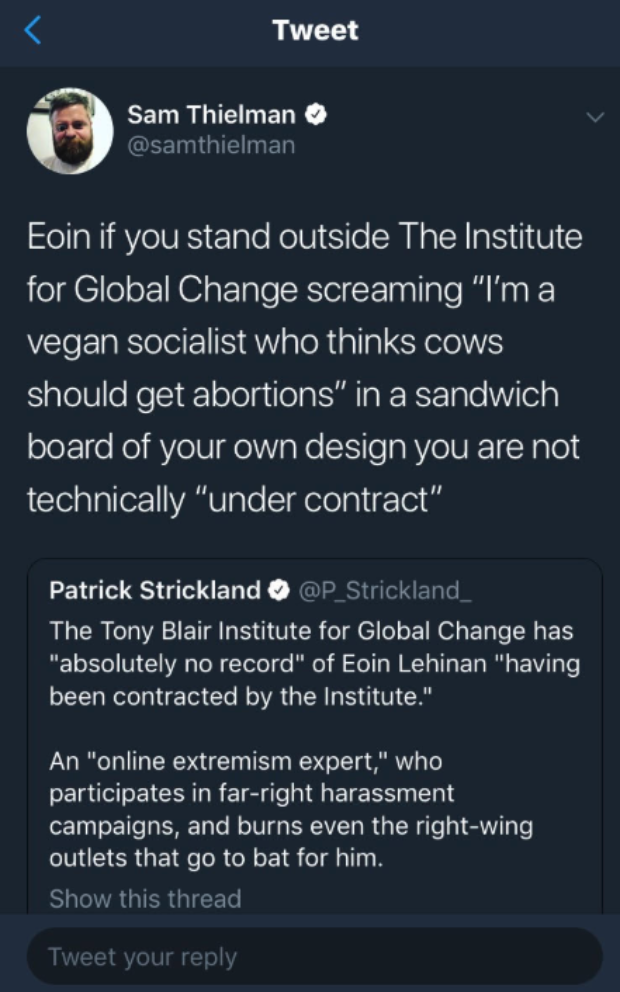 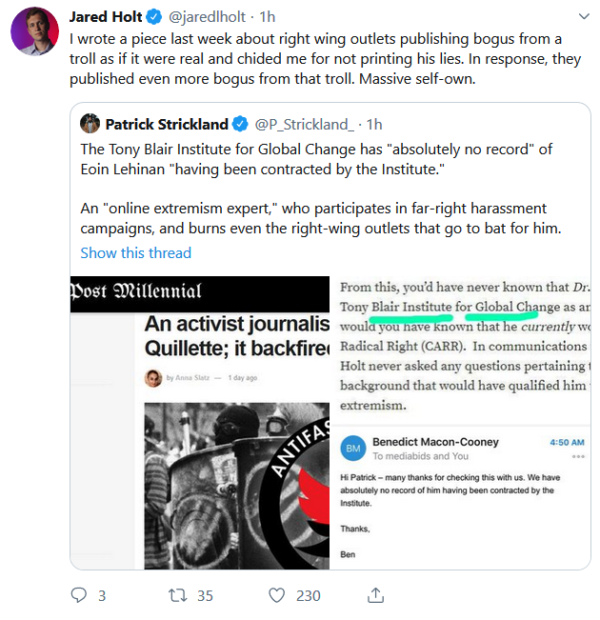 In fact, Lenihan was interviewed and selected to work with the Foundation on a set of curriculum documents for educators aimed at helping them intervene with people at risk of drifting into far-right extremism. The project fell through, however, apparently because it lost funding and because the organization went through a restructuring process, so Lenihan’s contract never materialized.

While he wasn’t given a formal offer by the Blair Institute, the clear insinuation from Strickland’s tweet — that Blair was never interested in his expertise — is false. Screenshots of emails between Lenihan and various members of the then-Blair Faith Foundation make it quite clear they were interested in working with him on the project, and follow on messages some time later show Lenihan had an ongoing positive relationship with the Institute. (RELATED: If The Columbia Journalism Review Has Any Integrity, They Will Retract Their Article Smearing Me)

“I am very happy to be able to tell you that we are interested in working with you to develop a set of resources,” the person who was then head of education and training at the Blair Faith Foundation told Lenihan in a Nov. 25, 2016 email, adding: “We are going to progress this, but I need to clear the decks a bit in order to ensure that I’m able to give you a really clear brief at the start of the process. My apologies for the continued delay.” 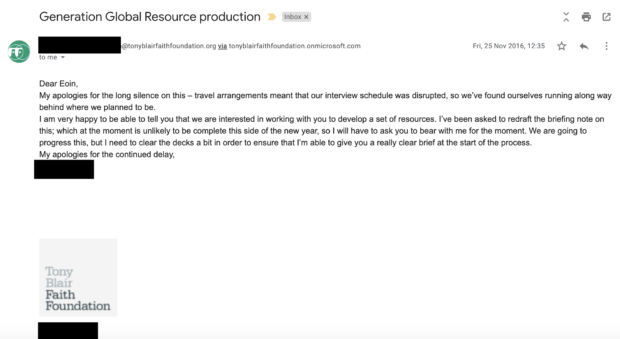 That December the Tony Blair Faith Foundation became the Tony Blair Institute for Global Change, and according to Lenihan the project never materialized. But a follow up email the Institute was still interested in working with Lenihan some months later, in March 2017. 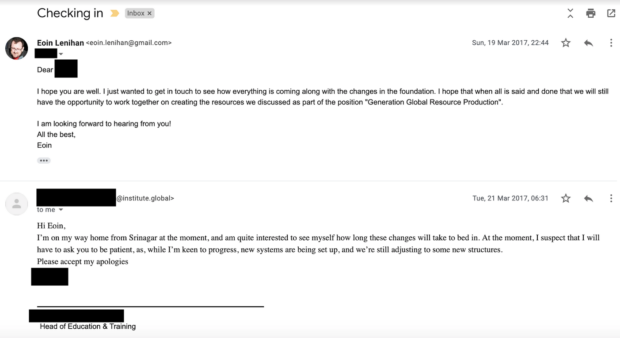 A spokesman for the Blair Institute confirmed to the Caller that the Faith Foundation talked to Lenihan about the position, but in the end did not formally contract him. He did not respond to a follow up inquiry as to whether they offered him the position informally, and then revoked it at some point following the restructuring process.

Nothing here indicates Lenihan lied about anything. He told Holt he was hired for the role (he was informally), and volunteered to the Caller the additional information that the project never materialized. Holt did not ask Lenihan to elaborate, and in fact absolutely nothing he told Holt about his professional career made it into the CJR piece. (RELATED: Columbia Journalism Review Endorses One-Sided Journalism In Trans Athlete Debate)

Lenihan also provided the Caller with documents confirming he was working on a platform for developing curriculum documents and webinars with the Center for Analysis of the Radical Right. “We very much look forward to working with you on this,” a CARR employee wrote to Lenihan in an email dated June 5, 2019, about the logistics of the ongoing work. CARR Director Matthew Feldman was copied on the email. 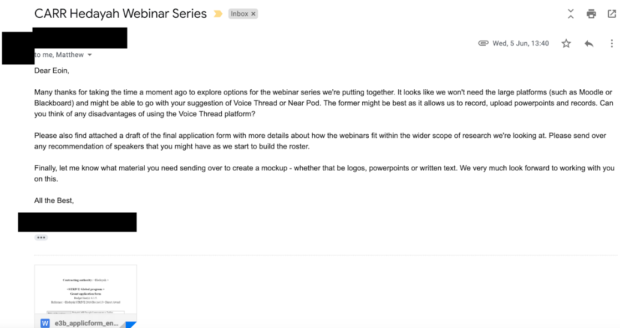 Lenihan also participated in a panel discussion on the dangers of left-wing and right-wing extremism at the Konrad Adenauer Foundation in Berlin last October. He talked with researchers and government officials about the lack of research into far left extremism in this discussion, and he told the Caller that’s what prompted his most recent research into antifa.

Additionally, Lenihan was scheduled to present his antifa findings at a terrorism and social media conference this summer, and was invited to talk to a youth group about right-wing extremism at the Dachau Concentration Camp in August. He was uninvited from the terrorism conference a few days ago, after they learned of his study, and his name scrubbed from the speaker’s list. He was told in an email the conference team had not been aware of his parody account, or some of his “recent publications.”

Not a hint of any of these connections made it into Holt’s CJR piece. Holt also completely omitted his extensive educational background. Lenihan holds a BA in history and archaeology from the National University of Ireland, Galway, where he also obtained a teaching diploma, and an MA in landscape archaeology. He also holds a PhD in Pedagogy from the University of Augsburg, which he obtained last summer.

Another false claim flying around Twitter is that Lenihan lied about the status of his study with the journal Social Networks. Talia Lavin, who was fired as a fact checker at The New Yorker after she falsely accused an immigration official of being a Nazi, submitted a bogus study to the journal. She then posted a screenshot of its status and claimed “anyone can submit an academic paper to a journal, kids!” Lenihan’s study, however, has advanced well beyond the initial submission phase. (RELATED: NYU Cancels Former Media Matters Writer’s Class After Only Two Students Sign Up)

His study is “under review,” which means the journal has assigned an expert to review his study. A chart below shows the process the journal outlines on its website for reviewing submitted pieces. 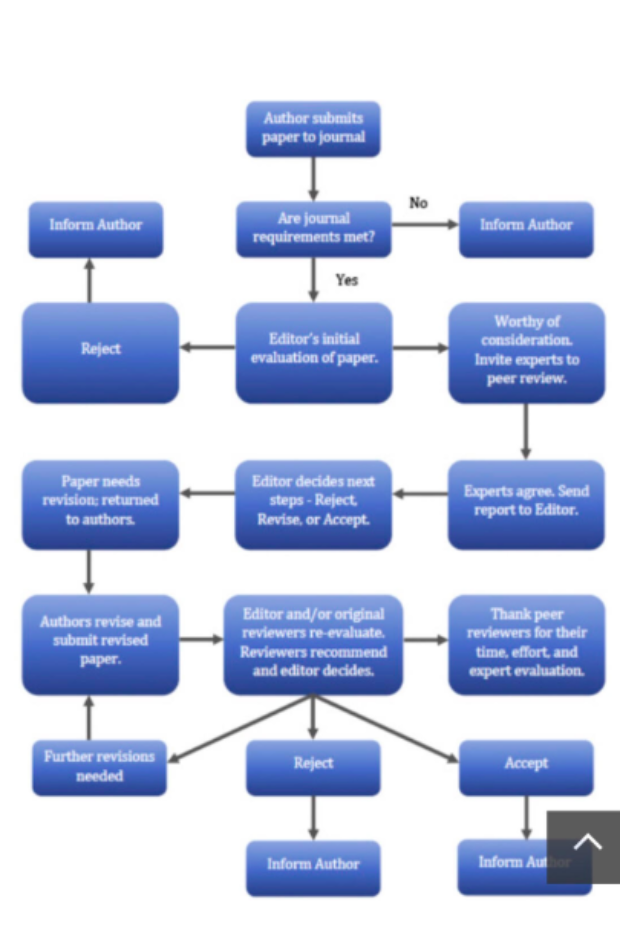 Finally, freelance writer Elizabeth King has accused Lenihan of lying about why he isn’t making all of his data publicly available, because she reached out to the journal and discovered the journal does not have a policy precluding authors from making their work public while it’s under review. While Lenihan told the Caller he wrongly assumed that rule was in place, he said it doesn’t change his decision not to publish. If the journal rejects his study, he said he may submit it elsewhere for review, and is concerned about violating the policies of that potential journal, since it’s common practice to demand exclusive rights to studies under review for publication.

The concerted campaign to discredit Lenihan from journalists and antifa actifists, without regard for the truth about his professional record, is arguably a good instance of the sort of problem described in his research.