Republican Texas Rep. Dan Crenshaw called out former Secretary of State Hillary Clinton Saturday for blaming the Trump administration for the border crisis and then exploiting it for Democratic fundraising.

Clinton tweeted: “Two-year-olds in detention. Children forced to take care of other children. Not enough food or water. Demand accountability from your Republican representatives for allowing this administration to cage children and keep them in unconscionable conditions.”

Crenshaw responded by saying Clinton was “gaslighting” Americans by suggesting she and other Democrats have no responsibility for the problems at the border. “So tell us, if you were President, how would you manage hundreds of thousands of people illegally crossing our border and dragging children with them?” he asked. (RELATED: Democratic Mayor: ‘We Are Sick And Tired’ Of Government Inaction On Illegal Immigration)

Republican Representative-elect Dan Crenshaw talks with reporters as he arrives for a class photo with incoming newly elected members of the U.S. House of Representatives on Capitol Hill in Washington, U.S., Nov. 14, 2018. REUTERS/Carlos Barria

You know Dems have refused to support funding for resources at the border & have offered no solutions.

So tell us, if you were President, how would you manage hundreds of thousands of people illegally crossing our border and dragging children with them? https://t.co/uzNWCtP83b

Crenshaw also objected to Clinton telling her supporters to “chip in” to refugee groups. “There are amazing groups at the border and beyond doing critical work to defend the rights of immigrant and refugee children. If you can, please chip in to support a few of them today.”

The former Navy SEAL castigated Clinton for “blatantly lying” and then appealing for financial support for a “Democratic Party fundraising platform” while suggesting it’s all about helping the refugee children. (RELATED: Hillary Clinton: ‘There Is No National Emergency At Our Border’)

After blatantly lying, you’re also fundraising for “rights of immigrants” using ActBlue, the Democratic Party fundraising platform, so that donor data is collected for the Democrats.

United States Customs and Border Protection (CBP) agents continue to be taxed by the influx of illegal immigrants crossing the border. Former Department of Homeland Security Secretary Kirstjen Nielsen described how criminal gangs are “recycling” children by using the same kids to bring phony “families” across the border. 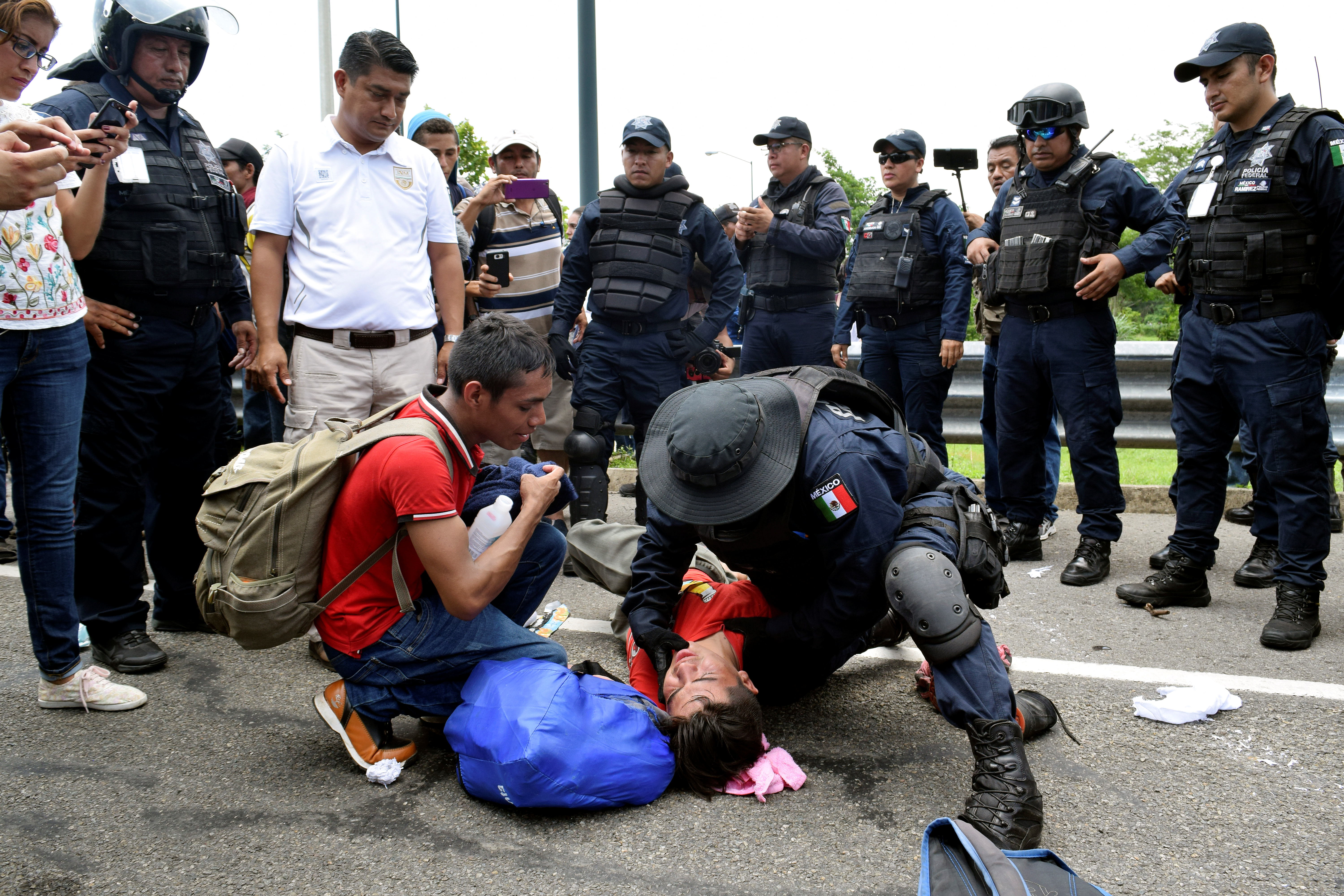 A federal police officer checks the head of an injured migrant during a joint operation by the Mexican government to stop a caravan of Central American migrants on their way to the U.S., at Metapa de Dominguez, in Chiapas state, Mexico June 5, 2019. REUTERS/Jose Torres

Before he was appointed acting DHS secretary, then-U.S. CBP Commissioner Kevin McAleenan described the reality of the border as having reached a “breaking point” as he inspected the El Paso, Texas crossing, according to the El Paso Times.

DHS is projecting that 2019 will be the worst year for illegal immigration in a decade, if current trends continue. President Donald Trump is hoping Mexico can alleviate some of that pressure by better policing its own border. He reached a deal with Mexico this month that could achieve that objective — but only after flagging a 5% tariff on all Mexican exports to the U.S.