He pointed to a documentary about him called “Street Fight” and his football career to bolster his case.

“Anybody who knows me, what kind of a fighter I am, not only in the Senate — everything from fighting to stop Jeff Sessions with being attorney general to even in the [Brett] Kavanaugh hearings,” he boasted to reporters following the first Democratic primary debate. “But there is an Oscar-nominated documentary about my fighting in Newark called “Street Fight,” so I want to let you know this former Stanford tight end can bring it and can fight a good fight.” (RELATED: Julian Castro Wows In First Debate, As Dems Fight To Out Liberal Each Other)

Booker was questioned repeatedly about whether he’ll be able to handle Trump, who has proven formidable on the debate stage and succeeded in belittling, dismissing, and laughing off many of the other candidates on the campaign trail in 2016. Democratic strategists have expressed concern about whether anyone in the current field of candidates will be able to take him on. 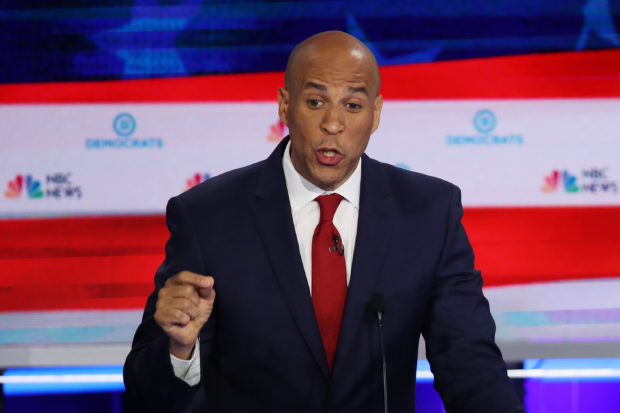 Booker said he would have no problem doing it, and that he could beat Trump by calling on the country to unite, instead of getting ugly.

“I’m uniquely qualified to get rid of Donald Trump, because I refuse to fight this election on his turf, using his tactics and his demeaning, degrading way of going about this,” he said. “I’ve beat bullies before, not by taking on the bully’s tactics, but by calling others to show who we are.” (RELATED: Booker Brags About People Being Shot And Killed In His Neighborhood)

Another reporter asked him to respond to Trump’s tweet during the debate saying the whole thing was “boring.”

“He wants to make it all about him and his outrageous comments,” Booker said. “No, I’m making this about the American people. This is not a referendum just about Donald Trump, it’s a referendum on who we are and who we’re going to be.”

“Who cares what Donald Trump has to say?” he added. “We had our say tonight and I’m proud.”

Booker has trailed in the polls, struggling to get more than 1 or 2 percent of support, but said Wednesday he thinks the debate will prove to be a breakout moment for his campaign. He’ll likely be relegated to the background Thursday, when ten more candidates take the stage for round two, including leading candidates former Vice President Joe Biden and Independent Sen. Bernie Sanders.