MIAMI — Ten Democratic candidates wrestled over a slew of drastic policy positions, often vying to out-left each other in the first of two debates hosted by NBC News at the Adrienne Arsht Center for the Performing Arts in Miami.

Former Housing and Urban Development Secretary Julian Castro managed to outshine Democratic Sen. Elizabeth Warren, and in a particularly compelling moment called on the rest of the candidates to endorse his plan to decriminalize border crossings. Warren made headlines for pitching the plan this week, but it’s one Castro has been pushing since April. He also beat Warren to calling for impeachment proceedings against President Trump earlier this year, but was overshadowed by her relative prominence in the field.

“The fact that the field is following him is great, that’s victory,” a spokeswoman for the Castro campaign told the Daily Caller. “That’s what we want.” She said being first to the issues shows he is willing to be politically genuine. “This is somebody who is bold, who’s not really political,” she said. (RELATED: Castro Makes Closing Statements In Spanish)

Republicans cast Castro’s plan, backed by Warren, Democratic Sen. Cory Booker and Washington Gov. Jay Inslee, as extreme. Republican Rep. Dan Crenshaw said Wednesday their position is proof the Democratic Party is the party of open borders. When former Democratic Texas Rep. Beto O’Rourke expressed hesitations about the plan interfering with efforts to detain criminals at the border, Castro jumped in and chided him. “If you did your homework on this issue, you would know that we should repeal this section,” Castro said. 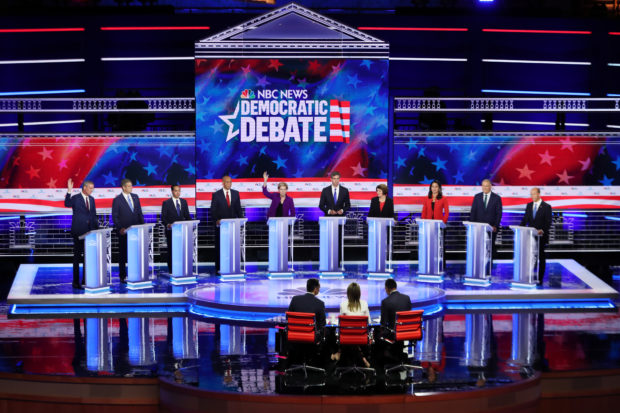 It was one of several striking moments in the debate on a range of issues, in which one of the candidates jumped in to establish him or herself as even further to the left of the group on a given position that is already decidedly liberal.

The discussion of the House-passed Equality Act was another one. Democrats in the House voted unanimously in support of the bill, which would enact sweeping changes to the Civil Rights Act, making gender identity a protected class and adding a host of new spaces in which it is illegal to discriminate against any protected class. The bill would require schools to allow transgender athletes to compete with girls and use their locker rooms and bathrooms, for example.

The top Democratic candidates have endorsed the bill, and most of those on stage Wednesday have expressed support for some or all of its tenets. But Booker jumped in at one point and proclaimed that an overhaul of civil rights law is “not enough,” because the country needs to do more about violence against the transgender community. “We do not talk enough about trans Americans, especially African-American trans Americans, and the incredibly high rates of murder right now,” he said. “We don’t talk enough about how many children, about 30 percent of LGBTQ kids, who do not go to school because of fear.”

Castro again pushed the limits of a consensus, boasting on abortion: “I don’t believe only in reproductive freedom, I believe in reproductive justice.” He said it’s important that every American have access to abortion, including transgender women.

While a majority of Americans support Roe v. Wade, polling on abortion has long shown big majorities of the country do not support unlimited access to abortion and support restricting it to the first and second trimesters. (RELATED: Castro Claims Men Can Have Babies During Democratic Debate)

Inslee also vied for the most pro-abortion title, boasting his healthcare plan would force abortion coverage and claiming he is the only one on the stage to have passed a law enabling more access to abortion for women. That prompted Democratic Sen. Amy Klobuchar to chime in pointedly, “I just want to say, there’s three women up here that have fought pretty hard for a woman’s right to choose.” (RELATED: Inslee Brags About Forcing Abortion Coverage) 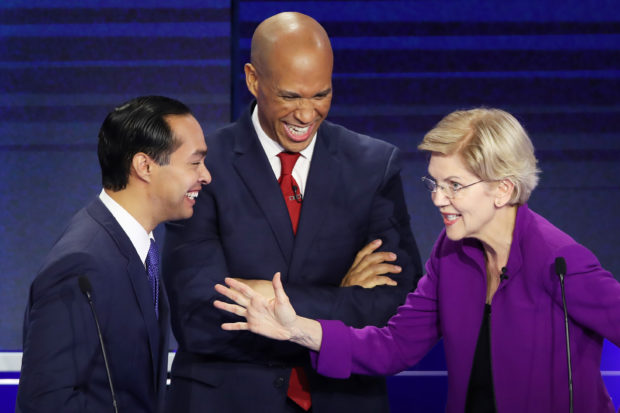 On health care more broadly, all of the candidates staked out a position in favor of a universal health care system, and a couple of them went as far as to say they would abolish private health insurance. Former Maryland Democratic Rep. John Delaney was a moderating voice here. He said based on what he’s heard about Medicare pricing, a “Medicare for All” plan would be devastating for hospitals. “We are basically supporting a bill that would have every hospital close,” he said. But his plan, too, would mandate universal health insurance.

On climate, the candidates mapped out drastic and far left positions. Inslee has built his campaign on combating climate change. His $9 trillion proposal would mandate net-zero carbon emissions for the entire U.S. economy by 2045, which would include transitioning completely to electric cars, carbon zero electricity, and zero carbon pollution in all new commercial and residential buildings — a transformation of the U.S. economy.

Inslee said he would get rid of the Senate filibuster as president, in order to jam his plan through Congress if he has to. It’s an emergency measure, he said, and declared it would “save” Miami from going underwater. He’s not the only candidate delivering drastic climate proposals, just the most detailed. Four of the other candidates — Booker, Warren, Castro and O’Rourke — named climate change as the greatest threat in the final question of the debate.

Nevertheless, the Democratic Party doesn’t seem concerned about alienating moderates, at least not at this stage. A spokesman for Ohio Democratic Rep. Tim Ryan told the Caller he believes the party platform will hold broad appeal. Democratic National Committee chairman Tom Perez scoffed at the notion that the party might be veering too far left to win the general election.

He brought up abortion as a case in point, saying 75 percent of Americans support Roe v. Wade, and asserting it’s the Republican Party that is in the minority. “The Democratic Party platform speaks to a range of Americans,” he told the Caller.