The Trump administration and Senate Republicans are urging House Democrats to take up the Senate’s supplemental border bill that provides emergency funding for humanitarian needs without additional conditions on immigration officials.

The House and Senate are currently clashing over their own versions of the bill addressing the crisis on the border and are attempting to reach a compromise before the July 4 recess. Both bills provide funding for Customs and Border Protection (CBP), Immigration and Customs Enforcement (ICE), Health and Human Services (HHS) and other agencies.

However, the House Democrats’ version of the bill contains additional riders on immigration policy that Republicans say are nonstarters.

“The House Democrat bill is an unserious attempt to save face after pretending the border crisis didn’t exist for months,” a senior White House administration official told the Daily Caller. “It has impractical riders that would delay aid. Stop the pointless obstruction and pass the bipartisan Senate bill.”

The House bill, passed late Tuesday night, included stricter guidelines for immigration officials in an attempt to appease the left-wing members of the Democratic Party. The House bill would establish health standards for migrant children, would allow lawmakers to inspect detention facilities without any notice and would require DHS to provide translation services to migrants held in shelters. (RELATED: What’s The Difference Between The House And Senate Border Bills?) 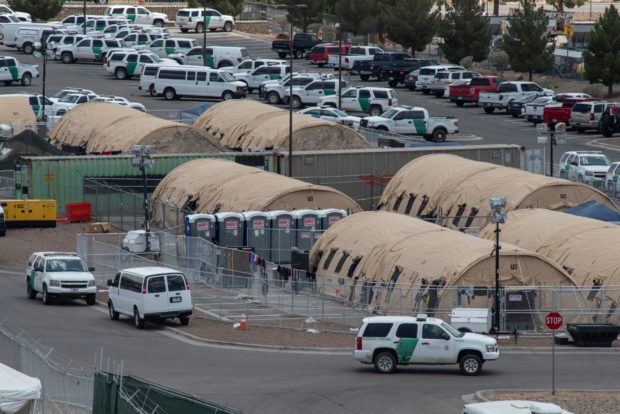 Tents are seen at a temporary holding facility for migrants that has been in use since early May, to hold the record numbers of migrants entering the El Paso border sector, in El Paso, Texas on May 31, 2019. PAUL RATJE/AFP/Getty Images

The Senate rejected that version of the bill and instead passed its own on Wednesday that contains the emergency funding without the so-called “poison pills,” as Senate Appropriations Committee Chairman Richard Shelby called them. The Senate version also provides additional funding for the Department of Defense (DOD) and provides more flexibility for immigration officials when dealing with inspections by lawmakers.

White House press secretary Sarah Sanders released a statement on Thursday confirming that the administration would not support the Democratic border bill and urged House Democrats to take up the Senate version.

“The only ones delaying help for the children are the Democrats. They falsely claimed all year that the situation at the border was a ‘manufactured crisis’ and denied desperately needed humanitarian funding for months. They have refused to work with Republicans to end incentives for the human trafficking that takes advantage of women and children, or to end the surge of cartels bringing in illegal drugs. The Administration sent its request for emergency funding 8 weeks ago, but there was no action. We have already negotiated a broadly supported bipartisan funding bill. It is time for House Democrats to pass the Senate bill and stop delaying funding to deal with this very real humanitarian crisis.”

Republican Louisiana Senator Bill Cassidy touted the Senate’s success in a statement Wednesday, asserting, “The Senate just showed that we can pass bipartisan legislation to address the crisis on our southern border. Now it’s time for House Democrats to join us and show they would rather have a solution than a campaign issue.”

A senior House GOP aide reiterated concerns about the House’s version to the Caller and accused Pelosi of merely trying to appeal the “resistance” wing of her party.

“By every metric, the House bill fails to confront the overwhelming crisis occurring at the border,” the aide said. “Not only does it put a weak bandaid on the problem without addressing any of the underlying issues, it even undercuts law enforcement leaving the door open for the problem to become worse. This is Pelosi sacrificing governing on the altar of appeasing the resistance.”