Democrats largely ignored footage of gay Asian journalist Andy Ngo getting assaulted by antifa extremists over the weekend, while liberal journalists and activists downplayed the violence and blamed the victim.

Reporters and Democrats who have previously praised antifa, ranging from former Vice President Joe Biden to CNN host Chris Cuomo, were silent on the attack, which put Ngo in the hospital with a brain bleed. Gay rights groups were silent. Democrats as a whole were silent, with the exception of Andrew Yang and Rep. Eric Swalwell, both long shot candidates for president.

Ngo was filming a clash between the Portland, Oregon arm of antifa and right-wing extremists, when antifa members threw milkshakes in his face (possibly laced with a cement mixture) and hit him over the head repeatedly. (RELATED: ‘When I thought It Was Over, I Was Wrong’: Andy Ngo Describes Brutal Antifa Attack)

Many liberal journalists and activists not only declined to condemn the assault, but also cast Ngo as a provocateur who “finally got his wish” for violence. These include Charlotte Clymer, a communications staffer for the largest gay rights group in the country, Politico reporter Alheli Picazo and New York Times writer Charlie Warzel.

Let’s go through some of the responses, starting with the Democratic Party.

Biden has not commented on the attack, and a spokeswoman for his campaign did not respond to multiple requests for comment. He referred to antifa as “a courageous group of Americans” in a video announcing his presidential bid.

The Democratic National Committee did not respond to multiple requests for comment.

Minnesota Attorney General and former DNC deputy chair Keith Ellison, who posed with an antifa “handbook” and blasted the photo out to his Twitter followers, did not respond to a request for comment. Ellison deleted the tweet in June.

Yang expressed support for Ngo, but stopped short of condemning or even naming antifa in his response. “I hope [Ngo] is okay,” he tweeted.” Journalists should be safe to report on a protest without being targeted.”

Swalwell also declined to name antifa in his tweet on the attack: “I don’t agree with much of what [Ngo] ever says. But that’s not the point. He should not be harmed for his views and his attackers should be prosecuted. *And Congress should pass my Journalist Protection Act, which makes it a federal crime to assault or batter a journalist.”

Many journalists and activists also declined to address the attack, with the notable exceptions of CNN’s Brian Stelter and Jake Tapper, who condemned the violence.

CNN’s Chris Cuomo has compared antifa to the D-Day soldiers and defended violence from the group.

“People who show up to fight against bigots are not to be judged the same as bigots, even if they do resort to the same petty violence,” he said in August 2018, and “All punches are not equal morally.”

CNN’s Don Lemon has also downplayed antifa violence and defended the group. “No organization is perfect,” he said in August 2018. “There was some violence. No one condones violence, but there were different reasons for antifa and for these neo-Nazis to be there.” He was referring to the violent clashes in Charlottesville, Va., between antifa and white supremacists.

Cuomo and Lemon have not spoken up since the attack on Ngo.

None of the gay rights groups condemning violence against the community broadly and celebrating Pride Month have expressed support for Ngo or condemned the attack.

Clymer, a communications staffer for Human Rights Campaign, suggested Ngo wanted and deserved the attack. “Andy Ngo intentionally provokes people on the left to drive his content,” Clymer tweeted. “Being attacked today on video taken by an actual journalist (because Ngo is definitely not) is the greatest thing that could have happened to his career.”

Politico reporter Alheli Picazo tweeted: “Andy Ngo is someone who antagonizes those he knows will react in a disproportionate way and this exact outcome was inevitable. Everyone knew it.” She added: “If/when shit like this is used to paint an entire movement or side as wholly violent, be sure to pat the aggressors here on the back.”

Bernard Media co-founder Nathan Bernard said Ngo “finally got his wish” by being attacked. “After relentlessly baiting and harassing antifa, far-right provocateur Andy Ngo finally got his wish of being milkshaked,” he tweeted. “Far-right simpletons like Tim Pool will milk this ‘victim’ story for the next week at least.”

New York Times writer Charlie Warzel said Ngo “should know” not to provoke antifa. “Thread from a great journalist who routinely embeds w/ hate groups,” he tweeted. “This doesn’t discount that the situation is fucked and that violence should be unacceptable. But there are also serious risks involved with putting yourself in volatile situations. Any journalist should know that.”

Columnist CJ Werleman implied Ngo deserved it. “Andy Ngo, who is one of the leading amplifiers of Islamophobia in US, and who was participated in white supremacist instigated violence, was beaten up by Antifa in Portland today,” he tweeted.

Talia Lavin, who resigned as a fact checker for the New Yorker last year after falsely accusing an immigration enforcement official of being a white supremacist, retweeted a photo of Ngo’s backpack with the caption, “when an antifa bird poos on your backpack.” She later deleted the tweet. (RELATED: NYU Cancels Former Media Matters Writer’s Class After Only Two Students Sign Up) 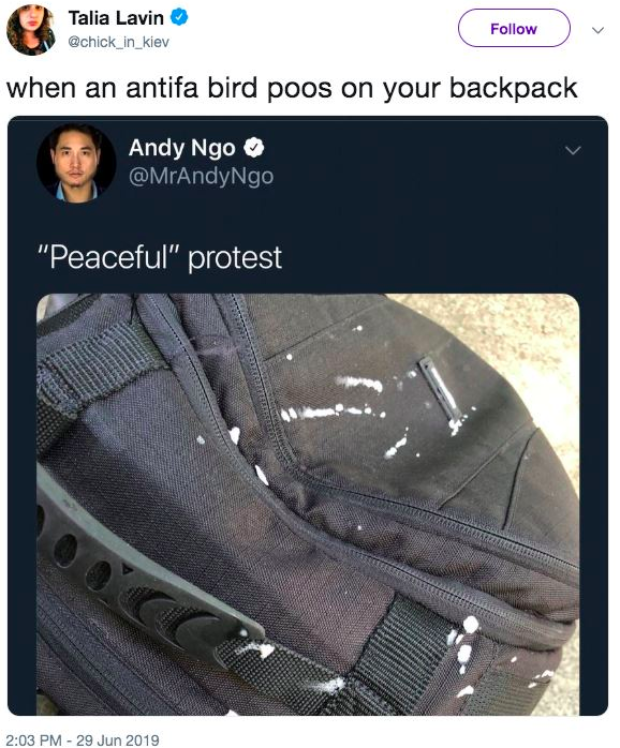 Senior HuffPo reporter Christopher Mathias also retweeted the photo, with the caption: “Milkshakes have this special power of revealing how fascists and their enablers are giant fucking snowflakes.” He later deleted the tweet. 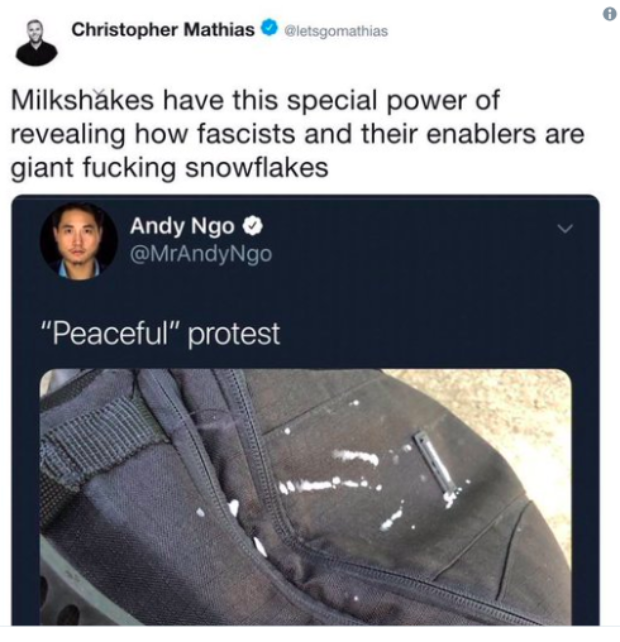 Media Matters editor Parker Molloy, a transgender activist, also made fun of Ngo. “Looks like you were attacked by a small family of pigeons,” she tweeted, along with the backpack photo. 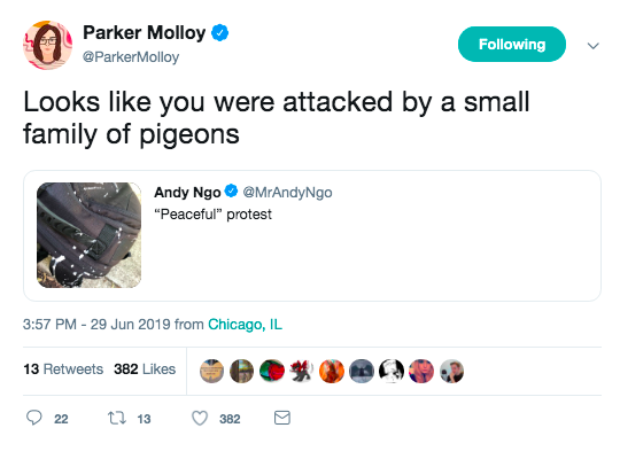 Brooke Binkowski, former managing editor of Snopes, implied Ngo exaggerated the extent of his injuries. “Wow you have really recovered miraculously from that traumatic brain injury!” she tweeted. “Congrats Andy!”

Blogger Sarah Gailey called for violence in a series of now-deleted tweets following the attack. “If we can’t throw milkshakes I guess we’ll just have to go back to bricks,” she said, along with a shrug symbol. “this whole milkshake thing reminds me of that tumblr post about how anti-union people seem to have forgotten the previous alternative to unions, which is that workers drag the factory owner out of his house in the night and beat him to death in front of his family.” 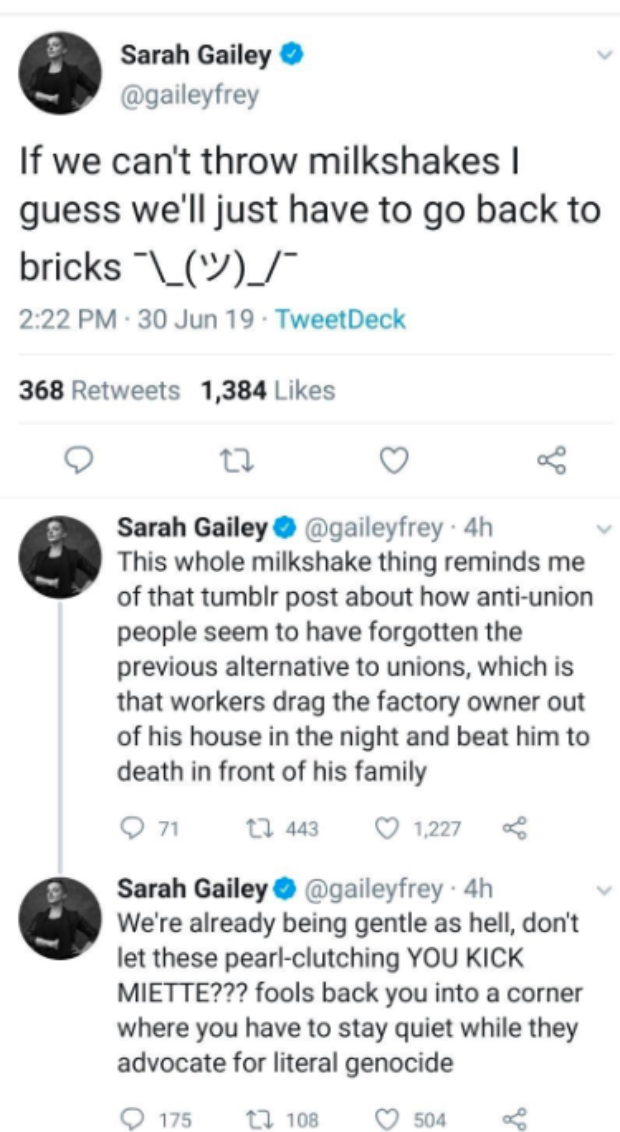 And in a third tweet: “We’re already being gentle as hell, don’t let these pearl-clutching YOU KICK MIETTE??? fools back you into a corner where you have to stay quiet while they advocate for literal genocide.”

Slate writer Aymann Ismail said Ngo is “guilty of worse” than the people who assaulted him, because of his political views.

“I’d argue what the fear mongering he’s done against Muslims plus the work he’s done to discredit hate crimes, helped create an atmosphere of violence that vulnerable people all have to live through just for being who they are,” he tweeted. “This is bad, but he’s guilty of worse.”