Senate Minority Leader Chuck Schumer called on “Acting CBP Commissioner Morgan” to be fired from his position, but Mark Morgan is not yet leading the agency.

“Schumer Calls For Acting CBP Commissioner Morgan And Other Top Leadership At Agency To Be Fired And For New, Untainted Team To Be Brought In To Begin Reining In Toxic Culture At Border Patrol Agency,” read a headline from a Schumer press release sent Wednesday.

However, Morgan is not the acting commissioner of Customs and Border Protection, nor is he leading the U.S. Border Patrol. Morgan is still the acting director of Immigration and Customs Enforcement (ICE), an agency he has been in charge of since May.

The apparent confusion may stem from announcements in June that CBP Acting Commissioner John Sanders was resigning and Morgan would be leaving ICE to take his place. However, the leadership transition has not officially taken place. An ICE spokesperson confirmed to the Daily Caller News Foundation that Morgan is still leading their agency and would not officially take over the reins of CBP until Sunday.

“Internal investigations aren’t enough because the leadership at CBP, particularly Acting Commissioner Mark Morgan, are too callous about the way in which children and their families are treated, which is why we need untainted professionals to be brought in from outside the CBP structure immediately,” Schumer said in a statement, misstating Morgan’s official government position. 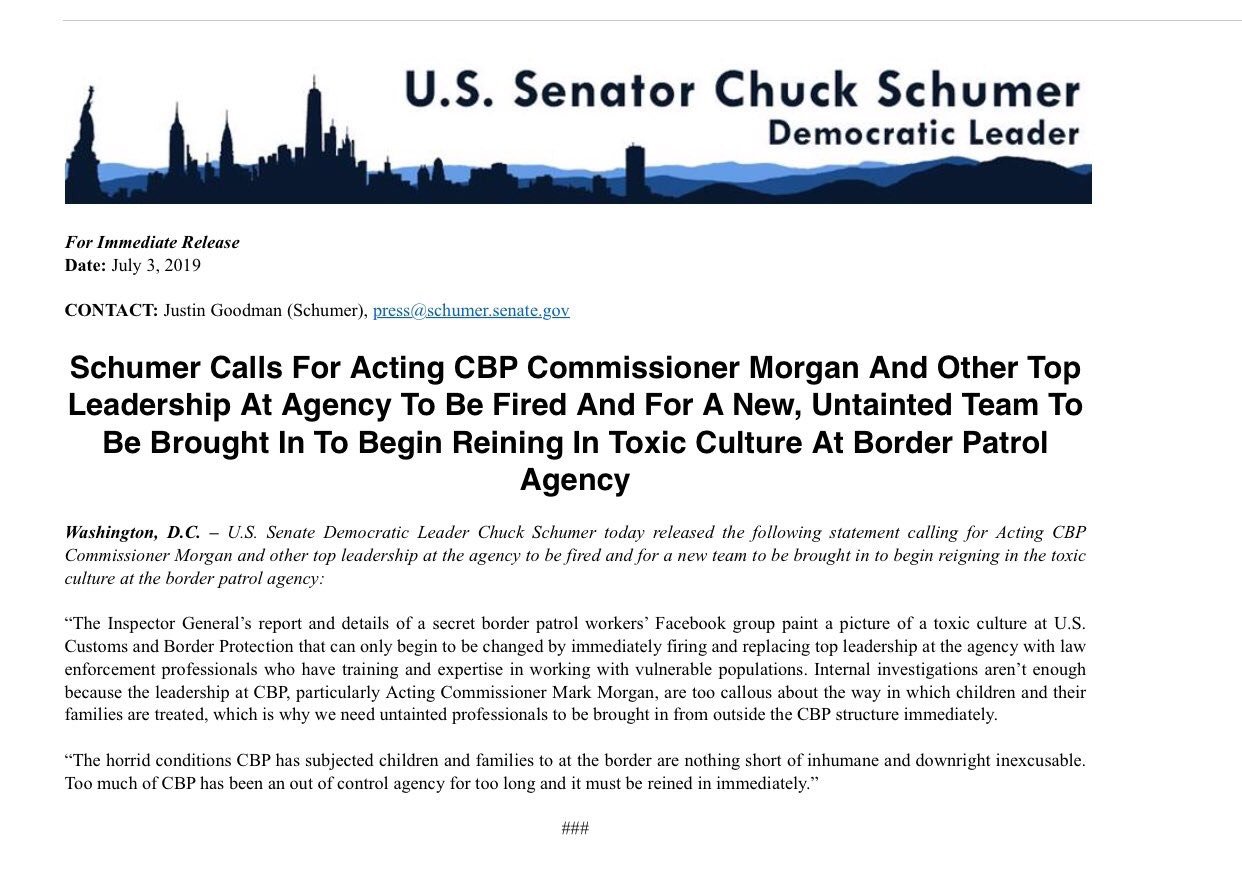 Pictured is a Chuck Schumer press release sent on July 3.

Schumer’s demands come as CBP has attracted heavy criticism from Democratic lawmakers over the conditions of its migrant detention facilities.

Several Democratic congressmen claimed to have witnessed horrible living environments when they toured several facilities Monday. A report from the Department of Homeland Security’s Office of Inspector General corroborated their claims that conditions were substandard. The New York senator also complained Wednesday about reports of a Facebook page run by current and former CBP agents containing offensive language and content. (RELATED: Dan Crenshaw Says Ocasio-Cortez Is ‘Getting Bolder With Her Lies’ About The Immigration Crisis)

Schumer’s office did not immediately respond to the DCNF’s request for comment.