President Donald Trump’s Fourth of July “Salute To America” has turned into another opportunity for partisan bickering over crowd size.

“I don’t know what the final count was, but that went all the way back to the Washington Monument,” the president said this morning. Trump also touted the crowd size in a tweet following the event.

A great crowd of tremendous Patriots this evening, all the way back to the Washington Monument! #SaluteToAmerica???????? pic.twitter.com/nJghdfqIhX

In response to the photo Trump tweeted of “Salute to America,” rumors spread on social media that a photo of a larger 2008 concert had been superimposed on the picture, causing Snopes to issue a fact-check to disprove them.

Chairman of the Democratic Coalition Jon Cooper did the same, saying, “Trump’s event in DC today has drawn an embarrassingly small crowd — despite his desperate attempts to boost attendance by adding flyovers and a display of tanks.” 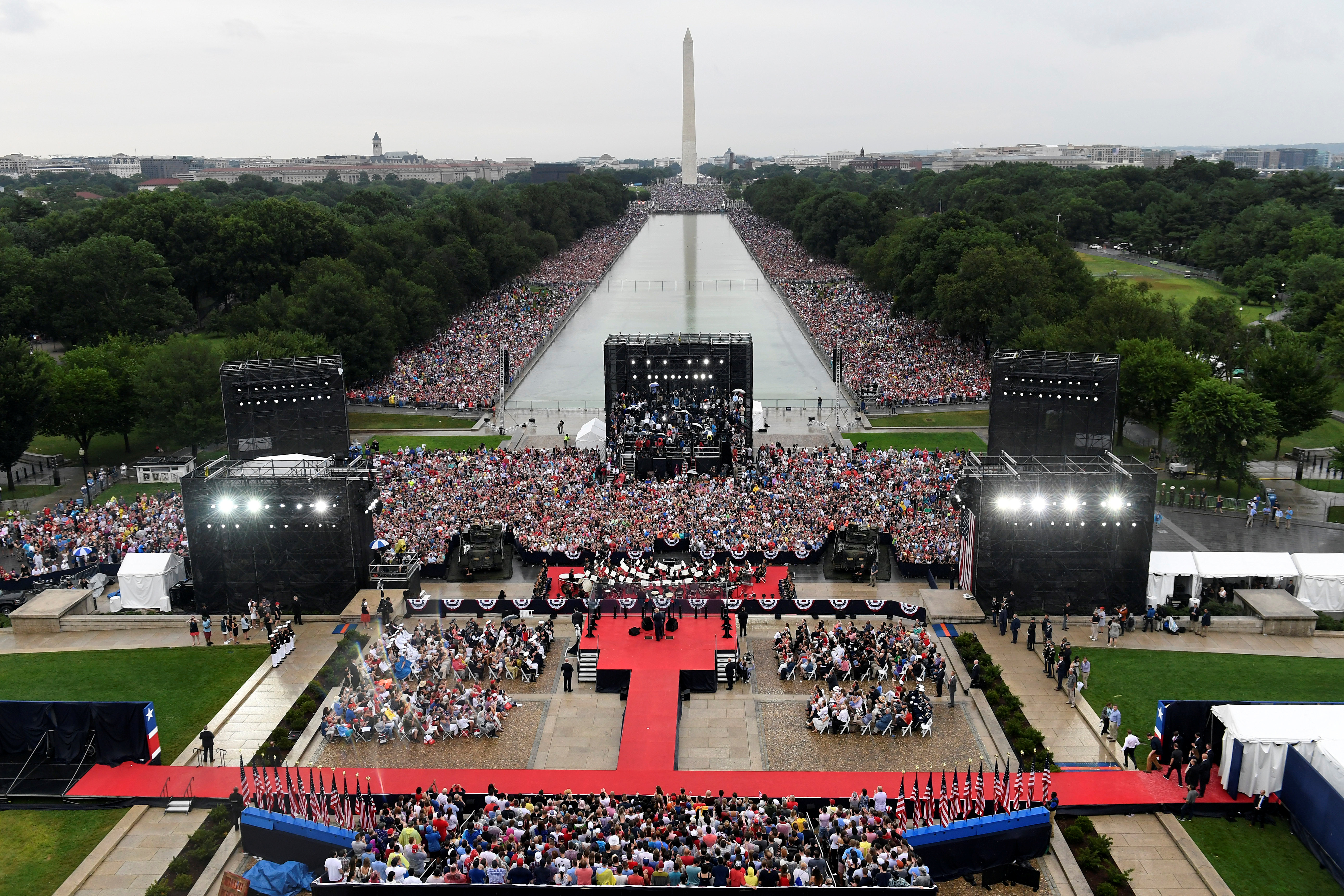 President Donald Trump speaks during an Independence Day celebration in front of the Lincoln Memorial in Washington, U.S., July 4, 2019. (Susan Walsh/Pool via REUTERS)

White House officials voiced concerns prior to “Salute to America” that thunderstorms and late-planning could result in a low attendance, reported the Hill. Worries also abounded that too many people had preexisting plans for the holiday when Trump announced the event.

Organizers were “scrambling” to hand out VIP tickets for the event, said the Washington Post. They even attempted to give tickets to a non-profit advocacy group barred from accepting government gifts to reach their objective of giving them all out.

The media was divided in interpreting the size of the crowd at Salute to America.

While Vox said “a decent audience turned out” for the event, the Huffington Post’s lead article Friday morning was entitled “Tepid Turnout,” and said the event “numbered possibly as little as the high tens of thousands.” The Huffington Post’s article was accompanied by an image showcasing a largely empty area adjacent to the Reflecting Pool — the back end of the VIP section.

A similar image of the same location was published by Business Insider, but the photo was labeled as showing people gathering ahead of the speech.

“People gather on the National Mall ahead of the ‘Salute to America’ Fourth of July event with US President Donald Trump at the Lincoln Memorial in Washington, DC, July 4, 2019,” the caption said. The caption Business Insider used is the one provided by Getty Images on the picture. 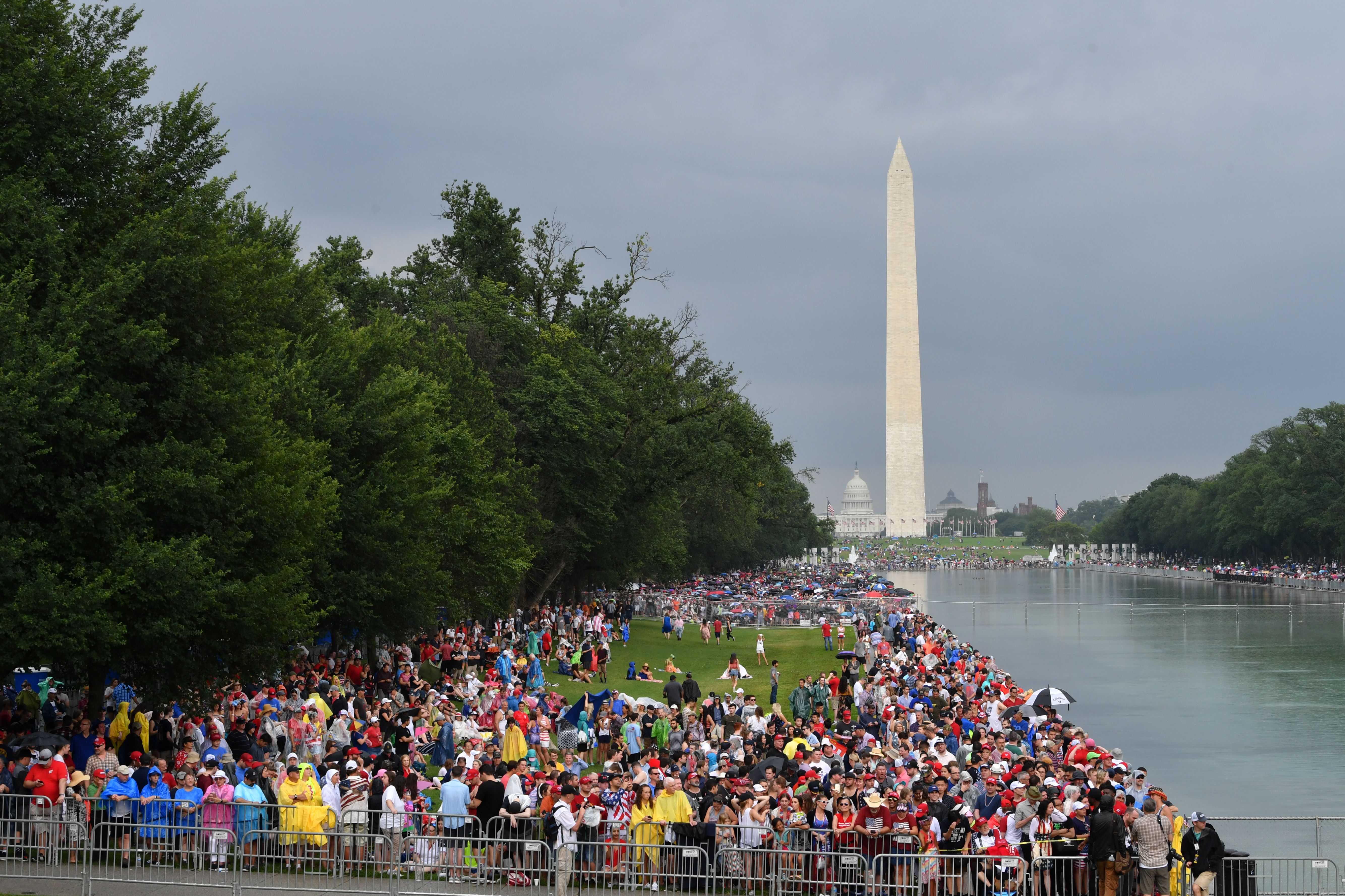 This image was labeled by Business Insider as showing crowds gathering ahead of the speech. (NICHOLAS KAMM/AFP/Getty Images)

Images taken prior to the speech also show the VIP area on the other side of the Reflecting Pool being filled in closer to the start of Trump’s speech than the area open to the general public. 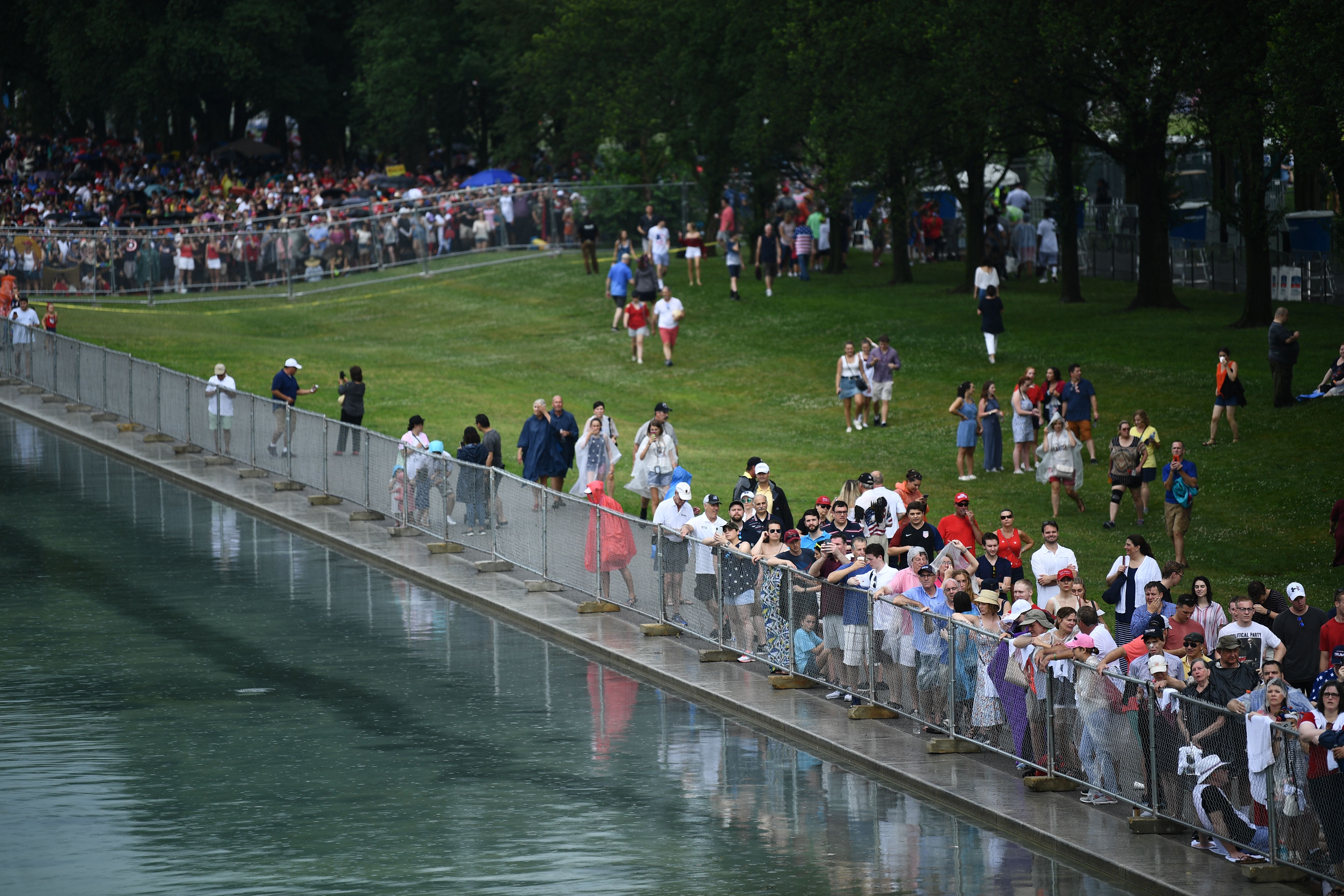 Crowds gathered in the back end of the VIP section after areas alongside the Reflecting Pool open to the general public had already been filled. (BRENDAN SMIALOWSKI/AFP/Getty Images)

In pictures taken during the speech, the back end of the VIP area appeared to remain slightly below capacity.

In the area open to the general public, there were multiple incidents of pushing, shoving, and verbal altercations due in part to the close quarters. For example, one woman shoved another woman for standing “too close” to her.

Other images of “Salute to America” show the crowd gathered to see the military aircraft and Trump’s address. 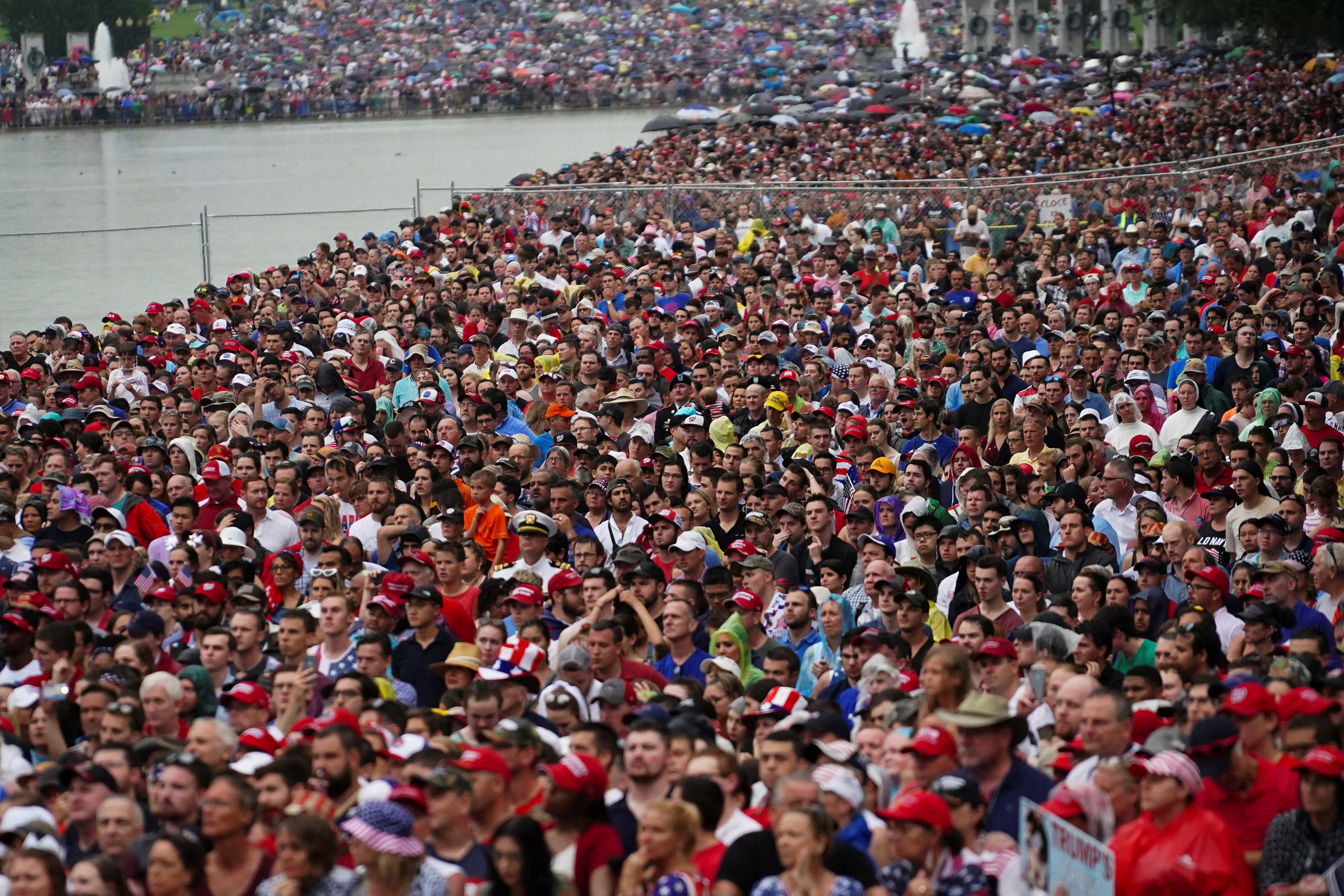 Onlookers braved frequent bouts of heavy rain, thunder, and lightning while waiting hours for the event to begin. (RELATED: Trump Delivers ‘Salute To America’ As Americans Brave Pouring Rain On The National Mall)

The focus on crowd size was anticipated as Trump has a history of concern over the topic, especially regarding the crowds at his inauguration. 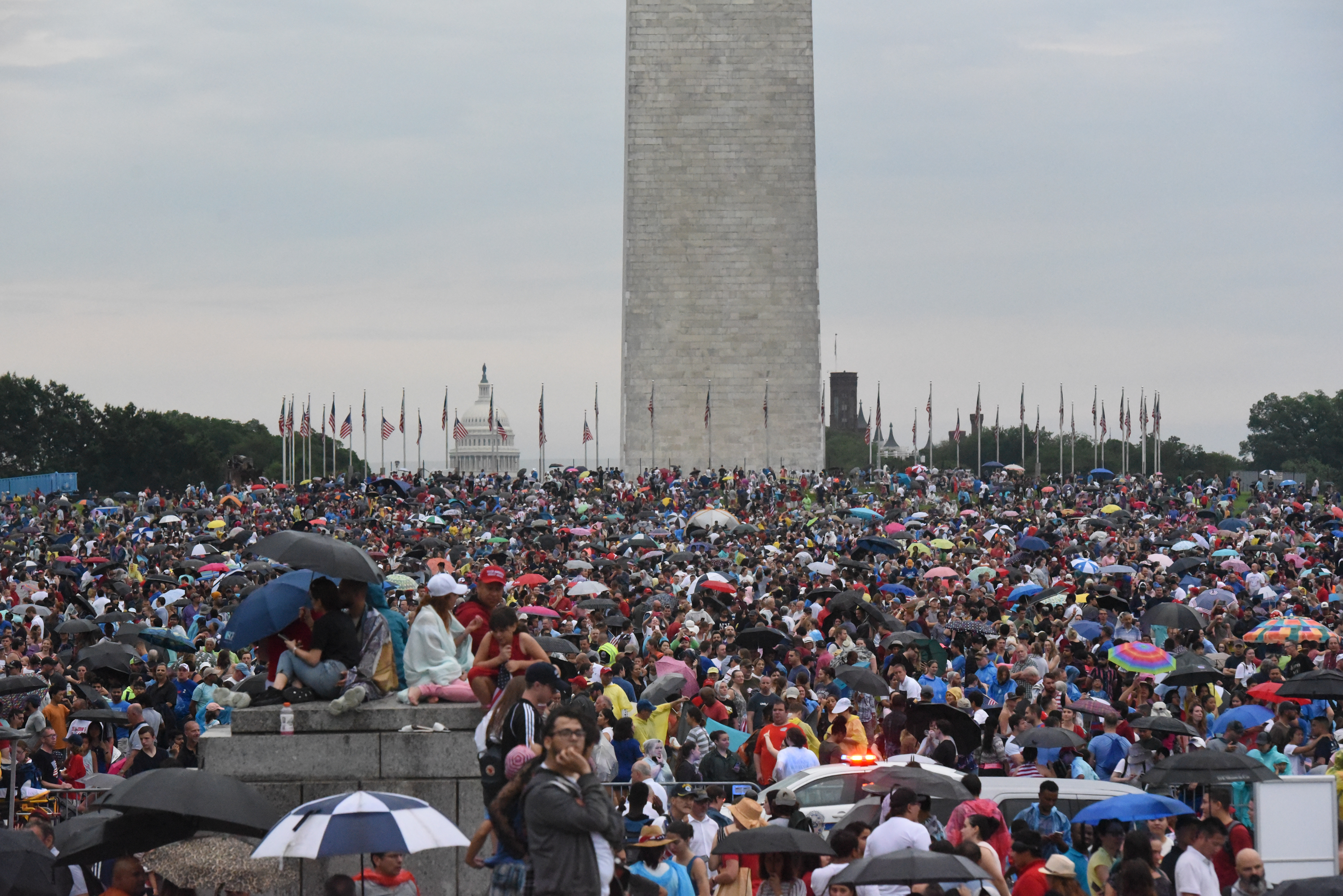 No official crowd size estimate for “Salute to America” has been released.