Sydney Elaine Leathers, the ex-sexting partner to ex-Rep. Anthony Weiner (D-N.Y.), is trying to work her magic to help get Mike Gravel elected president in 2020.

On Tuesday night, she offered voters a chance to donate even just $1 to Gravel’s presidential campaign.

I just donated to @MikeGravel & would appreciate if you guys did the same! If enough of my followers donate I’ll post some nudes! ????https://t.co/xTTauBAtq2

History is solid that Leathers isn’t afraid to plunge herself into politics.

Just two short years later, she helped expose Justin Moed, a Indiana State Democratic lawmaker who went by the nickname “Bitch Boy.” They chatted by text. He lavished her with gifts such as sex toys, money, a pink leash collar and Steve Madden pumps.

Moed, who is bald but has facial hair, is miraculously a Democratic whip in the Indiana House of Representatives.

Leathers is a huge AOC fan. Back in January, when trolls tried to release a photograph of a partially nude woman hanging out in a bathtub and say it was Rep. Alexandria Ocasio-Cortez (D-N.Y.), Leathers quickly stepped forward to reveal that the woman was actually her. (RELATED: Sydney Leathers Rides In On A White Horse For AOC)

At the time, she called AOC a “national treasure.”

Gravel gave leathers a personal Twitter shout-out for her help.

He said the president should view sex work as “any other” work. 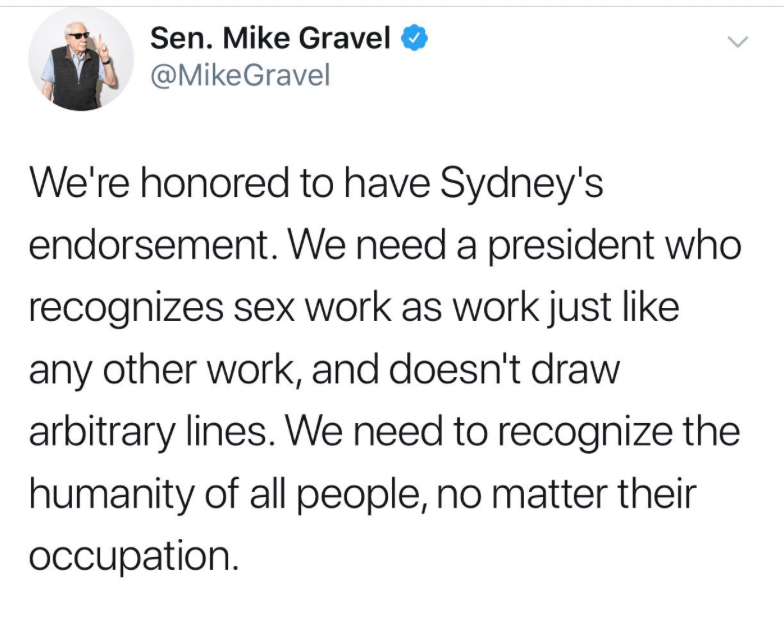 Gravel also appears to be egging her and anyone else on who wants to help him make this happen.

“Folks: if we keep up the pace from today we’ll qualify in TWO DAYS,” he tweeted Tuesday. “Let’s do it: evangelize, convince your friends, family, your loved ones, your worst enemies. We’re this close. Do everything it takes. And THANK YOU for all of your help.”

Leathers responded to this story on Twitter, writing, “Everyone involved in politics is a whore, I’m just open & honest about it.”

She has not yet posted any nude pics on behalf of Gravel.

But she appears to be a woman of her word.