The Department of Justice (DOJ) and Department of Homeland Security (DHS) announced a new rule Monday indicating that migrants who cross the southern border are not eligible for asylum unless they apply in the first safe country they enter.

The rule, which only applies to prospective claims and will be finalized Tuesday, would effectively torpedo the current flood of asylum seekers, which consists mainly of Central American migrants who cross through multiple countries before reaching the U.S.

“The United States is a generous country but is being completely overwhelmed by the burdens associated with apprehending and processing hundreds of thousands of aliens along the southern border. This Rule will decrease forum shopping by economic migrants and those who seek to exploit our asylum system to obtain entry to the United States—while ensuring that no one is removed from the United States who is more likely than not to be tortured or persecuted on account of a protected ground.”

Migrants who claim credible fear when they reach the U.S. — but did not apply for asylum in a country they traversed through, whether Mexico, Guatemala, etc. — will thus be removed. The DOJ and DHS said that they expect the rule will allow them to more efficiently process asylum claims, which have recently backlogged the immigration system. 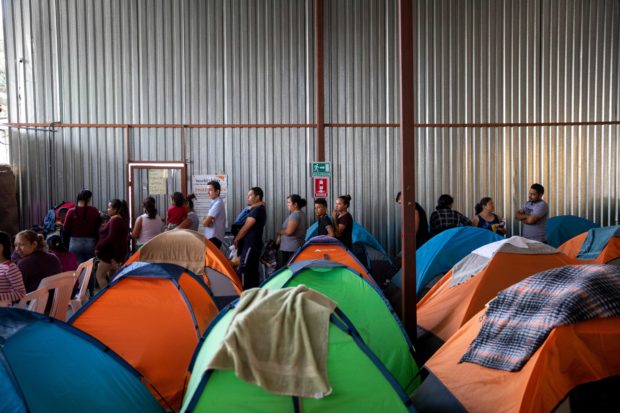 Tents are piled up in a hangar at Juventud 2000 migrant shelter in Tijuana, Baja California state, Mexico on July 13, 2019. – Asylum seekers in the US are overflowing shelters in Mexico waiting for their claims to be processed. (Photo by EDUARDO JARAMILLO CASTRO/AFP/Getty Images)

“Ultimately, today’s action will reduce the overwhelming burdens on our domestic system caused by asylum-seekers failing to seek urgent protection in the first available country, economic migrants lacking a legitimate fear of persecution, and the transnational criminal organizations, traffickers, and smugglers exploiting our system for profits,” acting DHS Secretary Kevin McAleenan said in a statement.

The ruling stems from provisions in the Immigration and Nationality Act, which states that migrants denied asylum will be sent back to the country they traversed through, and that migrants cannot resettle in another country and then come to the U.S. to claim asylum.

In order to be considered “safe” for asylum seekers, a country has to have signed one of three relevant international treaties: the 1951 Refugee Convention, the Protocol Relating to the Status of Refugees, or the UN Convention against Torture.

If none of the countries that a migrant passes through are signatories, then the migrant may still apply for asylum in the U.S. 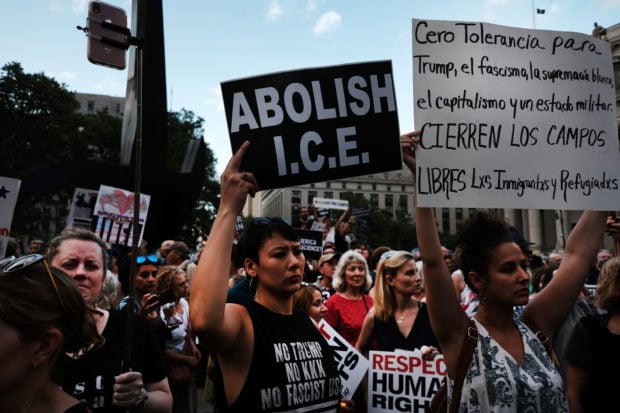 NEW YORK, NY – JULY 12: Hundreds of people gather in lower Manhattan for a “Lights for Liberty” protest against migrant detention camps and the impending raids by Immigration and Customs Enforcement (ICE) this coming weekend in various cities on July 12, 2019 in New York City. (Photo by Spencer Platt/Getty Images)

A migrant also may still be eligible for asylum in the U.S. if they apply in another country but are denied refuge, or if they are a victim of severe human trafficking. (RELATED: Trump Considering More Restrictions Against Asylum Seekers, Says Report)

The U.S. has faced an unprecedented number of migrants crossing the southern border this year, leading to overcrowding in detention centers and a backlog in immigration courts. President Donald Trump has called the situation a humanitarian and national security crisis.

Meanwhile, Immigration and Customs Enforcement (ICE) started a nationwide operation over the weekend to arrest and remove people living in the U.S. illegally. The operation specifically targets people who have already been ordered to leave the country. (RELATED: Trump’s ICE Deportation Raids Reportedly Begin In New York)