The Supreme Court’s public information office said Stevens died from complications of a stroke suffered earlier in the day.

“A son of the midwest heartland and a veteran of World War II, Justice Stevens devoted his long life to public service, including 35 years on the Supreme Court,” Chief Justice John Roberts said in a statement. “He brought to our bench an inimitable blend of kindness, humility, wisdom and independence. His unrelenting commitment to justice has left us a better nation.”

“We extend our deepest condolences to his children Elizabeth and Susan, and to his extended family,” the chief added.

The justice’s 35 year tenure is the third longest in the Court’s history. When he retired in 2010 at age 90, he was the second oldest justice ever to sit on the high court.

Steven’s signature bowties reflected his singularity. A Republican of moderate, midcentury vintage, he emerged as an unlikely progressive hero during the ascendancy of the conservative legal movement, an indefatigable figure who bridged the 70s-era Court of liberal social activism with the latter-day conservative counter-reaction.

At the twilight of his career, Stevens was decisive in Bush-era disputes over the rights of detainees in the War on Terror. He delivered the Court’s 2004 opinion in Rasul v. Bush, declaring that inmates in Guantanamo Bay, Cuba could challenge their detention in the federal courts. Two years later in Hamdan v. Rumsfeld, he led a five-justice majority in striking down the military commission system the Bush administration erected to try enemy combatants.

He brought particular indignation to bear in the 2000 Bush v. Gore decision, writing a scathing dissent that produced the dispute’s most resonant line.

“Although we may never know with complete certainty the identity of the winner of this year’s presidential election, the identity of the loser is perfectly clear,” Stevens wrote. “It is the nation’s confidence in the judge as an impartial guardian of the rule of law.”

Yet Stevens defied easy ideological characterization, sometimes earning the much-abused “maverick” label. He joined his right-leaning colleagues in dissent from the Supreme Court’s 1989 decision striking down a state law that prohibited desecration of the American flag. (RELATED: It’s Not Donald Trump’s Supreme Court Yet)

“The creation of a federal right to post bulletin boards and graffiti on the Washington Monument might enlarge the market for free expression, but at a cost I would not pay,” Stevens wrote. “Similarly, in my considered judgment, sanctioning the public desecration of the flag will tarnish its value — both for those who cherish the ideas for which it waves and for those who desire to don the robes of martyrdom by burning it.”

Confirmed amid the social chaos of white flight and urban decay, Stevens obliged law and order efforts early in his tenure, furnishing the fifth vote to reinstate capital punishment in the 1976 Gregg v. Georgia decision. The justices had barred criminal executions just four years earlier in Georgia v. Furman. But with the passage of time, Stevens became something like a death penalty abolitionist. He wrote the Court’s opinion barring execution of the mentally disabled on constitutional grounds in 2003. By 2008, he condemned “state-sanctioned killing” altogether, saying it was “becoming more and more anachronistic.”

For decades Stevens cultivated a low profile, even as some of his colleagues became fixtures of the culture war or the capital’s social circles. However, he could not avoid the intense scrutiny that followed his 2006 opinion in Kelo v. New London, in which the Court said government could use eminent domain to seize private property for economic development. The case arose when a city agency took Susette Kelo’s home to build a plant for pharmaceutical giant Pfizer. The justice dutifully accepted the popular outcry that followed his decision.

“My opinion for the Court in Kelo v. City of New London is the most unpopular opinion that I wrote during my more than thirty-four years on the Supreme Court. Indeed, I think it is the most unpopular opinion that any member of the Court wrote during that period,” Stevens said in his 2019 memoir, “The Making of a Justice.” Unmoved by the appraisals of critics, he defended his decision over the ensuing ten pages. 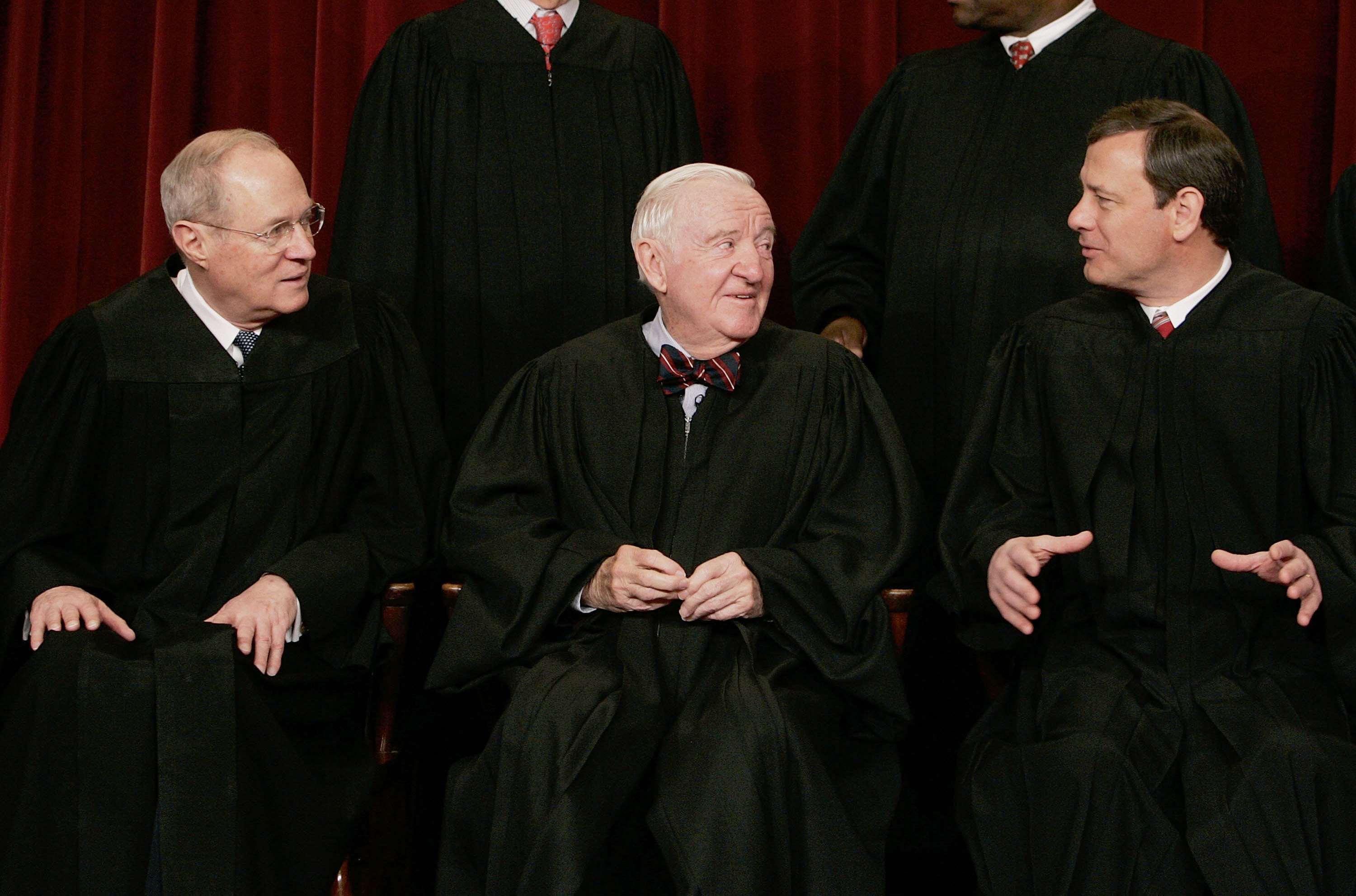 The 2010 Citizen’s United v. FEC decision augured the end of Stevens’s tenure. Though he was deeply aggrieved with the Court’s decision, the justice struggled to read his dissent from the bench, invariably slurring and mispronouncing his words. Stevens had suffered a minor stroke. He resolved to retire shortly thereafter, and Justice Elena Kagan would succeed him later that year.

All told, Stevens produced a staggering volume of legal opinions, touching presidential power, the First Amendment, property rights, and campaign finance. Yet the newly entrenched conservative majority on the high court could make quick work of his legacy. Just last month, the conservative justices signaled that a landmark Stevens decision on agency power should be reconsidered.

After leaving judicial service, Stevens occasionally attracted headlines for his political interventions. He wrote an opinion piece for The New York Times in 2018 urging a total repeal of the Second Amendment after the “March for Our Lives” demonstrations. One of Stevens’s last major writings on the Court was his 2008 dissent in D.C. v. Heller, which announced a constitutional right to keep firearms in the home for self defense. That dissent was significant because it argued on originalist terms, showing a legal method favored by conservatives could produce liberal outcomes.

Another political foray was more surprising still. Stevens criticized Justice Brett Kavanaugh’s demeanor during the Senate hearings that followed Christine Blasey Ford’s allegations of sexual misconduct. The retired justice said Kavanaugh’s sharp rhetoric undermined his temperament and impartiality. Members of the Court do not comment on pending nominations as a cardinal rule. (RELATED: Was Brett Kavanaugh Saved By His Enemies)

The scion of a wealthy Chicago family, Stevens moved in rarified circles as a child. His father was an accomplished hotelier, who owned and operated the La Salle and Stevens Hotels, the latter of which sat on Michigan Avenue near the city’s famed Magnificent Mile. The future justice met the defining figures of the era like Amelia Earhart, saw Franklin Delano Roosevelt accept the Democratic nomination for president in 1932, and watch baseball slugger Babe Ruth call his home run shot at Wrigley Field during the fifth inning of game three in the 1932 World Series.

A graduate of the University of Chicago, Stevens joined the Navy at the outbreak of World War II. Serving in Hawaii as an intelligence officer, he received a commendation for his work decoding the enemy transmissions that led American forces to shoot down Japanese Admiral Isoroku Yamamoto’s plane.

He went on to the Northwestern University School of Law and a clerkship on the Supreme Court for Justice Wiley Rutledge after his military service. Following brief stints as an attorney-advisor to a congressional panel and the Eisenhower administration, Stevens entered private practice as an antitrust specialist.

He emerged as a national legal figure in the late 1960s when he led an investigatory commission pursuing corruption cases in Illinois. President Richard Nixon appointed Stevens to the 7th U.S. Circuit Court of Appeals in 1970. President Gerald Ford selected Stevens to succeed Justice William Douglas on the Supreme Court in 1975.