Democratic opposition to Justice Brett Kavanaugh’s nomination for the Supreme Court was as determined as it was ham-fisted.

Framing fresh reporting with intelligent analysis, authors Mollie Hemingway and Carrie Severino skillfully catalogue the stunning blunders that made Kavanaugh’s confirmation possible in their new book, “Justice on Trial: The Kavanaugh Confirmation and the Future of the Supreme Court.” After dozens of interviews with Republican lawmakers, members of the high court, and President Donald Trump, the pair persuasively show the story of Kavanaugh’s nomination is in many respects a story of Democratic ineptitude.

Hemingway and Severino will be familiar to right-leaning readers. Hemingway’s political commentary is a fixture of Fox News programming, and Severino is chief counsel of the Judicial Crisis Network (JCN), the axis of conservative spending and organizing around judicial confirmations.

Unsurprisingly, the book has a decidedly conservative valence. Hemingway and Severino said their project was important for shaping historical perception of the Kavanaugh confirmation, noting attitudes toward Justice Clarence Thomas’s contentious nomination have changed with time.

“After the Thomas hearings, the vast majority of people polled said that they believed Clarence Thomas and found Anita Hill not credible,” the authors told the Daily Caller News Foundation. “An unrelenting, decades-long propaganda campaign changed the way people viewed that story.”

“The Kavanaugh confirmation last year was the most important thing that happened to the country, and it was important to make sure there was a record of what had happened from the people who were there and witnessed it to ensure that the facts speak for themselves,” they added. (RELATED: It’s Not Donald Trump’s Supreme Court Yet)

The sequence of errors began with the ill-considered filibuster of Justice Neil Gorsuch’s nomination. After Democrats mustered 45 votes to prolong debate on Gorsuch’s confirmation, the GOP invoked the so-called “nuclear option,” a procedural move that allowed Republicans to break the filibuster with a bare majority instead of the usual 60 votes.

The filibuster made little sense at the time. Since Gorsuch was replacing the late Justice Antonin Scalia, his confirmation would not have changed the ideological composition of the Court.

It makes less sense in hindsight, because Gorsuch is proving decidedly independent as a justice. His far-reaching skepticism of federal power has led him to break with his conservative brethren on immigration, Indian tribal rights, and criminal procedure issues. As such, he was probably the best nominee Democrats could reasonably expect from a Republican president.

The prospect of a filibuster would have dramatically changed the atmosphere surrounding Kavanaugh’s nomination. Senate Majority Leader Mitch McConnell might have succeeded in effecting a rule change under those most trying circumstances, but it would have been a bastard of an effort.

Equally strange was the opposition messaging in the weeks that followed Kavanaugh’s nomination. Before taking the bench in 2006, Kavanaugh worked in the Bush White House, first as an attorney and then as staff secretary. In those capacities, he generated an enormous body of written work which lawmakers in both parties wished to scrutinize. McConnell counseled the Trump administration against picking Kavanaugh on that basis alone, anticipating the long paper trail would be a productive vein for Democratic obstructionism.

As expected, Democrats insisted on a sweeping document production, asking for Kavanaugh’s work product as a White House lawyer and for materials he handled as staff secretary. The request was on the order of one million records. Demands for radical transparency dominated Democratic messaging over the summer. When Kavanaugh’s first confirmation hearing was gaveled into session, Democrats said the document disclosure was insufficient, and accused Republicans of crafting a cover up.

Republicans did not believe production on that scale was necessary or probative. Yet Hemingway and Severino report that conservatives were thrilled to fight over process instead of substantive issues like abortion. Senate Republicans made the document dispute the fixture of the confirmation battle, steadily releasing caches of documents while boasting of the Judiciary Committee’s “historic transparency.” 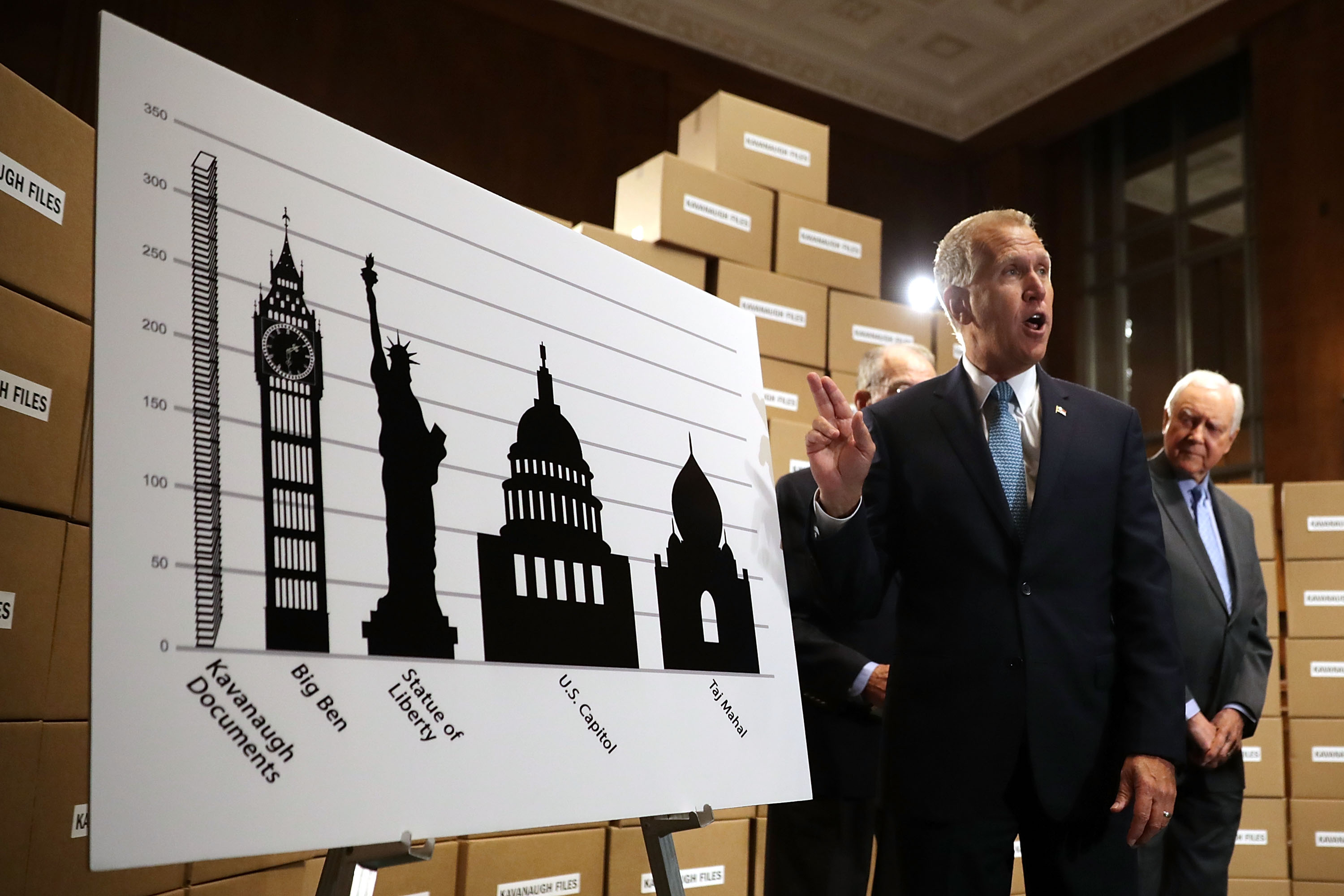 “The Republicans’ focus on the mundane topic of document retrieval was also strategic,” the authors write. “The goal, says Garrett Ventry, a communications strategist hired by the Judiciary Committee, was to ‘make it really, really boring, where the public wouldn’t care and their base would be deflated because they were fighting us over whether or not they had enough documents to review.'”

“Fighting over documents meant they were not talking about Roe v. Wade or Judge Alex Kozinski,” they authors add. Kozinski was a judge on the 9th U.S. Circuit Court of Appeals who retired after 15 women accused him of sexual misconduct. Kavanaugh clerked for Kozinski after graduating from Yale Law School.

For a time, Sen. Dianne Feinstein of California, the ranking Democrat on the Judiciary Committee, followed a wiser course. Feinstein and committee chairman Sen. Chuck Grassley of Iowa reached a tentative accord to produce what the authors style a “large but defensible set of documents” that could have delayed the confirmation hearing for months. The deal was undone by Feinstein’s own staff.

Quite apart from the unusual circumstances in which the allegations finally emerged, the authors report undecided Republicans were troubled to learn Feinstein had arranged for Ford’s legal representation. The attorney her office recommended was Debra Katz, a left-leaning litigator with ties to Democratic politics.

When Ford testified before the Judiciary Committee, Collins, Murkowski, and Flake were “appalled” to learn Katz and co-counsel Michael Bromwich might have undermined efforts to accommodate their client, the authors report. For example, Republican committee staff told Ford’s lawyers they were willing to take her testimony near her home in California, without the drama of a public hearing. Ford appeared unaware of that offer when asked about it during her testimony.

The Collins-Flake-Murkowski triad reflected an old-school institutionalist Republicanism that cared intensely about proper protocol. That Ford’s allegations broke weeks after she privately confided in Feinstein, who in turn relayed Ford to the care of a progressive stalwart, was gravely damaging to the Democratic effort.

All told, those tactical mistakes “really hurt Democrats with the votes that mattered most, the moderates and the undecided senators who were looking at this going ‘this is not how we should be interacting with each other,'” the authors told the DCNF.