Voice of America (VOA) has ignored previous warnings on the alleged violations and remained silent on condemning the anti-Trump posts posted on a Facebook page likely run by an editor at their news agency.

The Facebook page likely belongs to be Doug Bernard Johnson, who is the editor for VOA’s Press Freedom. The page contains anti-Trump messages dating back years. VOA has a social media policy which requires employees to be impartial in public spaces, to “adhere to a high standard of independence and objectivity” and more.

The Facebook page was brought to Bridget Serchak, VOA’s Director of Public Relations and VOA Director Amanda Bennett’s attention Sunday by the Daily Caller News Foundation. VOA had been made aware of Johnson’s anti-Trump posts multiple times in the past, a former VOA program manager told the DCNF.

Bennett and the U.S. Agency for Global Media’s (USAGM) CEO John F. Lansing ignored the warnings. USAGM is a government global media agency that operates above VOA, which is the largest U.S. international broadcaster. VOA is government-owned and paid for by taxpayers.

The DCNF asked for an update Tuesday on whether or not Johnson violated VOA policy, and what, if any, repercussions there would be. When asked for a timeline and what the procedure is for reviewing whether an employee has violated VOA’s policies, VOA’s Director of Public Relations was unable to provide any answers.

“Thanks for the follow up,” Bridget Serchak, VOA’s Director of Public Relations, told the DCNF Tuesday, days after the DCNF first emailed about the page. “I promise I will be in touch when I have an update to provide to you, but I do not have a timeline for you.”

“Professionalism at VOA is dead, because Amanda Bennett and John Lensing killed it,” a VOA employee told the DCNF.

The Facebook page operates under the name “Doug Johnson.” Doug Bernard’s last name is Johnson, but uses the name “Bernard” at VOA because another reporter shared his name when he first began at the news agency, VOA previously told the Daily Caller News Foundation.

After the DCNF contacted VOA for a comment on Johnson’s Facebook contents, a staff-wide email was sent to VOA employees, which was obtained by the DCNF. The email was “another in a series of reminders about the guidelines for social media activity” with a section of VOA’s “Best Practices Guide” copied into the email.

The social media policy includes adhering “to a high standard of objectivity.” 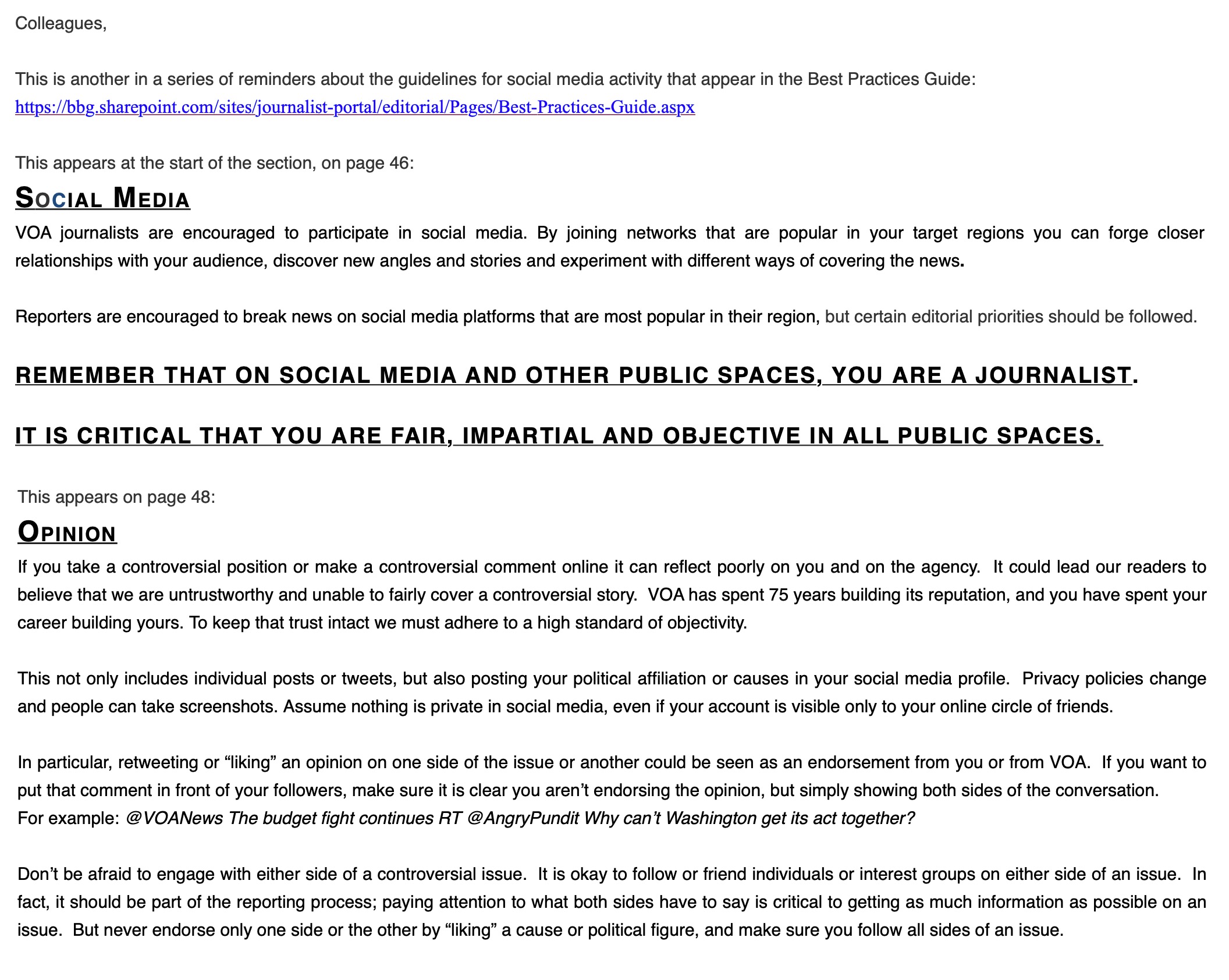 A staff-wide email was sent out after the DCNF contacted VOA about anti-Trump posts likely on an editor’s Facebook page. (Screenshot/DCNF)

VOA strives to “represent America” and will be “accurate, objective, and comprehensive,” according to its mission and values page.

Posts on the Facebook page include sharing a video which includes lyrics such as “yes the USA’s now governed by a fuck-cheeto with hair” and “three cheers for fucking Trumpy and his neo-Nazi crew.” Another post shares an image with a dog in front of “Fuck Trump” graffiti. 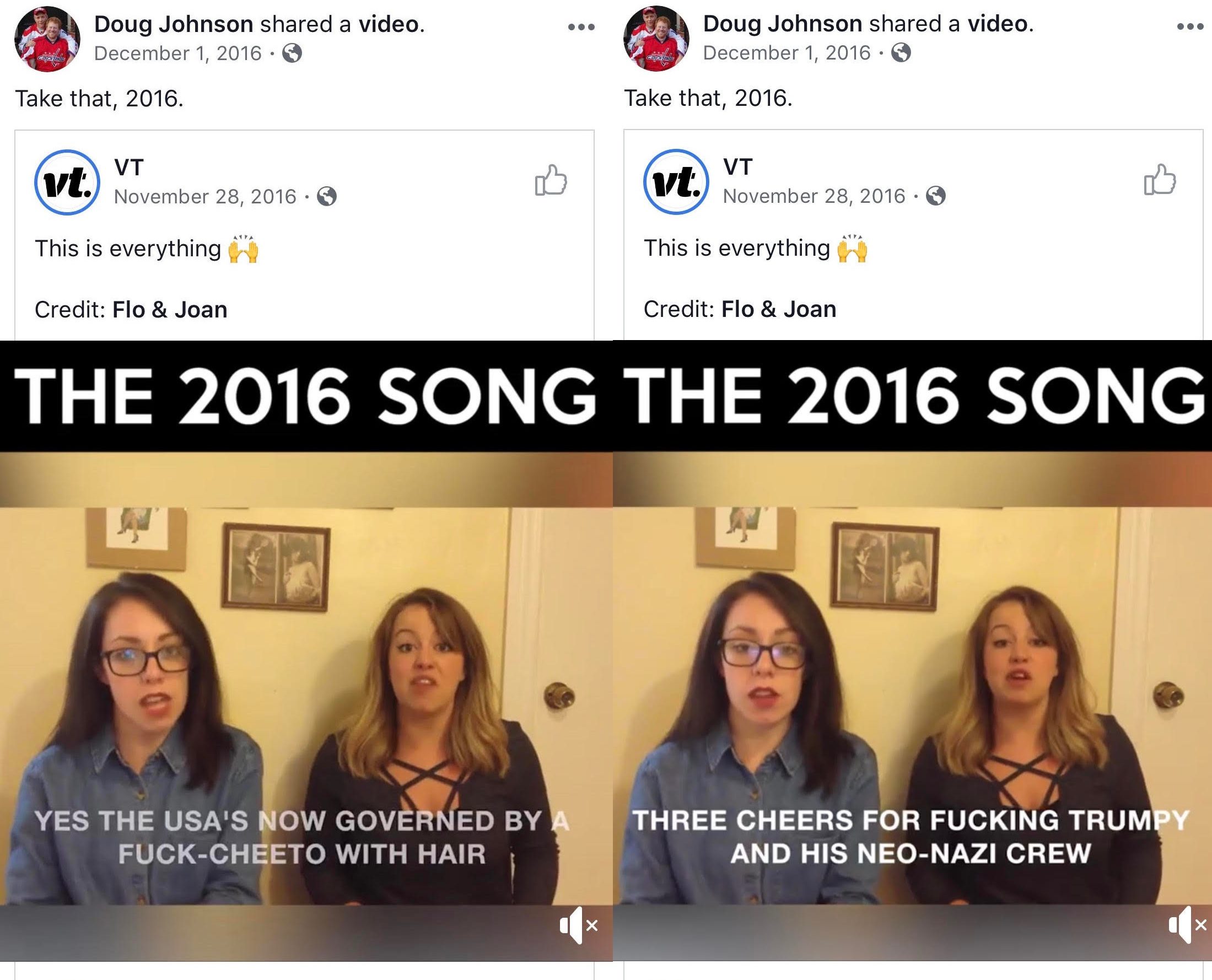 The Facebook page, which shows photos matching Doug Bernard of VOA, re-posted an anti-Trump video in 2016 with a caption that reads “Take that, 2016.” (Facebook Screenshot/Doug Johnson) 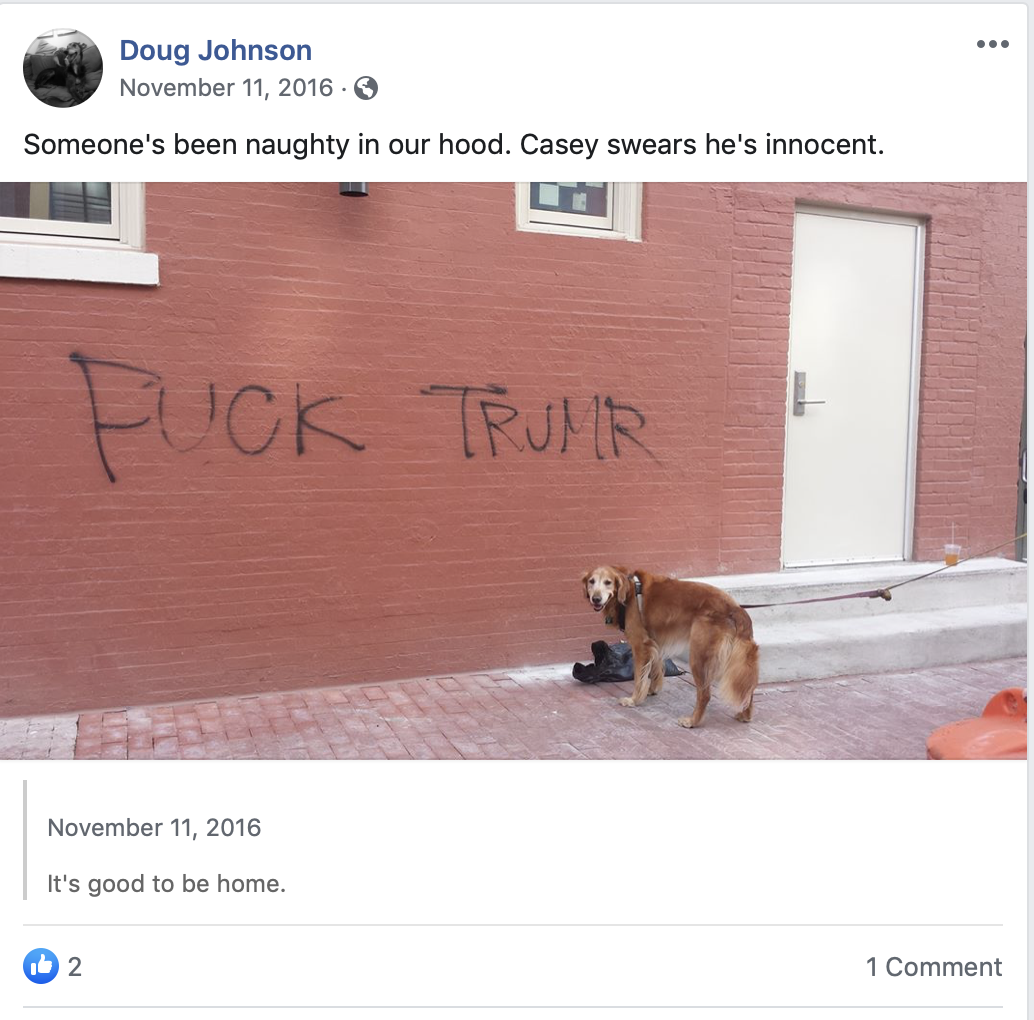 VOA has been active in condemning President Donald Trump and his rhetoric about journalists, but has stayed silent on attacks of some conservative journalists such as Andy Ngo, who suffered a brain hemorrhage after a July 26 attack by Antifa. (RELATED: Organizations For Journalists Not Reporting On The Attack On Andy Ngo After A Week)