The House of Representatives passed a bill Thursday that would raise the federal minimum wage to $15 an hour, setting up a vote in the Senate which will likely fail.

The House vote was 231-199. Three Republicans supported it while six Democrats opposed it. The Raise the Wage Act would bring the federal minimum wage up from $7.25 to $15 by 2025, which progressive Democrats have been pushing for. However, the Republican-controlled Senate is likely to vote against the legislation.

House Minority Leader Kevin McCarthy blasted Democrats in a statement to the Daily Caller after the vote, saying the party is jeopardizing the prosperity for all Americans.

“The United States is in the midst of enjoying the best economy we have seen in a generation. The Democrats’ minimum wage hike is another one of their Washington-knows-best policies that is not only out of touch with the rest of America, but will result in a reversal of the recent economic gains Americans around the country have been experiencing,” McCarthy said.

“I had the privilege of starting my own deli business when I was young, so I understand firsthand how unnecessary regulations, taxes, and mandates can prevent businesses from hiring and expanding. House Democrats jeopardized the prosperity of all Americans today just to deliver on an unpopular partisan pledge,” he continued.

Texas Republican Rep. Chip Roy echoed a similar message to the Daily Caller, saying the legislation is a failed policy.

“The $15-minimum wage has proven itself a failed policy in cities around the nation. Market-forces and individual preferences should dictate the price of labor, not the federal government from down on high,” Roy said to the Daily Caller.

“The CBO estimates up to 3.7 million Americans would lose their jobs as a result of this legislation. The People’s House should be reducing regulations and burdens on employers so they can create more jobs, not pushing legislation that will strip jobs from hard-working Americans,” Roy continued. 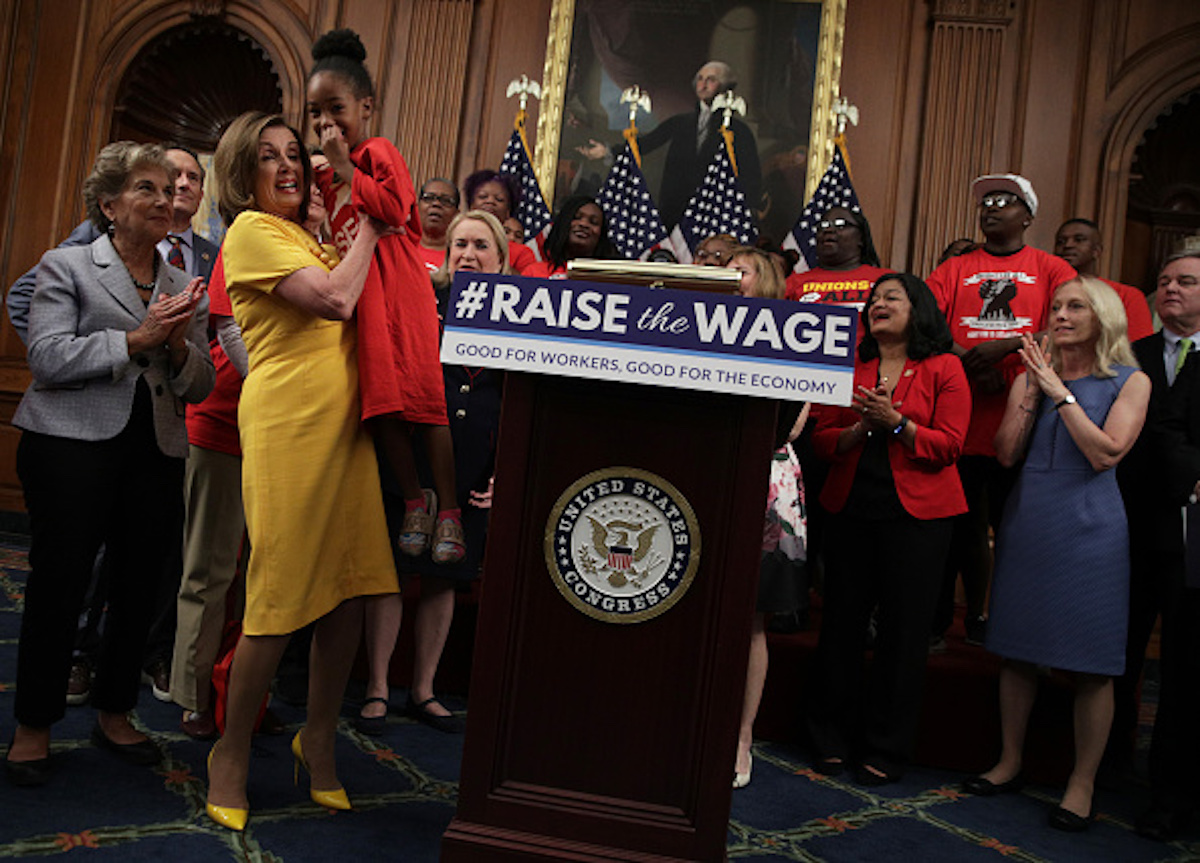 Speaker of the House Rep. Nancy Pelosi holds up seven-year-old Kassidy Durham of Durham, North Carolina, during a news conference prior to a vote on the Raise the Wage Act July 18, 2019 at the U.S. Capitol in Washington, DC. (Photo by Alex Wong/Getty Images)

Samantha Summers, Employment Policies Institute (EPI) communications director, released the following statement regarding the $15 minimum wage: “There’s nothing ‘moderate’ about a 107-percent hike in the federal minimum wage. Lawmakers should listen to economic experts, restaurant workers, and the Congressional Budget Office, all of whom warn that $15 would be disastrous for employees and employers.”

Servers and bartenders in the Washington, D.C., restaurant industry were quick to criticize Democratic New York Rep. Alexandria Ocasio-Cortez for supporting the “One Fair Wage” campaign, which calls to raise the minimum wage for tipped workers to a full minimum wage at the federal level, very much like the legislation which passed the House. (RELATED: DC Restaurant Industry Rips Ocasio-Cortez After Pushing For $15 Minimum Wage For All)

The Washington, D.C. city council voted to repeal an initiative that would have raised the minimum wage for all tipped employees in an 8-5 vote in October 2018 after continued pushback from workers across the nation’s capital.