‘Be A Leader’: Chuck Schumer Fires Back At Trump Over ‘Petty, Unserious Letter’

‘We’re All In This Together’: New England Patriots Ship 300,000 Masks To New York Healthcare Workers

Singer-Songwriter Bill Withers Dies At 81 Due To Heart Complications

New York City Schools Chancellor Richard Carranza ignored reports of disabled students being sent to a school in “deplorable” condition for over a year, reports say.

Disabled public school students in Queens, New York, must attend school in a run down old building, a building with conditions likened to a “Dickens novel,” according to the New York Post.

The publican reports that PS 9, the Walter Reed School, is covered in scaffolding, has black tarps and grime on the windows and peeling paint. (RELATED: White Privilege Survey Posted At NYC School With Virtually No White Students)

Students at PS 9 face “challenges such as emotional disturbances, autism, and language disorders,” according to the Post, but the building is not wheelchair accessible and has no elevators. Students eat in a cafeteria in the basement of the building, and there are no street signs indicating that it is a school zone.

The school only has one bathroom per floor, causing girl students to wait in line while boys used the bathroom.  Students who need their diapers changed must be assisted on ” a bench with a frayed vinyl top,” including students in their teenage years.

“I saw a kid with Down Syndrome going sideways up the stairs,” said Democratic New York City Councilman Robert Holden according to the Post. “They have to hold on with two hands on the banister, taking one step at a time.”

A New York Department of Education spokesperson told the Post that the building does not have asbestos or “excessive lead in the faucets,” according to the Post, but reportedly would not say if the paint had been tested for lead.

But when lawmakers tried to draw attention to the deplorable conditions at PS 9 to Carranza, he replied, “We treat everyone the same.” 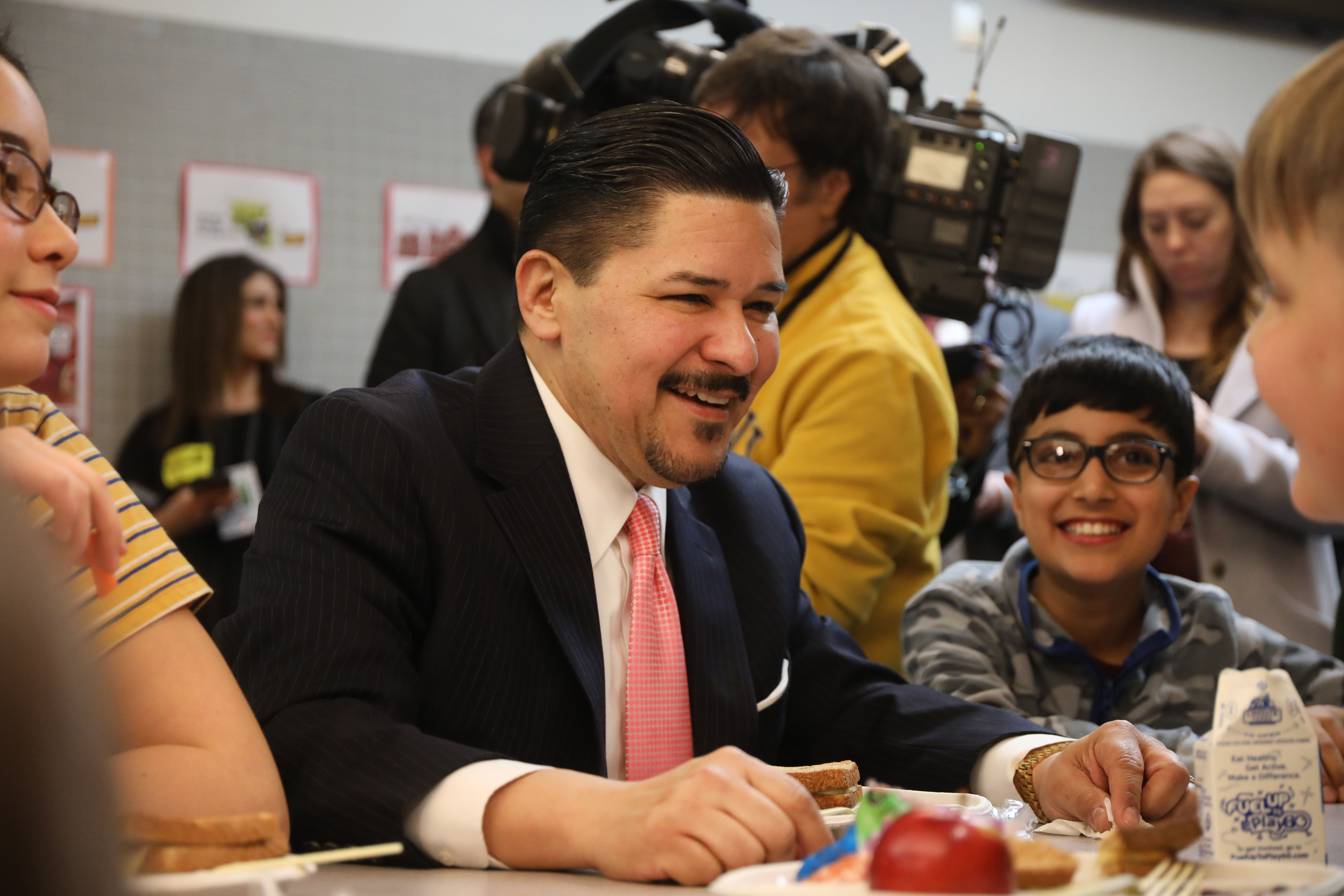 NEW YORK, NEW YORK – MARCH 11: Schools Chancellor Richard Carranza joins New York Mayor Bill de Blasio and school children for lunch at PS130, a Brooklyn public school, for an announcement about Meatless Monday’s on March 11, 2019 in New York City. Citing healthy eating habits for children and the environmental impact of too much meat in our diet, Mayor de Blasio and Schools Chancellor Carranza will begin having all public school serve an all vegetarian menus on Mondays beginning in the 2019-2020 school year. (Photo by Spencer Platt/Getty Images)

Holden himself visited the school and found the conditions “heart breaking,” according to the Post, prompting him to write a May 2018 letter to Carranza describing the situation and saying that the children deserved better.

“The classrooms are falling apart, there aren’t enough bathrooms, and the cafeteria and kitchen are partitioned off in the deplorable excuse for a gymnasium,” Holden wrote to Carranza.

But over a year has passed since then, and Carranza did not respond. Only after the Post reached out for comment from City Hall officials did Carranza ask to meet with Holden.

Danielle Filson, a spokeswoman from the New York City Department of Education, told the Daily Caller News Foundation the city has invested $14 million in PS 9 since 2017 to ensure that it is “a safe, clean, and comfortable space for students to learn.”

“The CEO of the School Construction Authority and a Deputy Chancellor visited the school with the Council Member in June 2018, and we are continuing to make improvements to the building,” Filson told the DCNF. The upgrades reportedly include renovations to the structure of the building, to the bathrooms, to the basement and more.

Democratic New York state Rep. Felix Ortiz, a former chair of the Committee on Mental Health and Developmental Disabilities, compared the school conditions to those of a “Dickens novel,” according to the Post.

“When something is brought to the chancellor’s attention — with the letter not being answered — for the sake of the children, you have to act on it,” said Democratic New York state Sen. Joseph Addabbo Jr., according to the Post.

Republican New York City Councilman Joseph Borelli accused Carranza of focusing on diversity initiatives and getting rid of elite city school admission tests instead of assisting the situation at PS 9.

“Perhaps this could take up more of the chancellor’s time than worrying about how many Asian kids are in Stuyvesant,” Borelli said, according to the Post.

1
EXCLUSIVE: Coronavirus Expert Says Virus Could Have Leaked From Wuhan Lab
Investigative Group
2
Left-Wingers Rage At Former Obama Press Secretary Defending Amazon
US
3
USS Roosevelt Sailors Cheer In Support Of Fired Commander As He Exits The Coronavirus-Infected Ship
US
4
One Of The US's Largest Natural Gas Companies Goes Bankrupt. Here's Why Russia Is Partially To Blame
Energy
5
'This Is Not A Time For Politics': Trump Says Pelosi's Coronavirus Committee Is 'A Really Big Waste Of Vital Resources, Time'
Politics