“Don’t like this racial stuff-everybody should just cool it.”

Moments later, CNN’s S.E. Cupp snapped at him, “Way to take a stand.” 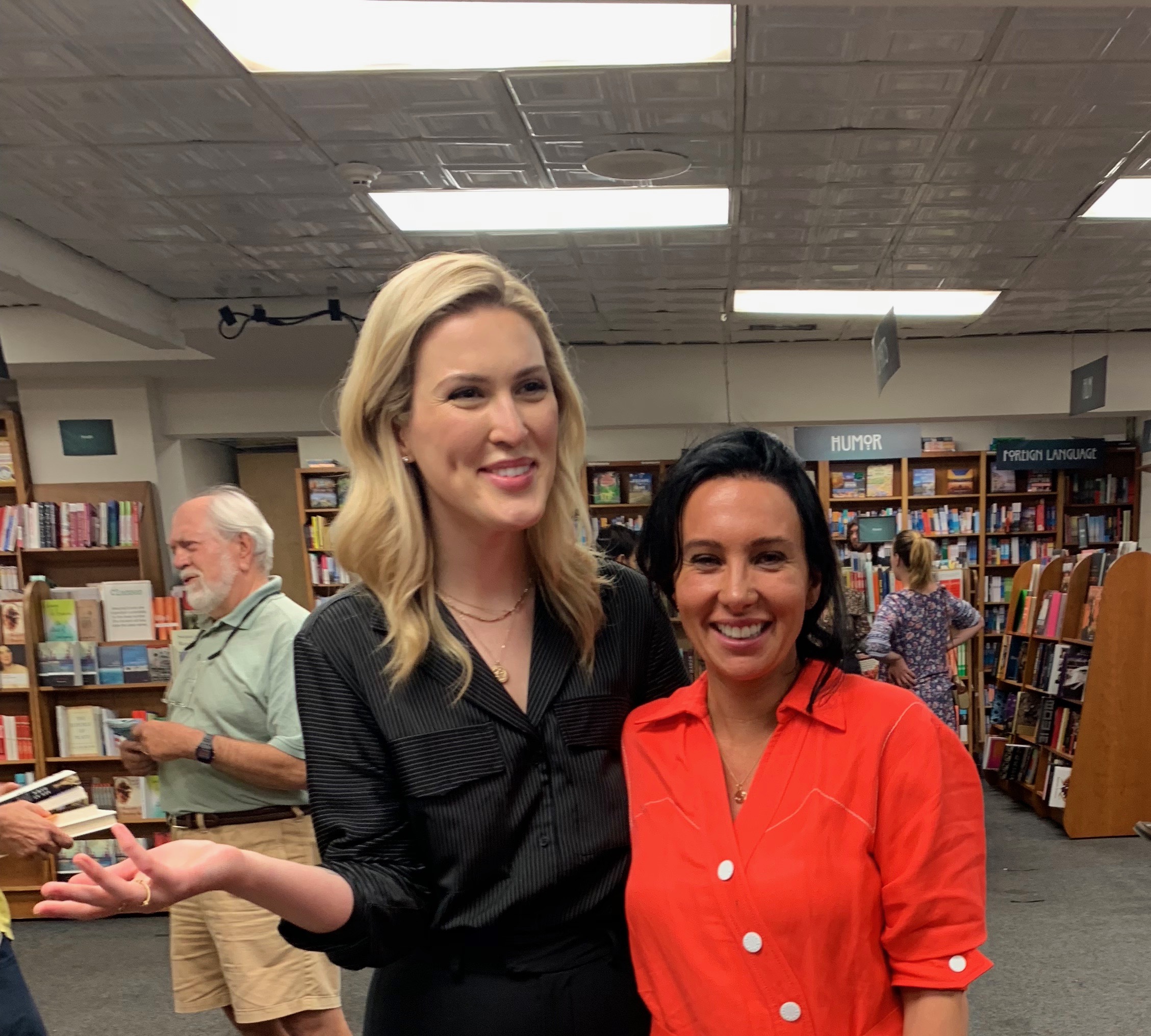 Nuzzi is a correspondent for New York Magazine; Taddeo is the author of a newly released Simon and Schuster book, Three Women. She’s a longtime writer for New York and Esquire Magazines. The book is already becoming a TV series on Showtime.

Just before 7 p.m. Monday night, the upper northwest bookshop was buzzing with female energy. Women in all shapes and sizes and age ranges. There was a smattering of men — mainly seniors — grouching about. Pardon the expression, but it fits here — the place was packed like sardines. In a good way for the author, Lisa Taddeo, whose book, Three Women, hit the shelves on July 9th with a bang. But bad for anyone who enjoys breathing and not having someone else’s thighs on your chair in the dead heat of a swampy Washington summer. I was sandwiched between two larger women — one with orange hair and a lot of tattoos, the other with a colorful hat.

There was a far too lengthy announcement about a tote bag contest, which was torture on a few levels. First, the powers that be wanted you to fill out a survey about how you heard about this event. Do we not have enough survey requests in our lives? Second, this meant you could possibly win a tote bag, of which there is no shortage in Washington. Hard pass on the survey. Can we please have one day, one night, one anything without a tote bag?

Seriously…could Politics & Prose possibly separate the chairs a couple of centimeters to make this whole thing a lot less awful? Nonetheless, the place was packed. So go, Lisa Taddeo, go. Her book is already — clearly — a hit. The day I bought her book at Kramer Books in Washington’s Dupont Circle neighborhood a few weeks ago, I could hear other women going up to the clerks, nearly whispering, “Do you have Three Women?”

The project was not simple or easy. It took Taddeo eight years to find three women willing to let her into every crevice of their lives, more specifically their sex lives. Even more specifically, their thoughts about desire that punched on topics like cheating, molestation, gang rape and a husband getting off by watching his wife have sex with other men and women. Taddeo even moved to their states for months and years at a time to get to the bottom of their lives. Each woman’s story is intense. Two are pseudonyms, one is the real deal since her story was in the courts and the newspaper.

Nuzzi was a few minutes tardy. “My train was late,” she sheepishly told the crowd as she slipped into the interview about 10 minutes after it began. Taddeo jumped right in with a reading and stories about her book. She’s not shy and later admitted to Nuzzi that she lives with a ton of anxiety. She literally popped in the crowd — her pitch black smooth hair pulled back into a messy ponytail against a bright orange, nearly fluorescent short-sleeve, above-the knee summery dress with big white buttons. Her outfit was punctuated by black tortoise shell glasses. In her nose, a silver piercing. On her feet, chic camel heeled clogs.

One graying man in a pale yellow T-shirt and shorts sitting on the floor was none too pleased by Nuzzi’s arrival.

“Can you finish your story?” he groused at Taddeo, who was in the middle of a story about Maggie, one of the women in her book who had been in an alleged sexual  relationship with her high school teacher.

The tattooed woman next to me shook her head, rolled her eyes and laughed, entirely annoyed by the man’s rudeness.

Taddeo tried to appease him a little. But the interview began.

Nuzzi asked for a one-line description of her book.

“It’s about what women do want as opposed to what they don’t,” Taddeo replied.

Nuzzi: “How do you know when you’re done?”

Taddeo: “When the money runs out?”

Taddeo explained that at a certain point it became clear that the book was just going to be about women. But it took plenty of interviewing and weeding a lot of people out to reach that conclusion. The author said it took her a year and two years living in Indiana to find Lina. She posted flyers in various unheard of places around the country. She had plenty of sex addicts calling her wanting to tell their stories and maybe wanting help.

Nuzzi wanted to know how many crazy people called her versus normal. Taddeo imagined the percentage was about 70:30 crazy people to normal women with real stories to tell.

The author said the hardest part was getting people to trust her. But the topics came easily.

“Desire and grief are the only things I’ve ever wanted to write about,” she said.

What also wasn’t hard for Taddeo was getting lost in another person.

Nuzzi admitted to Taddeo that at times “it was a burden to be in their heads. I had to put the book down sometimes. That’s a compliment, by the way.”

Taddeo admitted, “I have such a wild amount of anxiety that listening is helpful. I was OK with losing myself.”

Taddeo doesn’t see her female subjects as victims, despite so many hard things happening to each of them. Rather, she sees them as women who wanted to be heard and women who “just talked from their hearts.” She said wondering whether people will say anything bad about them keeps her up at night.

More than once, Taddeo  called it the “perfect storm” of her wanting to find them as them needing to find her.

Nuzzi asked if strangers have been telling her their stories as the result of Three Women.

The Q & A portion of the appearance involved men marching up to the microphone and spewing weirdness. One older guy who clearly hadn’t read the book held up a different book, talked about his girlfriend and asked a meandering question about the female orgasm. Another ruminated about Freud.

“I think the penalty for making a comment instead of asking a question during a Q & A should be death by shark,” Nuzzi told The Mirror.

“In Feb I got sick and ended up in the hospital for 48 hours. I took an Uber there b/c I was scared of ambulance charges. Finally got the bill for my stay and it’s $47,103.18. Thank god I have insurance, but there’s till thousands of dollars in charges that they’re not covering.” — Taylor Lorenz, staff writer, The Atlantic.

“I keep getting DM’s asking me if I’m ok.  Truth is…I’m feeling hopeless. Mass shootings. Corruption. Lies. Racism. Xenophobia.
Crimes Against Humanity. And the Republican Party is not standing up to the tyranny. It’s a lot.” — Alyssa Milano, Democratic activist, actress.

“After 4+ years and over 2 cycles, I’m sad to say that I won’t be on the DCCC team after today. We had strategic disagreements, but I wish them the best of luck and know that they will hold onto the House that we fought so hard to win in 2018.” — Molly Ritner.

Al Sharpton fires back at Trump

“Trump says I’m a troublemaker & con man. I do make trouble for bigots. If he really thought I was a con man he would want me in his cabinet.” — The Rev. Al Sharpton, MSNBC.

Joe Scarborough thanks Jesus for his friendship with Sharpton

“Thanks to those reminding me of how stridently Al Sharpton and I opposed each other 20 years ago. We take pride in our friendship today because of that history, recognizing Jesus’s words that all have fallen short of God’s glory and we should forgive each others 70 x 7 times.” — Joe Scarborough, MSNBC co-host, “Morning Joe.” (RELATED: Scarborough Asks Jesus To Forgive Him For Ever Being A Republican)