The Democratic debate Tuesday night proved to be the last stand for the moderates in the party who believe promises of free stuff are a one-way ticket to defeat by President Donald Trump in 2020.

The debate started more like a sporting event than a political war of words, as CNN introduced each candidate one at a time with a special graphic and a dramatic walkout. There were no questions asked of the candidates before the first break, and CNN instead used that time to present the U.S. colors and a choral rendition of the Star Spangled Banner, during which each candidate stood with hands over their hearts.

The introduction was an appropriate foreshadowing of the boxing match that played out between moderates and progressives over policy and the larger direction of the Democratic Party.

For the moderate Democrats on the stage who are polling at or below 1% — namely former Maryland Rep. John Delaney, Minnesota Sen. Amy Klobuchar, Montana Gov. Steve Bullock, former Colorado Gov. John Hickenlooper, and Ohio Rep. Tim Ryan — Tuesday’s debate was perhaps their last chance to make their case to voters on the major issues.

Delaney took up the moderate mantle by using his opening statements to rip Vermont Sen. Bernie Sanders and Massachusetts Sen. Elizabeth Warren for promising “free everything,” citing Medicare-for-all as a plan that will help President Donald Trump get reelected. (RELATED: Elizabeth Warren Throws Down With John Delaney Over ‘Impossible Promises’)

Klobuchar made a similar dig at her progressive colleagues but did not call them out by name, instead touting her own “bold ideas” that, unlike others on the stage, are “grounded in reality.”

CNN followed Delaney’s lead, kicking off the debate with a health care discussion and asking Sen. Bernie Sanders, whose Medicare-for-all plan would eliminate private insurance, cover illegal immigrants, and raise taxes on the middle class, how he responds to Delaney’s criticisms.

Delaney refused to back down against the self-avowed Democratic socialist, warning that Democrats cannot be the “party of subtraction” by refusing to allow Americans the choice of having private insurance.

“They’re running on telling half the country that your insurance is illegal,” Delaney asserted.

However, his critiques seemed to fall on deaf ears, as Warren garnered major applause from the audience when she shot back that only Republicans are the party of taking insurance away from people. 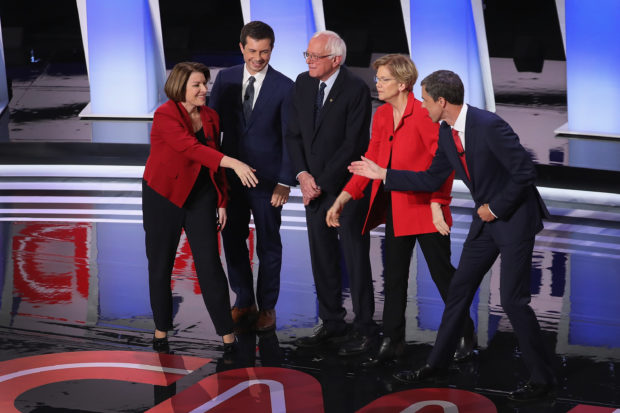 Americans should “have the right to make a decision” regarding their health care, Hickenlooper argued.

Ryan agreed that it is untenable for the Democrats to “tell those union members … that they’re going to lose their health care.”

Meanwhile, Warren refused to admit that her plan would likely require tax increases on the middle class — something Sanders admits — instead stating only that “overall costs” would decrease.

Delaney also warned about the consequences of paying Medicare rates for all health care, insisting that many hospitals will close as a result.

“Why do we have to be so extreme?” Delaney guffawed. “Why can’t we give them all health care as a right [and give them a choice]?”

Bullock slammed such proposals as “detached from people’s lives” and warned that Democrats will further incentivize illegal immigration and make the current flood of migrants at the southern border even worse.

Ryan agreed with a resounding “yes” when asked if Sanders’ proposal to gift illegal immigrants with health care would incentivize border crossings, arguing, “If you want to come in you should at least ring the door bell.”

Sanders’ Medicare-for-all proposal is already estimated to cost trillions of dollars over the next decade, and those costs would certainly skyrocket even higher if the plan also applied to the more than 11 million illegal immigrants present in the U.S.

“Health care is a human right…that applies to everyone in this country,” Sanders responded to criticism of his immigration proposals.

The public is with Bullock and Ryan on immigration: just 33% support insurance for illegal aliens and 27% support decriminalizing border crossings.

The debate quickly turned to the broader theme of centrism versus radical liberalism, as the moderators asked the participants to discuss the party’s move toward socialism and whether it’s an appropriate strategy to defeat Trump. The line of questioning was red meat for the low-polling moderates who were itching for a chance to separate themselves from their progressive opponents.

However, it also gave the Democrats on stage who embrace socialistic policies to rally the crowd to their side.

“Don’t let extremes give Trump four more years,” Hickenlooper warned, as Sanders shot back, “Every credible poll that I have seen has me beating Donald Trump, including the battleground states of Michigan … Wisconsin … and Pennsylvania.”

Sanders also refused to label his health care plan “radical,” instead stating, ‘this is what virtually every other country on Earth does.” 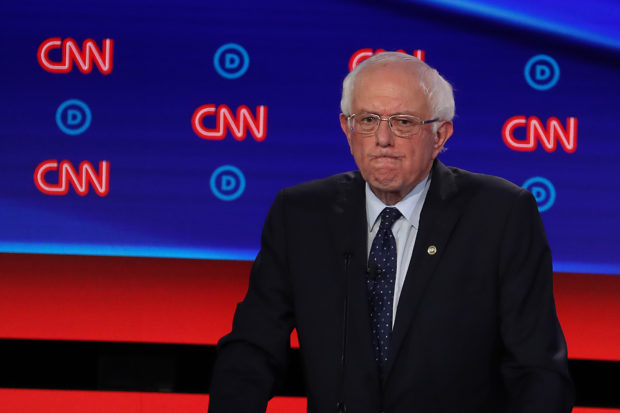 “We can’t choose a candidate we don’t believe in just because we are too scared to do anything else,” Warren echoed.

Ryan brushed aside Sanders’ polling, however, noting, “Hillary Clinton was winning in the polls too.”

“We win when we run on things that make sense,” Delaney said of the socialistic trend. “Focus on those kitchen table, pocketbook issues”

But Delaney’s warning teed up Warren for one of her biggest applause lines of the night:

“I don’t understand why anyone goes through the trouble of running for president just to talk about what we can’t do.”

Meanwhile, the Trump campaign is capitalizing on the Democratic Party’s move to socialism, telling Americans that Democrats will destroy the economic and manufacturing gains made under this president. A majority of Democrats say they view socialism favorably, but capitalism is still far more popular among all Americans.

A number of 2020 Democratic candidates have signed onto the Green New Deal, a sweeping plan that makes sweeping changes to the U.S. economy and is estimated to cost American families $70,000 in its first year.

“It’s not realistic,” Delaney said of the Green New Deal, while Ryan warned that certain climate plans will harm manufacturing jobs in places like his state of Ohio.

“Far too many communities are being left behind as we make this transition,” Bullock agreed, calling many Democratic proposals on the climate “plans that are written for press releases that will go nowhere else.”

In response to those concerns, Sanders called himself the most pro-worker candidate on the stage. His assertion, however, belies the views of the AFL-CIO, which stands starkly opposed to the Green New Deal.

“We will not stand by and allow threats to our members’ jobs and their families’ standard of living go unanswered,” Cecil Roberts, president of the United Mine Workers of America, and Lonnie Stephenson, president of the International Brotherhood of Electrical Workers, wrote in March.

Other climate proposals beyond the Green New Deal would similarly threaten American workers. Mandating a small increase in renewable energy use “leads to substantial increases in electricity prices that mirror the program’s increasing stringency over time,” the University of Chicago found.

The Democrats also battled on issues like free college — which Klobuchar warned would disproportionately assist wealthy students — and reparations — which even Sanders was reluctant to endorse, while Marianne Williamson called for $200 to $500 billion for cash payments to descendants of slaves. 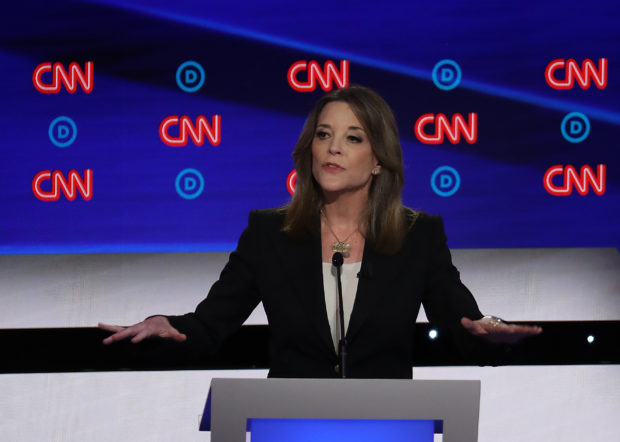 Williamson herself best summarized the new face of the party, declaring about the moderates on stage, “I wonder why you’re Democrats. You seem to think there’s something wrong with using the instruments of government to help people.”

Indeed, while the moderates urged a step back from the rush to a socialistic America and try to embrace the blue collar Americans who left the party of Obama to vote for Trump in 2016 — a position backed up by nationwide polling and Trump’s economic results — their opponents repeatedly beat them into submission with the support of the CNN audience and their higher polling among Democratic primary voters.