Last weekend, the president got bored and decided to see if he could make Democrats defend one of the most dangerous, mismanaged places in the country. And of course, he could. It wasn’t hard. He just sent a flurry of tweets criticizing the city of Baltimore and Rep. Elijah Cummings. The president called Baltimore a “disgusting, rat and rodent-invested” hellhole, a “corrupt mess” that “no human being” would want to live in.

A lot of people who’ve never been to Baltimore claimed to be deeply offended by those remarks. One person who seemed to agree with them was former Baltimore Mayor Catherine Pugh. Just last year, she said things were so bad you could smell the rotting rats.

The mayor did not explain why she hadn’t cleaned things up. That footage of her remarks got almost no attention when it ran on a local news station. Neither did the story from just 10 days ago about Baltimore’s deputy policy commissioner getting robbed at gunpoint by four thugs while out to dinner with his wife. People weren’t talking about that over dinner in Georgetown this weekend.

If there’s one thing that virtually everyone in Washington aggressively doesn’t care about, it’s Baltimore. It’s 40 miles and an entire world away. You could live your whole life in D.C. and never visit or think about Baltimore. (RELATED: Elijah Cummings Said Some Very Trumpian Things About Baltimore In 1999)

Then, last weekend, orange Mussolini weighed in on the subject, and suddenly Baltimore became holy ground, a sacred city of light that only an infidel would disparage. An infidel or, perhaps — and this will not surprise you — a racist. Because honestly, only a hardened bigot would criticize a place as awesome as Baltimore. That was the media consensus over the weekend. 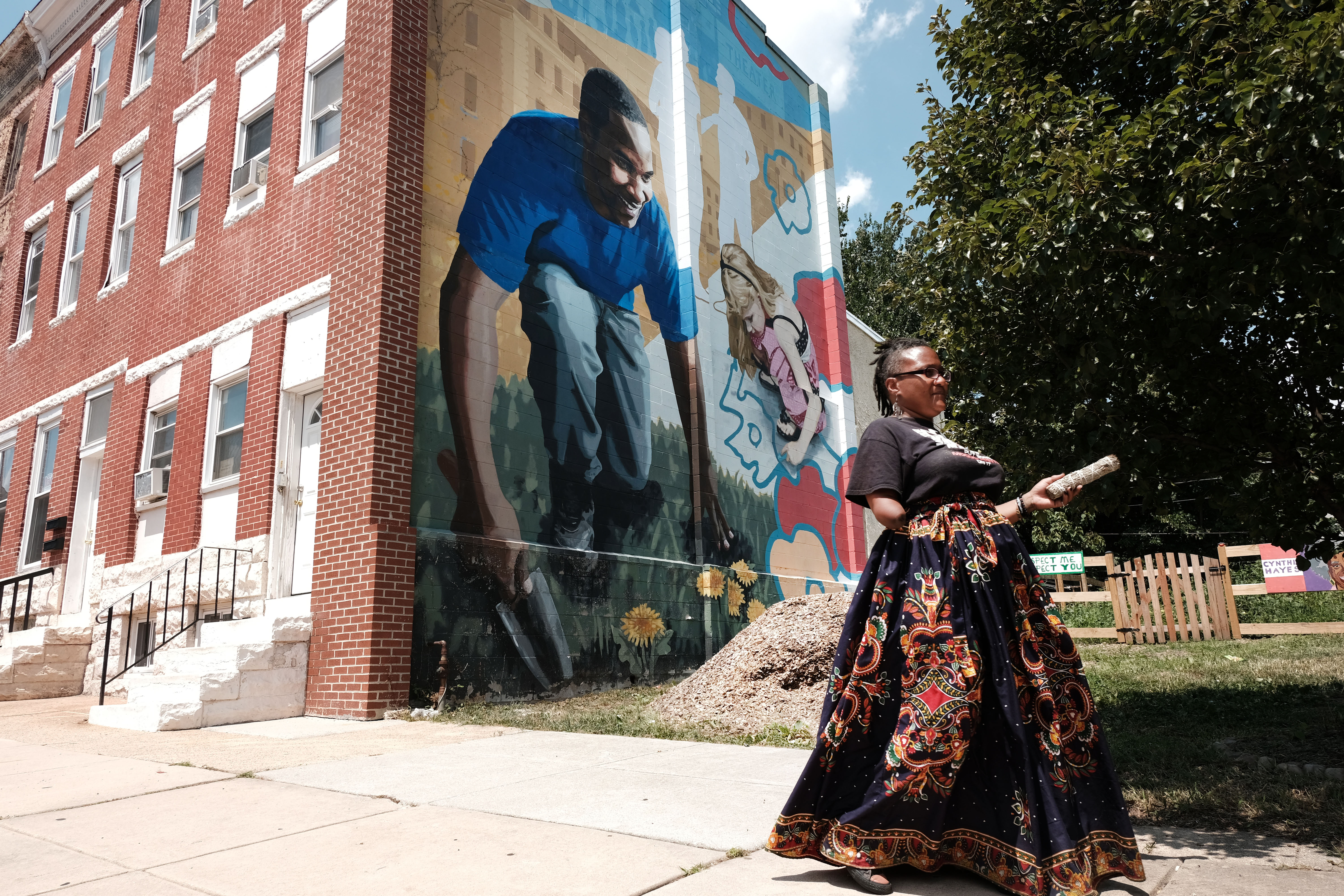 BALTIMORE, MARYLAND – JULY 28: Activist Erricka Bridgeford of Baltimore Ceasefire participates in a “sacred space” ritual near where a person was recently murdered on July 28, 2019 in Baltimore, Maryland. Members of the activist group got to the scenes of murders to pray, burn sage and to create a “sacred space” for the victim. President Donald Trump has recently drawn criticism by calling the city of Baltimore “disgusting.” While the struggling city has a number of affluent areas, it has a stubborn crime problem and has one of the highest murder rates in the nation for a city of any size. (Photo by Spencer Platt/Getty Images)

Republicans still get red in the face when CNN calls them racist, but they shouldn’t. The whole thing is a campaign tactic, dreamed up by the Democratic National Committee. Once the Russia conspiracy imploded, Democrats and their lackeys in the media moved to the only other message they have: “Shut up, racist.” It didn’t work in 2016 for Hillary Clinton, but they’re hopeful it will this time. We’ll see.

Meanwhile, Baltimore — the actual city, not the metaphor — could desperately use some attention. If anything, Trump’s tweets underplayed the crisis. Last year, the city recorded 309 homicides, a rate of more than 50 per 100,000 people. If Baltimore were a country, it would have the fourth-highest murder rate in the world, barely below Venezuela. (RELATED: Alveda King: On Baltimore, Trump Is ‘Simply Saying Your Communities Need To Be Fixed’)

Or think of it this way: Last week, the left denounced President Trump for reaching a deal with Guatemala that declares the country a “safe” location for asylum seekers. Guatemala, they said, has too much crime and too many gangs to be considered safe. Making people stay there is a human rights violation. And yet Baltimore’s murder rate is double that of Guatemala. In almost any way that a city can be a disaster, Baltimore qualifies. More than 22% of the city lives in poverty. Almost 65% of children grow up in single-parent households. The schools are a catastrophe. In 2017, one-third of Baltimore’s high schools had zero students proficient in math. That’s right. In 13 of Baltimore’s 39 high schools, not a single student — not one — was proficient at math. You’d think that would be a national scandal.

Bernie Sanders visited Baltimore a few years ago, and to his credit, he was shocked. Sanders said: “Anyone who took the walk that we took around this neighborhood would not think you’re in a wealthy nation. You would think that you were in a Third World country.” 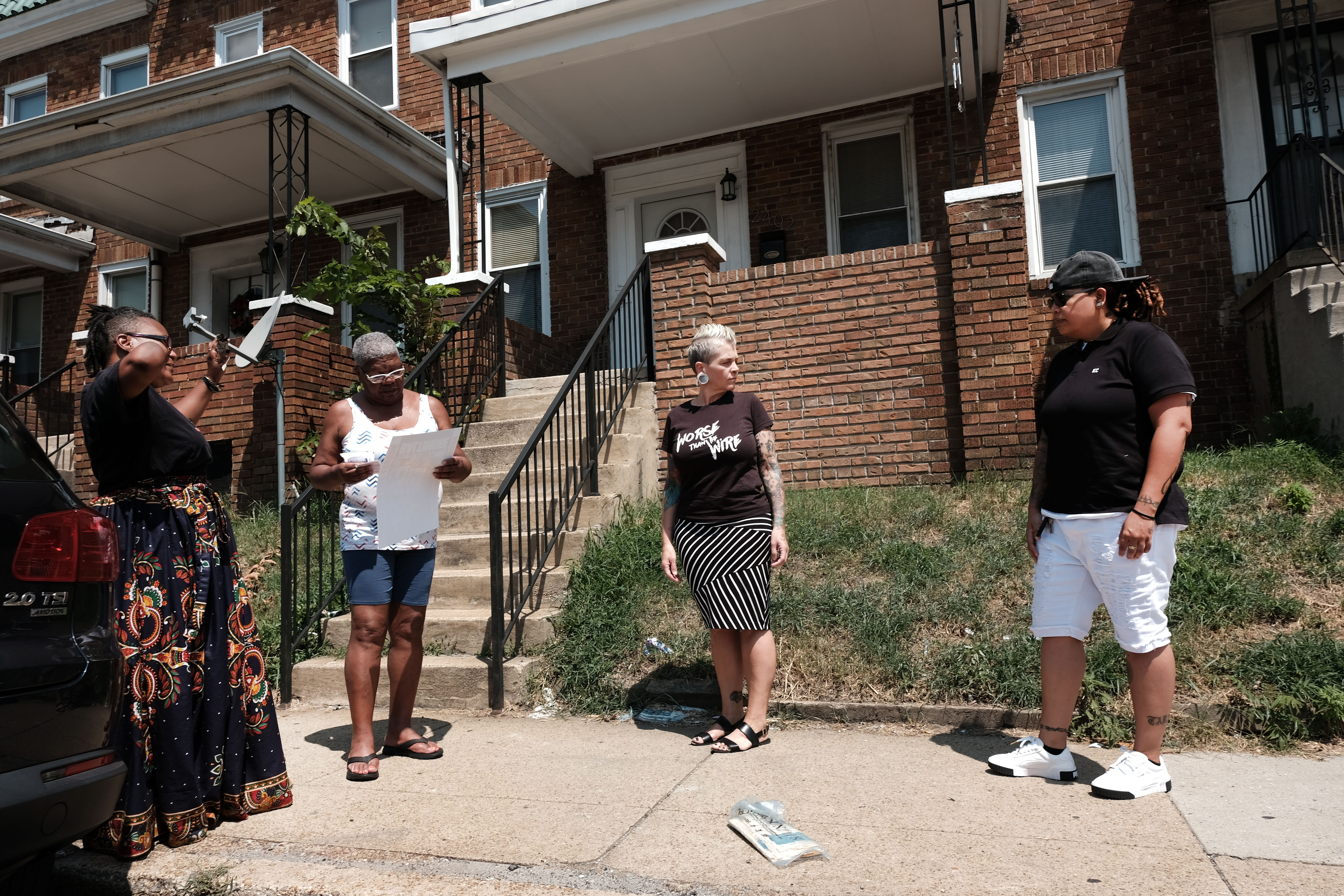 BALTIMORE, MARYLAND – JULY 28: Baltimore Ceasefire members participate in a “sacred space” ritual near where a person was recently murdered on July 28, 2019 in Baltimore, Maryland. Members of the activist group got to the scenes of murders to pray, burn sage and to create a “sacred space” for the victim. President Donald Trump has recently drawn criticism by calling the city of Baltimore “disgusting.” While the struggling city has a number of affluent areas, it has a stubborn crime problem and has one of the highest murder rates in the nation for a city of any size. (Photo by Spencer Platt/Getty Images)

Looks like Bernie must be a white supremacist. Actually, he’s just an old-fashioned liberal. That’s how Democrats used to think. If they saw misery and urban decay, they wanted to fix it. Modern progressives are different. Progressivism isn’t about helping the people beneath you; it’s about establishing moral superiority over them. Democrats support the status quo in Baltimore. It doesn’t bother them. That’s not surprising. They created modern Baltimore. The city hasn’t had a Republican mayor in more than 50 years.

Things really began to fall apart after the 2015 riots. The Obama administration imposed a consent decree on the city’s police department that radically restricted its ability to protect citizens. Not surprisingly, crime exploded. Cummings, by the way, praised that consent decree. He’s very much part of the problem. From her taxpayer-funded vacation in Italy, House Speaker Nancy Pelosi defended Cummings — and Baltimore. Pelosi grew up in the city. Both her father and her brother were mayors of Baltimore. But like most rich progressives, Pelosi herself is long gone. She’s got a winery in Napa now. She’s not interested in going back to Baltimore. It’s easier to just lecture other people about it. Most Democrats feel that way.

Tucker Carlson and Neil Patel co-founded The Daily Caller, one of America’s fastest growing online news outlets, which regularly breaks news and distributes it to over 15 million monthly readers. Carlson and Patel also co-founded The Daily Caller News Foundation, a nonprofit news company that trains journalists, produces fact-checks and conducts longer-term investigative reporting. The Daily Caller News Foundation licenses its content free of charge to over 300 news outlets, reaching potentially hundreds of millions of people per month. To find out more about Tucker Carlson and Neil Patel and read features by other Creators Syndicate writers and cartoonists, visit the Creators Syndicate website at www.creators.com. Copyright 2019 Creators.com