The sister of a couple killed in Saturday’s shooting in El Paso, Texas is outraged over the “pure evil” exhibited by Democratic politicians who refused to welcome President Donald Trump to the city.

Trump plans Wednesday to visit both El Paso and Dayton, Ohio in the wake of tragic shootings in both cities. While there, the president wants to pass on condolences to those affected as well as praise to the first responders. Trump condemned the white supremacy behind the El Paso attack in a televised address Monday.

Andre and Jordan Anchondo were just two of the 22 people killed at the Walmart shooting. They died while protecting their infant child from the bullets. Supporters have established a GoFundMe campaign to raise money to care for the couple’s three orphaned children. (RELATED: Trump Condemns White Supremacy After Shootings In El Paso, Texas And Dayton, Ohio)

Vibora (Deborah) Anchondo, Andre Anchondo’s sister, posted an emotional appeal Tuesday on Facebook, telling the “pure evil” Democratic politicians who have repeatedly told the media that Trump is not welcome in the community to eschew politics not to transform a tragic event “into a political issue.”

“It’s such a shame that two of our local politicians (I refuse to say their names as they don’t deserve it) are saying that our President is not welcome on Wednesday,” Anchondo wrote on Facebook. “I cannot believe how these monsters are using the tragic event to push their political agenda.”

“I lost my brother and sister-in-law on Saturday. My family and I are living a horrible nightmare. The visit from our President will be more than comforting to my family. He will not be here for a political agenda. The two monsters from El Paso, who do not deserve to be mentioned by name nor even the nicknames I have for them, are just pure evil. My brother’s body was still laying at Walmart on Saturday night when they decided to make this into a political issue and push their agenda by blaming our President for this. Rather than focusing on the situation and the individual who destroyed the lives of many, these evil people selfishly turned this into a political war. I’m equally as angered by those two as I am with the person who took my brother and his wife from me, typing this I think I feel more animosity towards those two evil politicians.” – Deborah

Several Texas Democrats who are blaming Trump for the for shooting because of his comments on illegal immigration say Trump has no business coming to El Paso. (RELATED: Booker Demanded That Trump Condemn White Supremacists, Then Got Angry When He Did) 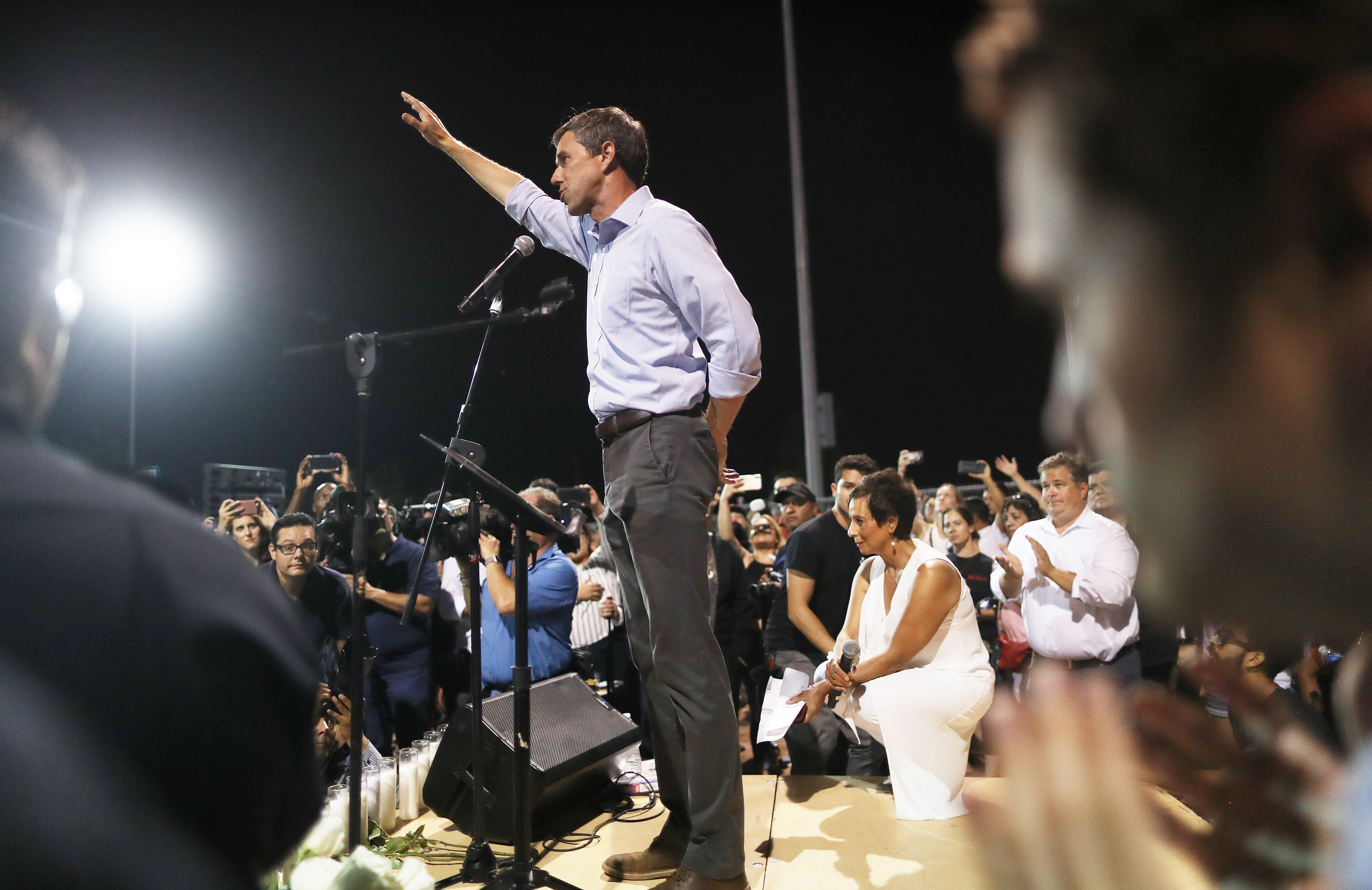 Democratic presidential candidate, former Rep. Beto O’Rourke speaks to the crowd at an interfaith vigil for victims of a mass shooting, which left at least 20 people dead, on Aug. 4, 2019 in El Paso, Texas. (Mario Tama/Getty Images)

Former Texas Congressman and Democratic presidential candidate Beto O’Rourke has repeatedly said in both television interviews and on his Twitter account that Trump is responsible for the massacre. Early Wednesday, he tweeted again that “22 people in my hometown are dead after an act of terror inspired by your racism. El Paso will not be quiet and neither will I.”

22 people in my hometown are dead after an act of terror inspired by your racism. El Paso will not be quiet and neither will I. https://t.co/dakFPKj0vJ

Texas Democratic Rep. Veronica Escobar, whose congressional district includes El Paso, said Monday that Trump “is not welcome” in the aftermath of the tragedy.

“It is shocking to me that [President Trump] is so utterly self-aware, and this is why, from my perspective, he is not welcome here. He should not come here while we are in mourning,” she told MSNBC’s “Morning Joe” program.

Escobar further told CNN Tuesday that she refused an invitation from the White House to stand with the president in El Paso.. “I declined the invitation because I refuse to be an accessory to his visit,” said Escobar. “I refuse to join without a dialogue about the pain his racist and hateful words & actions have caused our community and country.”