The Department of Homeland Security (DHS) announced Monday that apprehensions of illegal aliens on the southern U.S. border decreased 22% between July and August, a sign that the agency believes is proof that President Donald Trump’s immigration policies are working.

DHS reported just over 64,000 apprehensions in August, down from 82,000 in July. The data also shows a 56% reduction of apprehensions by border agents since May, when such illegal crossings reached a peak of 144,000 migrants. (RELATED: Illegal Border Crossings Projected To Fall After Trump Tariff Threat Against Mexico)

Further, family units and unaccompanied minor apprehensions declined more significantly than single adults, senior administration officials familiar with the numbers told the Daily Caller. Family units dropped to 55% of total apprehensions, whereas earlier in the year they were closer to 70%.

The officials also noted that apprehensions of migrants from Central America fell at an even faster rate than the 56% reduction from May to August. Central American families have made up the bulk of the border crisis over the past year.

Officials point to the administration’s work with Mexico as the “largest driver” of the reduction in illegal crossings, as many of the family units traverse through Mexico from Guatemala and Honduras and then claim asylum in the U.S. 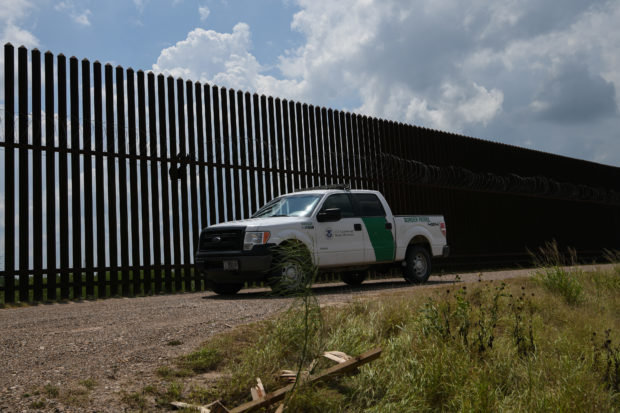 A US Border Patrol vehicle drives along a section of border fence near the US-Mexico border on June 12, 2019, in Hidalgo, Texas. (Photo by Loren ELLIOTT / AFP)

Trump seemed to prompt Mexico into action in May, threatening to place a 5% tariff on all Mexican goods if they did not assist in stemming the flow of illegal aliens to the U.S. border. Mexico responded by promising to deploy National Guard troops to its own southern border and to reform its asylum process.

Mexico is also working to shut down the transportation routes used by human smugglers, effectively destroying the trend of large caravans marching up to the U.S. border. In May, officials said they encountered 48 large caravans of migrants, compared to just 6 in August.

The Migrant Protection Protocols (MPP) program — known colloquially as “Remain in Mexico” — is also allegedly de-incentivizing economically-driven migrants from claiming asylum at the border. Instead of these asylum seekers being released into the U.S. while they await court proceedings, they are returned to wait in Mexico, stemming what the president calls the “catch and release” of migrants. (RELATED: Attorney General Bill Barr Cracks Down On Catch And Release For Asylum Seekers)

Once these asylum seekers are relocated to Mexico, they are offered work permits and free transportation back to their home countries. As a result, border officials are seeing a larger number of individuals voluntarily returning home instead of completing the asylum process. 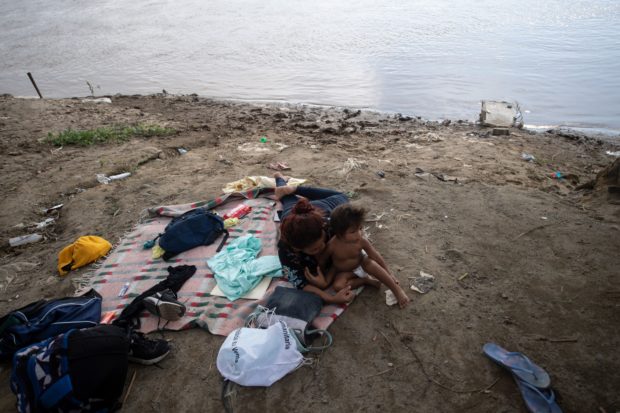 A Honduran woman and her daughter await in Tecun Uman, Guatemala, to cross to Ciudad Hidalgo, Mexico, on June 7, 2019. – The United States warned Friday that President Donald Trump’s punitive tariffs on imports from Mexico were on course to take effect next week, despite headway in talks on stemming the surge in migration towards the US border. (Photo by PEDRO PARDO/AFP/Getty Images)

“We put a strategy down for the president in April. He said, ‘I want to end catch and release, I want these numbers down, I want the wall built.’ Those are the three things he told me. We are advancing dramatically in all three areas,” McAleenan said.

However, he added that the president is not fully satisfied with the August reduction in apprehensions.

“The president expects a further decrease,” McAleenan said, explaining that DHS hopes to get back to spring 2017 levels, when apprehensions averaged 20,000 or less between April and June.

Officials acknowledged that there are seasonal changes affecting border crossings — migrants tend to come to the U.S. at higher rates in the summer when the weather is more amenable to the trek — but pointed out that the decrease this summer is significantly higher than in previous years. Apprehensions between July and August historically fall about 8-10%, compared to 22% this year.

DHS stressed that while the August numbers are a sign of progress, they still believe the situation at the border constitutes a crisis. Overall apprehensions are still at 800,000 on the year, a 129% increase from 2018.

“We are not out of the woods,” acting CBP Commissioner Mark Morgan explained to the Caller, calling on Congress to take up the torch.

“The incredible work that’s being done is a game changer, but make no mistake — for this to be a durable, lasting, positive impact to address this crisis, Congress has to act,” Morgan asserted. “They have to pass meaningful legislation that we’ve been telling them for a long time that we need to do to effectively address the loopholes in our current legal framework.”