A federal trial judge in New York City dismissed the case in December 2017 for lack of standing, saying the plaintiffs — a group of hoteliers and restaurant owners joined by the watchdog group Citizens for Responsibility and Ethics in Washington (CREW) — could not attribute declines in business to post-election interest in Trump properties. On appeal, the 2nd Circuit said the trial court had asked the plaintiffs to prove too much too early in the dispute.

“The district court demanded too much at the pleading stage by requiring allegations that dispel alternative possible explanations for plaintiffs’ injury,” Judge Pierre Leval wrote for a 2-1 panel. “In so doing, the district court effectively required plaintiffs to prove, pre-discovery, the facts necessary to win at trial. This was error.”

The decision creates the prospect of Supreme Court review, as the 4th U.S. Circuit Court of Appeals sided with Trump in a similar dispute brought by the attorneys general of Maryland and Washington, D.C., concerning the Trump International Hotel on Pennsylvania Avenue. The justices generally take cases in which multiple courts disagree about the same questions of law. The full 4th Circuit is currently considering whether to review that decision.

The New York plaintiffs brought their case under the Constitution’s emoluments clauses, which prohibit the president from accepting “any present, Emolument, Office, or Title” from foreign or domestic governments without congressional authorization.

Trump did not divest of his business holdings when he became president. Though he turned day-to-day operations over to his children and established a trust for his assets, the president retained ownership over many of his business interests. As such, the plaintiffs claim they have lost business as foreign emissaries and domestic political actors flock to Trump properties in a bid to curry favor with the administration.

The 2nd Circuit said the lawsuit could proceed under a theory of competitor standing. That means the plaintiffs will have a chance to prove that Trump’s allegedly unlawful conduct directly harms their ability to attract patrons.

“Plaintiffs have plausibly pleaded that the president’s ownership of hospitality businesses that compete with them will induce government patrons of the hospitality industry to favor Trump businesses over those of the plaintiffs so as to secure favorable governmental action from the president and executive branch,” Leval wrote.

“This unlawful market skew directly affects plaintiffs’ revenue and profits: every dollar of government patronage drawn to Trump establishments by the hope of currying favor with the president is a lost dollar of revenue that might otherwise have gone to plaintiffs,” the decision reads elsewhere. (RELATED: Supreme Court Let’s New Trump Asylum Restrictions Take Effect) 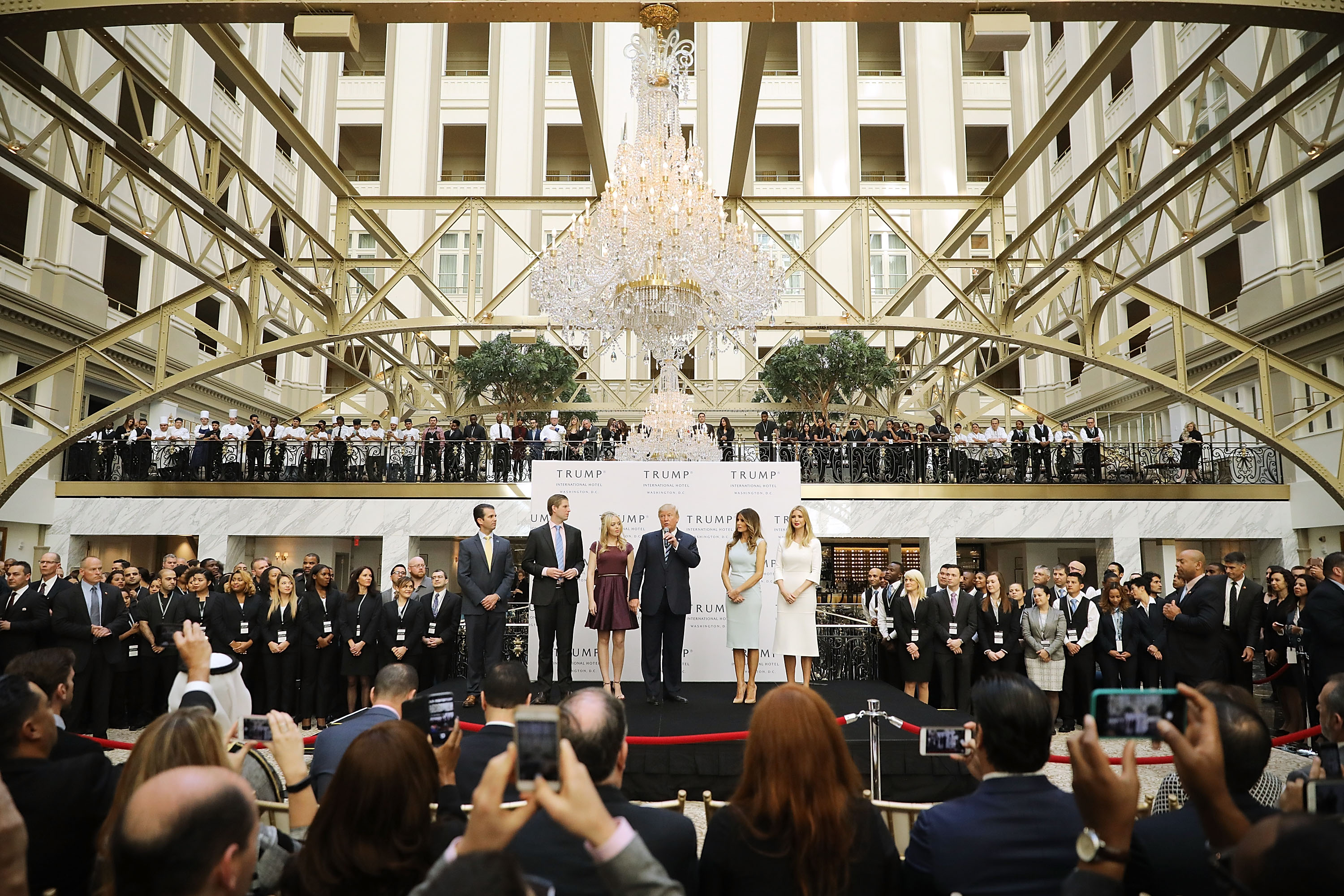 President Donald Trump and his family cut the ribbon at the new Trump International Hotel in Washington, D.C. on October 26, 2016. (Chip Somodevilla/Getty Images)

The president’s lawyers counter that the plaintiffs’ theory rests on a “speculative chain of possibilities,” warranting dismissal of the lawsuit. In dissent, Judge John Walker agreed, noting a whole range of factors effect consumer behavior like name recognition or reputation for quality.

“The plaintiffs’ and the president’s establishments exist in a virtual sea of luxury hotels and restaurants in which many different factors influence decision making and freely affect competition,” Walker wrote. “There are simply too many variables at play to allow the plaintiffs to rest solely on the bare assertion that the President’s acceptance of emoluments has caused them competitive injury.”

The 2nd Circuit’s decision is also significant because it moves the litigation closer to a fact-finding phase which could offer significant visibility on Trump family finances and business practices.