One of the chief proponents urging the Trump administration to use big tech companies to collect data on users who could potentially conduct violent actions is a former NBC executive and long-time friend of President Donald Trump.

Ivanka Trump asked people pushing for the new agency if it could prevent mass shootings, one person familiar with the conversations who spoke on anonymity because off the sensitive details told The Washington Post on Sept. 9. Her questions came after the shootings in El Paso, Texas, and Dayton, Ohio.

HARPA would develop “breakthrough technologies with high specificity and sensitivity for early diagnosis of neuropsychiatric violence,” according to a copy of the proposal. “A multi-modality solution, along with real-time data analytics, is needed to achieve such an accurate diagnosis.” 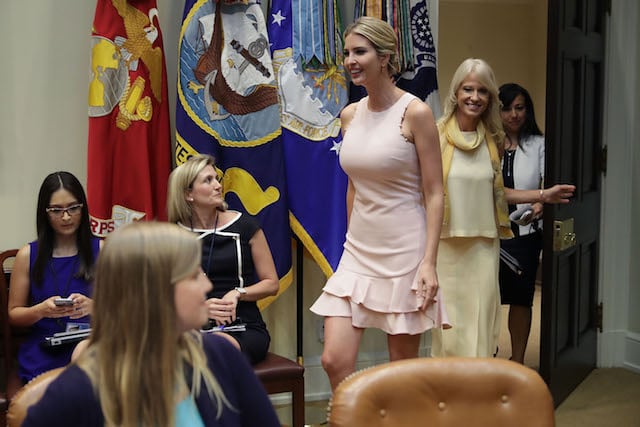 The document notes that such data collection would be up to new forms of technology, including Apple Watches, Amazon Echo and Google Home. Geoffrey Ling, the lead scientific adviser on HARPA, told reporters in August that the plan would require enormous amounts of data and “scientific rigor.”

“To those who say this is a half-baked idea, I would say, ‘What’s your idea? What are you doing about this?'” said Ling, who served as the Founding Director of the Defense Advanced Research Projects Agency from 2014 to 2016. DARPA helps the Pentagon develop technology to solve complex problems.

Ling did not respond to the Daily Caller News Foundation’s request for comment about the nature of the program and whether it could be abused.

Trump has a close personal relationship with Wright, who founded the Suzanne Wright Foundation after his wife died from pancreatic cancer. Wright, a former chair of NBC who worked at the channel when Trump headlined “The Apprentice,” was a supporter of the president’s 2016 successful White House run.

Wright has not responded to the DCNF’s request for comment through his charity, AutismSpeaks. The White House has also repeatedly declined to comment on this story.

“I would love if some new technology suddenly came along that would help us identify violent risk, but there’s so many things about this idea of predicting violence that doesn’t make sense,” Marisa Randazzo, former chief research psychologist for the U.S. Secret Service, told reporters.

FILE PHOTO: The logos of Amazon, Apple, Facebook and Google are seen in a combination photo from Reuters files. REUTERS/File Photo

Such a program would probably flag tens, or hundreds of thousands, more possible suspects than actual shooters, Randazzo noted, adding that there’s a high possibility of false-positives. It would be difficult to determine which people really were at risk of acting violently and which were merely citizens, she added.

Facebook, for instance, has faced criticisms of censoring conservatives, though some Democrats are also dinging the Silicon Valley giant. Democratic Massachusetts Sen. Elizabeth Warren, for one, has advocated for breaking up what she believes is Facebook and Amazon’s monopoly.

Conservatives meanwhile have hammered the company during the past few years over concerns related to censorship. Some tech analysts argue evidence of Facebook censorship are actually examples of the big tech company’s algorithms suffering false-positives.

Emily Williams, a data scientist and researcher based in California, believes Facebook’s algorithm likely has a 70 percent success rate, meaning roughly 30 percent of the time moderators are nixing conservatives who are sharing provocative content but not prohibitive content. In short, the company’s algorithms are unable to distinguish between valid conservative content and white nationalist content.