HIV diagnoses are appearing more frequently in the Philippines than in any other country, and one major cause has been dating apps, health advocates say.

The number of HIV cases in the country nearly doubled between 2013 and 2018 and has reached epidemic levels among men ages 15-34, The Wall Street Journal reported Thursday citing the United Nations’ AIDS agency.

“Young people are on dating apps these days, and they will have sex,” Filipino social media health advocate Jigg, who goes by his first name, told WSJ. “We need to equip them with the knowledge and resources that come with it.”

HIV is spreading faster in the Philippines than anywhere in the world. The cause? Dating apps. My latest @WSJ story shows how newfound social freedom is colliding with a void around sex education to fuel an unprecedented global crisis. https://t.co/ENrKrK4OrS

Jigg, 27, tested positive for HIV in 2017 after having sex with a man he met on Grindr — a dating app for gay, bi, trans and queer people — without using protection, according to WSJ.

The Philippines, a majority Catholic country, saw its first HIV diagnosis in January 1984. More than 75% of the 67,395 people diagnosed with HIV in the Philippines from 1984 through May were infected in the last five years, though nearly 10,000 additional undiagnosed carriers are living in the country, WSJ reported citing UNAIDS.

Additionally, 96% of HIV carriers who were infected over the last five years — the majority (84%) of whom were gay and bisexual males — contracted the virus through a sexual encounter, according to the government.

“A lot of Filipinos are still very conservative and they don’t like to see people talking about sex,” screening volunteer Romar Valentine Torres, 39, told WSJ. (RELATED: Trump Announces 10-Year Plan To ‘Eliminate’ HIV/AIDS Epidemic In US)

HIV prevention nonprofit LoveYourself program manager Danvic Rosadino said his organization has been trying to bring treatment to the Philippines “for years.”

The country approved an HIV-prevention drug called PrEP — short for Pre-exposure prophylaxis — earlier this year, though it was previously tested in the country in 2017. Pharmacies in the country, however, still don’t sell it on their shelves, and insurance companies won’t cover the cost, WSJ reported.

“People were opposed because they believed it would encourage more promiscuous behavior,” Rosadino told WSJ. 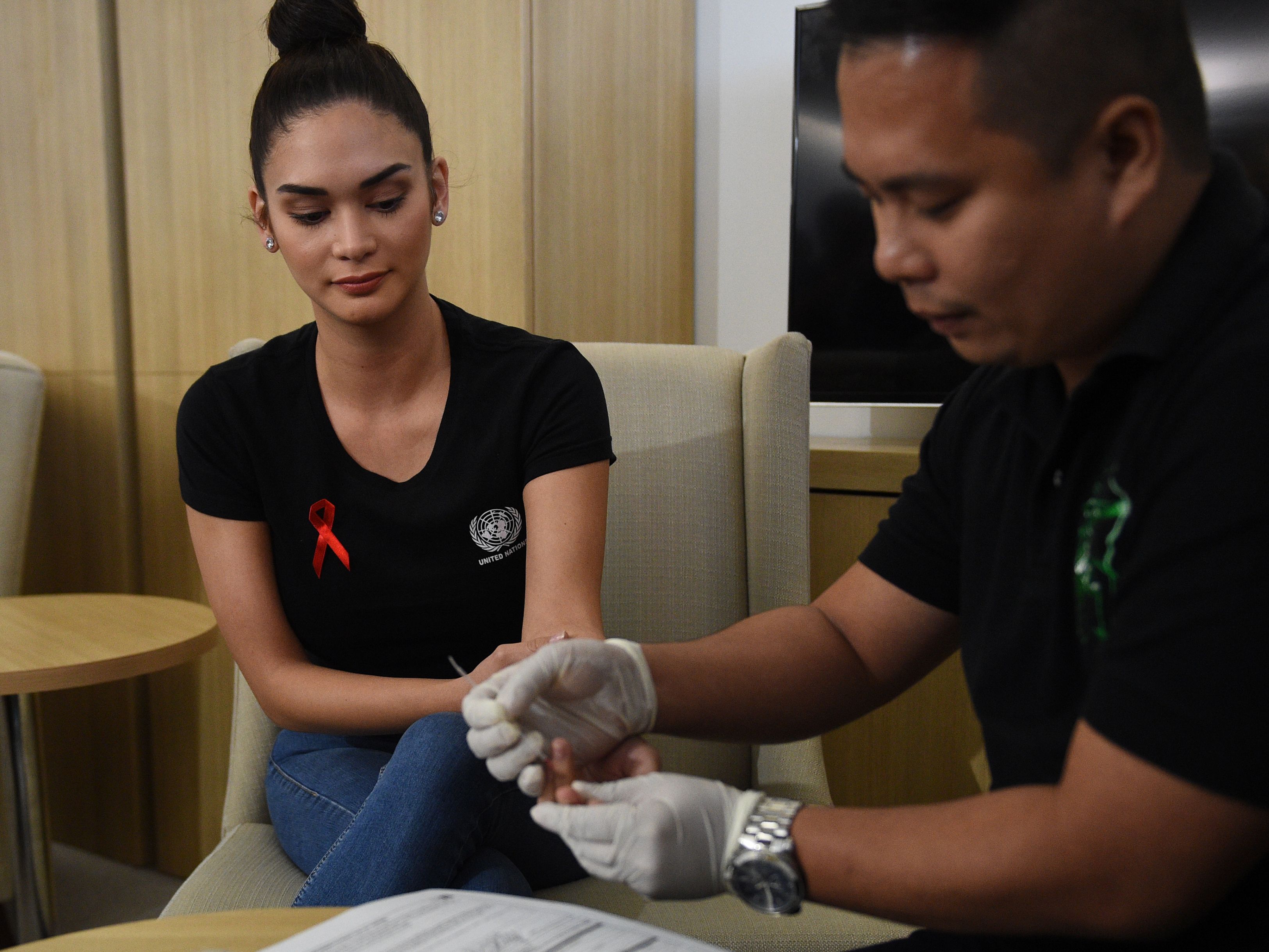 Pia Wurtzbach, the Philippines’ former Miss Universe and UNAIDS goodwill ambassador for Asia, looks on as a medical worker extracts her blood sample for an HIV test at a government office in Taguig City, suburban Manila on Aug. 9, 2017, as part of her advocacy to raise awareness on HIV. (TED ALJIBE/AFP/Getty Images)

Lawmakers lowered the legal age for HIV screenings to 15 this year, according to WSJ, and passed a bill requiring sex education to be taught in schools.

“The need to promptly arrest the surge in these cases [of early pregnancy, sexual violence and HIV] is increasingly becoming urgent. The young generation is really at risk,” Philippines Education Secretary Leonor Briones said, The Philippine Star reported in 2018.

“That’s why it is imperative to enable them to develop into responsible adolescents capable of making rational decisions based on adequate information and better understanding of reproductive health,” Briones added.