Sen. Elizabeth Warren repeatedly pushed a plan, as recently as 2015, that centered on each student repaying their own college debt, according to speeches, academic articles and deleted blog posts reviewed by the Daily Caller News Foundation.

But now, as a leading presidential candidate, the Massachusetts Democrat has changed her tune, saying that the wealthy’s corrupting influence on politicians caused the student debt crisis and that, as a consequence, the rich should be taxed to wipe out most student debt and to eliminate tuition.

When she released her plan in April to cancel debt for more than 95% of Americans with student loans, Warren said student loans should have never been issued in the first place. But Warren previously touted the benefits of taking out student loans, writing in a 2006 blog post that doing so enables students to graduate and enter the workforce sooner than those that work their way through college.

The core of Warren’s “Service Pays” proposal, which she first introduced in a now-deleted blog post in 2006, was to allow any student, regardless of their family’s income, to take out government loans to pay for their education, but with one caveat: their debts “must be repaid.”

To help students pay back their debts, Warren’s proposal, which she expanded upon in a 2007 academic article, would have allowed “any student who is willing to work” the opportunity to satisfy their debt by performing public service at home, in the military or abroad.

“College students can shoulder educational costs if they know they will have opportunities to repay loans,” she wrote. “A program that features four years of loans, followed by four years of public service to forgive those loans, would be such an opportunity. It would significantly diminish the burden of educational debt and keep open the option of public service and other lower-paying, but potentially more rewarding, jobs for graduates.”

“Service Pays is one such program,” Warren wrote.

Warren said the idea behind her proposal conveyed a “powerful” message to college students: “To say to young people that YOU can pay for your college education in four years and be student-debt-free would change the thinking of a lot of young people and their families.”

More importantly, Warren said, her proposal structured opportunities in a way “so that one of the first adult decisions young people make is how to take care of themselves and pay for their own educations through service.”

“The value to young people of the option to work for themselves is immense,” she said.

Warren’s new plan to tackle the student loan crisis that she introduced in April as a presidential candidate contains no such value proposition to students.

Warren in 2006: Avoiding student loans is ‘not always the best approach’

Warren promoted her “Service Pays” proposal, which called for expanding access for students to borrow money to fund their education, as a senator as recently as 2015 in a speech before the American Federation of Teachers.

She even touted the benefits of taking out student loans in 2006 in response to a user comment on her blog.

“While avoiding student loans is an admirable goal, it’s not always the best approach,” Warren wrote. “Students who work their way through college may graduate without debt, but it may take them twice as long because they can’t carry a full course load.”

Warren said the consequences of graduating without the burden of student loans “may come at the cost of several years they could have been working at a higher wage – potentially, a much higher wage.”

But as a presidential candidate in 2019, Warren says the federal government has been irresponsible for pushing students toward taking out loans to pay for their education.

“The first step in addressing this crisis is to deal head-on with the outstanding debt that is weighing down millions of families and should never have been required in the first place,” she wrote in April. “That’s why I’m calling for something truly transformational — the cancellation of up to $50,000 in student loan debt for 42 million Americans.”

Warren says her debt-cancellation plan, which would be funded by an annual 2% wealth tax on families with assets over $50 million, will cancel debt for more than 95% of Americans currently holding student debt.

‘The debts must be repaid’

Warren wrote in 2005 that middle-class financial difficulties are the cause of a combination of bad government policies and bad decision-making by individuals.

“To talk about a middle class in financial trouble, we need to engage as many people as possible,” she continued. “I seek your advice: Can we have a conversation about policy choices and personal choices?” 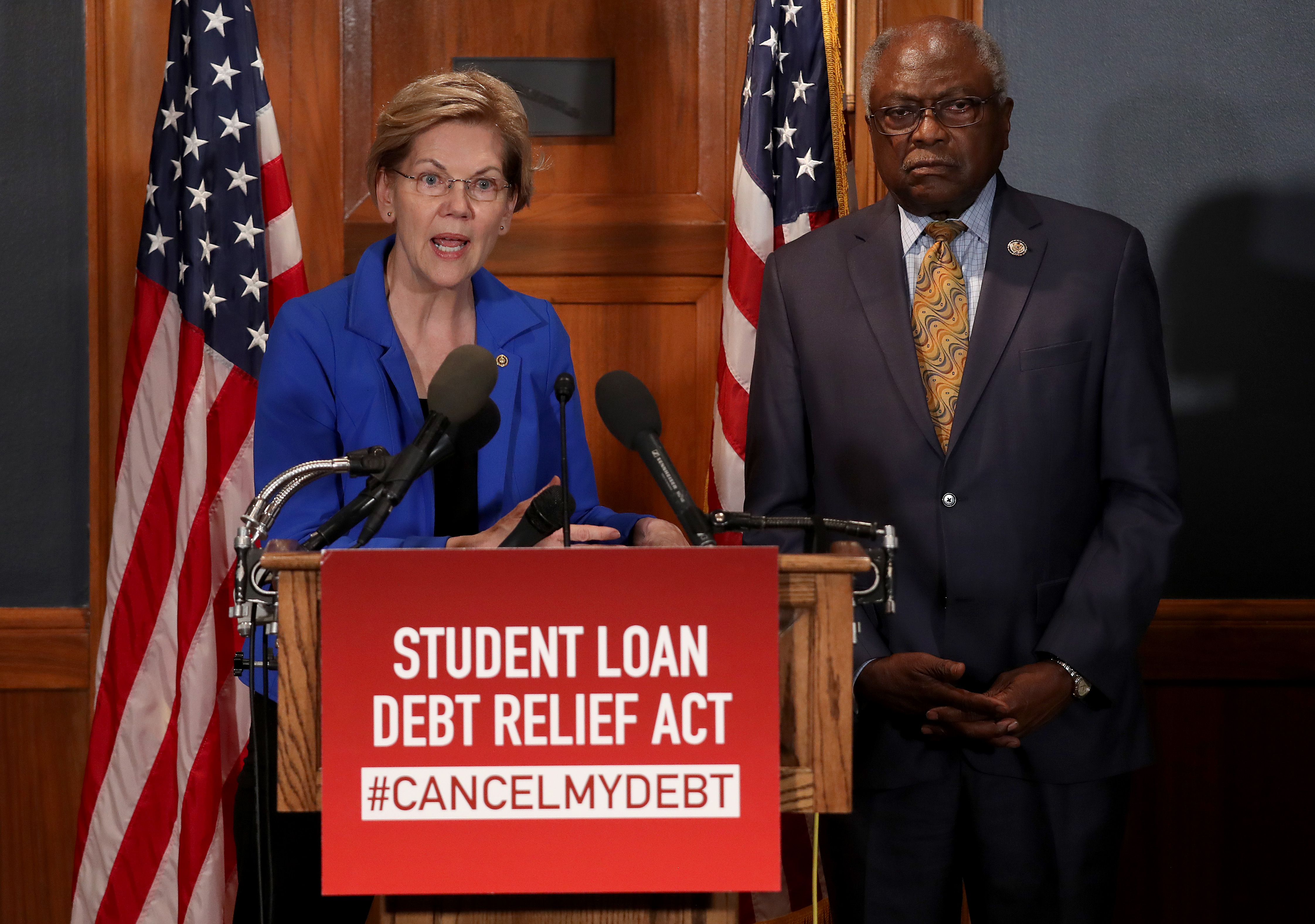 When she first introduced “Service Pays” in 2006, she said the “core of the idea” was that any student should be able to borrow money to go to school, “but the debts must be repaid.”

In another 2006 post, Warren wrote that some kids just don’t have what it takes to succeed in college.

“The reality of our world is that some young adults are simply more adept at school than others,” she wrote. “[F]or the ones that struggle with it, not having the time to study and/or being exhausted when they do study, might be what makes the difference between their ultimate success or failure in college.”

Now, as a leading Democratic presidential candidate, Warren said in her plan that “[l]ike K-12 education, college is a basic need that should be available for free to everyone who wants to go.”

Warren has also seemingly discarded the notion that personal choices have an impact on one’s ability to pay down their debt, saying that the fault lies squarely on the corrupting influence of the wealthy.

‘Both sides are right’

Warren’s framing that the student loan crisis is entirely the fault of the corrupting influence the wealthy and mega-corporations have on the government is inconsistent with her framing of the issue prior to her presidential run.

In her speech before the American Federation of Teachers, Warren didn’t make a single mention of billionaires or corporations and said the pathway to debt-free college starts with both Democrats and Republicans “to admit how much is wrong and that the other side has a real point.”

“Democrats talk about resources, pointing out that we’re no longer investing in our kids the way we once did,” Warren said. “Republicans talk about risk and incentives – arguing that students take on debt without fully understanding the consequences and that colleges get access to federal dollars pretty much no matter the quality or cost of the education that they provide.”

“Here’s the truth – both sides are right,” she said. “And if we’re going to make college truly affordable, both sides will need to acknowledge that you can’t solve one without solving the other.”

In the speech, Warren said that Democrats must “admit that we will never have affordable college without demanding real accountability in exchange for investments.”

“Most schools face no consequences for failing to serve students or for wasting federal financial aid dollars,” she said. “Conservatives are right: We can’t keep pouring money into schools without demanding something in return.”

“Marketplace incentives are so completely backwards that higher tuition is sometimes seen as a signal of higher quality, so now there is evidence that some schools are raising tuition to make themselves appear more attractive,” she said.

Warren specifically targeted the issue of administrative bloat in U.S. colleges, proposing that schools should be required to spend a minimum portion of their financial aid on educational expenses.

But the plan Warren put forward in April to make college tuition-free contains no mention of colleges’ irresponsible spending. Instead, it relies entirely on taxing the wealthy roughly $1.25 trillion over 10 years.

Warren’s campaign did not respond to a request for comment.