Federal prosecutors are reportedly investigating Trump lawyer Rudy Giuliani’s dealings in Ukraine, including whether he acted as an unregistered foreign agent, an allegation he denied.

Prosecutors in Manhattan are looking into whether Giuliani worked with Ukrainians to oust Marie Yovanovitch as ambassador to Ukraine, two anonymous sources told The New York Times.

Giuliani told the Times he is not aware of any investigation against him. He also said he was investigating issues involving Ukraine on behalf of his client, President Donald Trump, and not Ukrainian officials.

Trump responded to news of the investigation Saturday by defending his lawyer.

So now they are after the legendary “crime buster” and greatest Mayor in the history of NYC, Rudy Giuliani. He may seem a little rough around the edges sometimes, but he is also a great guy and wonderful lawyer. Such a one sided Witch Hunt going on in USA. Deep State. Shameful!

Two Giuliani associates, Lev Parnas and Igor Fruman, were indicted Thursday on charges that they made illegal campaign contributions, including to a lawmaker who pushed for Yovanovitch’s firing in a letter to Secretary of State Mike Pompeo in 2018.

Yovanovitch testified to Congress on Friday, and accused Giuliani and his Ukrainian partners of taking part in a “concerted effort” to force her removal.

Prosecutors said Parnas and Fruman, who operated businesses in Florida, were involved “in causing the U.S. government to remove or recall the then-U.S. Ambassador to Ukraine.” (RELATED: Giuliani Associates Who Worked On Trump-Biden Probe Have Been Indicted)

“PARNAS’s efforts to remove the Ambassador were conducted, at least in part, at the request of one or more Ukrainian government officials,” the indictment stated. 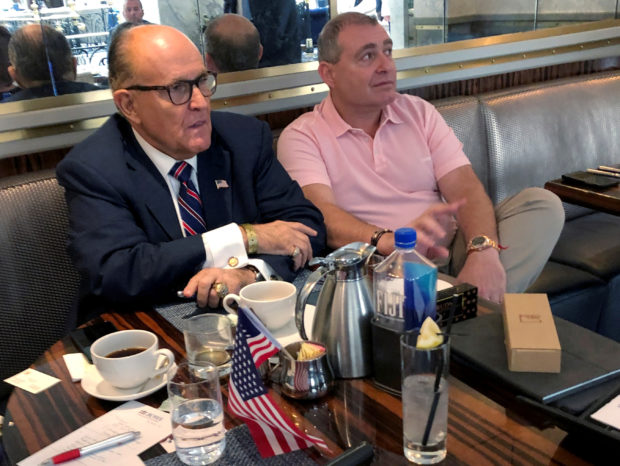 NBC News reported Friday that at least one of the Ukrainian officials is Yuriy Lutsekno, who served as Ukraine’s general prosecutor until Aug. 29.

Federal law requires Americans to disclose to the Justice Department any lobbying and media contacts made on behalf of foreign governments or foreign officials. But the law in question, the Foreign Agents Registration Act (FARA), does have an exemption for attorneys representing foreign clients.

The Justice Department has ramped up enforcement of FARA in recent years, beginning with the special counsel’s investigation.

Giuliani started working with Parnas and Fruman beginning late in 2018 to obtain depositions from Lutsenko and his predecessor, Viktor Shokin. Giuliani and his two associates interviewed both of the prosecutors in late January 2019, along with George Boyle, an investigator at Giuliani’s consulting firm.

Lutsenko said in interview Jan. 25 and Jan. 26 that Yovanovitch told him in 2017 to end an investigation into Serhiy Leshchenko, a former Ukrainian lawmaker who publicized the so-called “black ledger” during the 2016 campaign that allegedly contained illicit Ukrainian payments to Paul Manafort. (RELATED: Ex-Ukrainian Ambassador Blasts ‘Concerted Effort’ To Force Her Out)

Manafort has denied receiving the payments, and has called the ledger a fraud.

Lutsenko’s allegations first came to light March 20, when John Solomon, a columnist at The Hill at the time, published an interview in which the Ukrainian prosecutor accused Yovanovitch of giving him a list of names of Ukrainians he was not allowed to investigate.

Lutsenko later retracted the claim, but it proved too little, too late for Yovanovitch. She was recalled from Kiev on May 20, several months before her term was set to expire.

In the report, Solomon cited a letter that former Texas Rep. Pete Sessions sent to Pompeo on May 9, 2018, accusing Yovanovitch of making disparaging remarks about Trump.

Solomon cited the letter to show that Lutsenko was not alone in having concerns about Yovanovitch. But the report did not note that Parnas and Fruman were working behind the scenes with Sessions and Lutsenko to promote the allegations against the diplomat.

Parnas and Fruman met with Sessions at his Capitol Hill office May 9, 2018, the same day Sessions sent the letter to Pompeo. The Parnas/Fruman indictment stated they committed to raising $20,000 for Sessions’s campaign. He lost his 2018 re-election bid, but is running for office in 2020.

Giuliani’s focus on Ukraine has already landed his client, Trump, in hot water.

During a July 25 phone call with Ukrainian President Volodymyr Zelensky, Trump asked for help investigating one of Giuliani’s allegations regarding Joe Biden.

Giuliani has alleged Biden pressured then-Ukrainian President Petro Poroshenko in 2016 to fire a prosecutor investigating Burisma Holdings, a Ukrainian energy company that had Hunter Biden as a board member.

Trump’s request that Zelensky investigate Biden’s possible role in shutting down the investigation is the focus of a Democrat-led impeachment push.

Trump also referred to Yovanovitch as “bad news” in the call with Zelensky.

Giuliani could not immediately be reached by the Daily Caller News Foundation for comment.