The British Parliament will likely legalize same-sex marriage and abortion in Northern Ireland at midnight Monday.

The British parliament imposed an amendment on a “routine bill” in July that will legalize gay marriage and abortion as of midnight Monday, according to the New York Times. The Republic of Ireland voted to legalize abortion last year, the publication reports.

Northern Ireland’s regional government blocked abortion in 2017 before collapsing, according to the Times, and the British Parliament took advantage of the opportunity to add the amendment legalizing abortion and same-sex marriage. Northern Ireland holds the world record for going the longest period of time without a sitting government after going more than 589 days without a government, the Independent reports.

Northern Ireland formerly had some of the most restrictive abortion legislation in Europe; Northern Ireland and Poland both banned all abortions except on the basis of health or therapeutic grounds, according to the Center for Reproductive Rights. Northern Ireland’s abortion laws included the provision of mental health, and Poland’s laws permitted abortion in cases of rape, fetal impairment, incest. 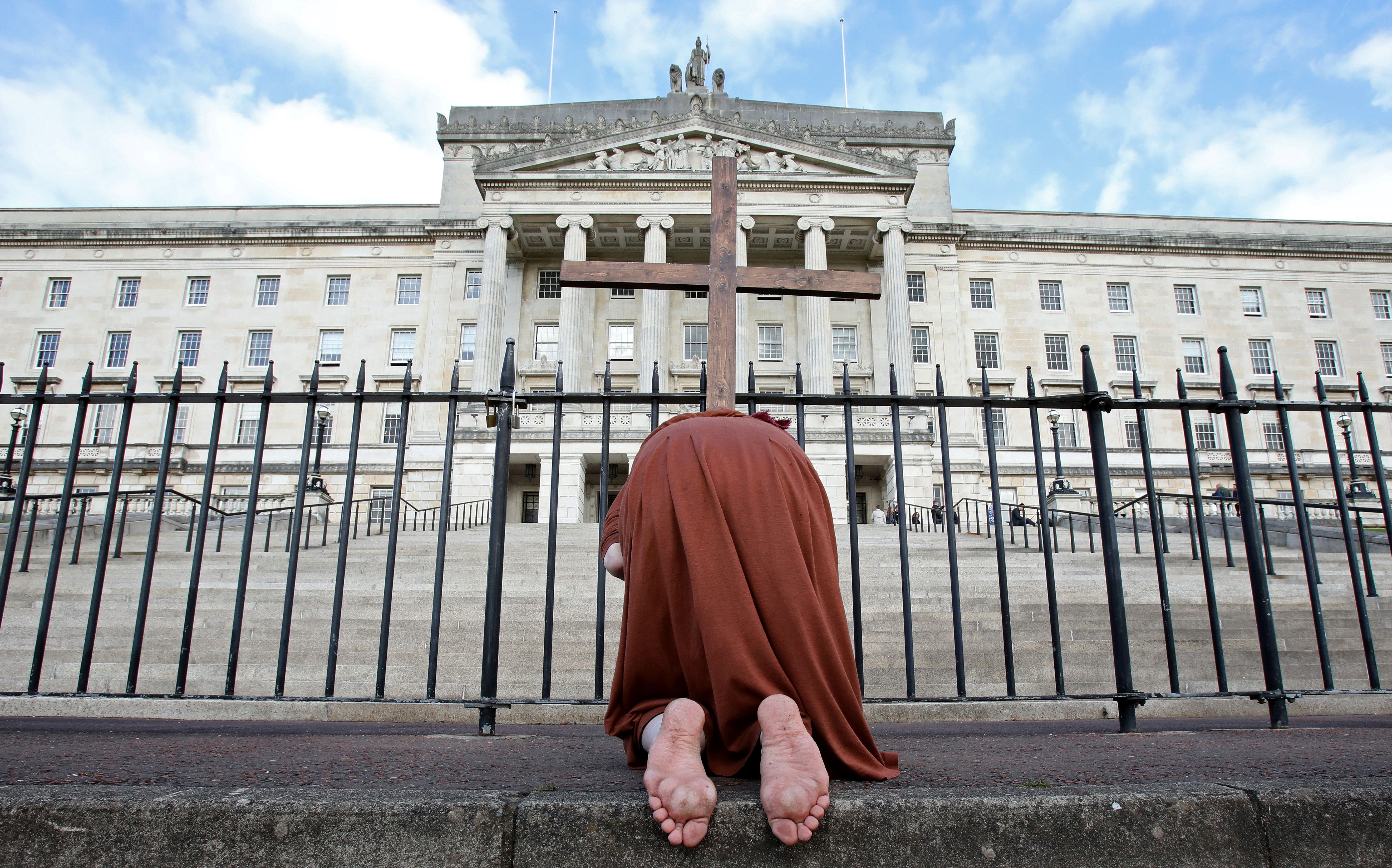 An anti-abortion activist poses for a photograph whilst demonstrating outside of Parliament Buildings, the seat of the Northern Ireland Assembly, on the Stormont Estate in Belfast, Northern Ireland, on October 21, 2019, as a number of lawmakers returned to attend a special sitting. (Photo by PAUL FAITH/AFP via Getty Images)

Malta is the only other European country to totally restrict abortion. (RELATED: 50,000 People Demand A Ban On Abortions In Slovakia’s Annual March For Life)

The legalization will come after the High Court in Belfast ruled in early October that Northern Ireland’s 158-year-old abortion laws breach the United Kingdom’s understanding of human rights, the Guardian reports.

“For too long, women and girls in Northern Ireland have been left behind their counterparts in the rest of the U.K. when it comes to their human rights,” said British lawmaker of the Labour Party, Stella Creasy, who put the amendment forward.

“Today, women can know that their houses will not be raided for abortion pills,” Creasy added. “They will not be reported to the police if they seek aftercare at the doctor’s, and they will not be dragged through the courts and threatened with prison just for accessing basic health care.”

Pro-life activists deplore the coming legislation, saying that the battle is not yet over.

“When Gods warriors go down on their knees, their battle is not over it has just begun,” Bernadette Smyth wrote in a Facebook post on Sunday. Smyth is the leader of Precious Life, the biggest pro-life group in Northern Ireland according to the Times.

Precious Life wrote in a Facebook post that Northern Ireland’s Stormont Assembly sat for the first time in three years to “stop the imposition of laws from Westminster.” The group also marched Monday in protest against the legalization of abortion, according to a Facebook post, carrying the banner, “Abortion – Not in our Name.”

“The people of Northern Ireland have fought the good fight and will continue to do so,” Smyth said Monday, according to a Facebook post from Precious Life.

“This is our time, this is our battle. The imposition of abortion will be met with opposition from people throughout Northern Ireland,” Smyth added.”

“We will increase our campaigns to ensure women are given better crisis pregnancy support. We will step up our ‘Lobby for Life’ political campaigns, and our ‘Youth for Life’ street outreach campaigns to expose the horrific reality of abortion. The battle to protect our most vulnerable citizens – our unborn babies – is far from over and will continue with even greater determination than before.”

Precious Life did not respond to a request for comment from the Daily Caller News Foundation.