Three individuals who are intimately familiar with House procedures expressed dismay at several tactics used by Democrats, including the use of a SCIF — a Sensitive Compartmented Information Facility — to conduct interviews, the issuing of subpoenas to force depositions, and the lack of a vote to give official authority to the committees charged with conducting the impeachment proceedings.

These sources — who wished to be anonymous in order to speak candidly about the inquiry — told the Caller that these actions show that the Democrats are more concerned about optics than proper procedure or transparency.

“There are no rules. [House Intel Chairman Adam] Schiff is making up the rules as he goes along,” a GOP aide said.

House Republicans showed up to a closed deposition with Defense Department official Laura Cooper on Wednesday, demanding Democrats open the process to the public. Some of the congressmen reportedly entered the SCIF with their cell phones, a violation of national security protocol. West Virginia Rep. Alex Mooney, who publicized a phone call he made from the SCIF, later claimed he had done so from a secure line and not a cell phone. (RELATED: Republicans Storm Closed Impeachment Proceedings)

WATCH: @RepByrne explains why he and other House Republicans walked into a closed-door impeachment session, causing Adam Schiff to leave #nine2noon pic.twitter.com/H9a1KUCWgM

A former Oversight Committee counsel brushed off concerns about potential security violations, instead raising questions about why Democrats are conducting proceedings in a SCIF in the first place. The information being given in the depositions is not classified, as evidenced by the selective leaks to the press. Democrats would not be putting out the opening testimony of Ukraine diplomat Bill Taylor, for example, if he were sharing classified information, the counsel reasoned.

Further, an interview that could stray into classified territory would still start in a normal setting, and would only be moved to a SCIF if deemed absolutely necessary.

“Schiff is using the SCIF process to limit how many members can get access via committee of jurisdiction,” a GOP aide said.

The interviews with officials related to the Ukraine inquiry should also not be conducted as “depositions,” according to the former counsel and two GOP aides. Democrats have claimed that the officials are being blocked from testimony by the Trump administration, forcing them to issue subpoenas for those witnesses. However, most of the individuals who have been asked to testify have voluntarily agreed to appear, such as former US Special Envoy for Ukraine Kurt Volker. Gordon Sondland, the U.S. ambassador to the European Union, was instructed not to testify by the State Department, but seemingly intended to do so anyway before Democrats issued a subpoena. Normally, a deposition would only occur if a witness refused to comply with a normal transcribed interview. 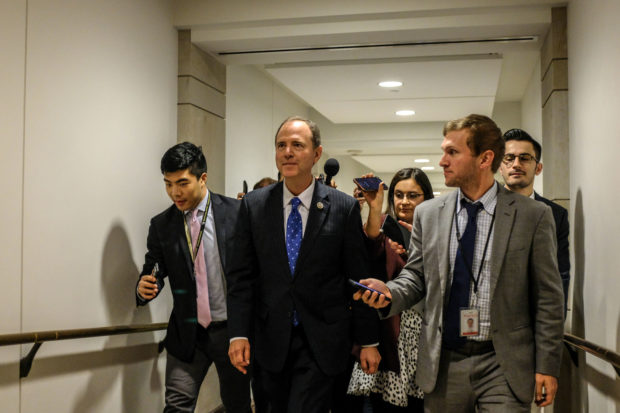 The Democrats have issued these so-called “friendly” subpoenas for the depositions so that they can keep out agency and White House counsel, who can direct witnesses to refuse to answer certain lines of questioning or assert executive privileges, the three sources argued. Depositions also serve the purpose of making interview transcripts harder to access. As Republican Florida Rep. Matt Gaetz claimed during a Thursday interview on MSNBC, he can only view the transcripts if he is constantly under surveillance by staffers from Rep. Schiff’s office. The transcripts also cannot be released in full to the public.

The three sources claimed Democrats did this intentionally so that they can choose which information from the transcripts is leaked to the press.

The Democrats have also skirted precedent by refusing to hold a vote to open an official impeachment inquiry, meaning none of the the three committees that have thus far been tasked with interviewing witnesses — Oversight, Foreign Affairs, and Intelligence — have been given any official authority to do so. Meanwhile, the Judiciary Committee, which has historical precedence for overseeing impeachment proceedings, has been completely excluded from the process.

House Republicans attempted to censure Rep. Schiff earlier this week for fabricating Trump’s phone call with the Ukrainian president during a hearing and “a mockery of the impeachment process, one of this chamber’s most solemn constitutional duties.” The censure failed in the Democratically-controlled House, and Schiff responded, “It will be said of House Republicans, When they found they lacked the courage to confront the most dangerous and unethical president in American history, they consoled themselves by attacking those who did.”

House Speaker Nancy Pelosi has also brushed aside claims that Democrats have flouted proper process for the impeachment inquiry, asserting, “What the Republicans fear most is the truth.”