Al-Baghdadi, 48, died by detonating a suicide vest, killing himself and three of his children as he hid in a tunnel in his Syrian compound. The operation was named after Kayla Mueller, an American aid worker who was reportedly raped and tortured by al-Baghdadi after being captured in 2013. She is believed to have died in 2015.

The raid began with a tip in 2018 from one of al-Baghdadi’s top aides, and others soon followed.

The raid started with a 2018 tip given to Iraqi intelligence officers by Ismael al-Ethawi, one of al-Baghdadi’s aides, according to Reuters. After he was captured by Turkish officials, al-Ethawi told the intelligence officers locations of places that the ISIS leader would use to meet up with some of his aides.

“Ethawi gave valuable information which helped the Iraqi multi-security agencies team complete the missing pieces of the puzzle of Baghdadi’s movements and places he used to hide,” an Iraqi security official said according to Reuters.

Ethawai has been sentenced to death and is currently jailed in a prison in Iraq, The New York Times reported.

Iraqi, U.S. and Turkish intelligence officials then determined that al-Baghdadi was likely hiding out in Idlib, Syria, after five senior ISIS leaders were captured and revealed where they were meeting their leader, according to Reuters. Syrian informants tracked down al-Ethawi and followed him to the ISIS leader’s home, passing the information to the C.I.A.

“In mid-2019 we managed to locate Idlib as the place where Baghdadi was moving from village to village with his family and three close aides,” an Iraqi official said, according to Reuters. 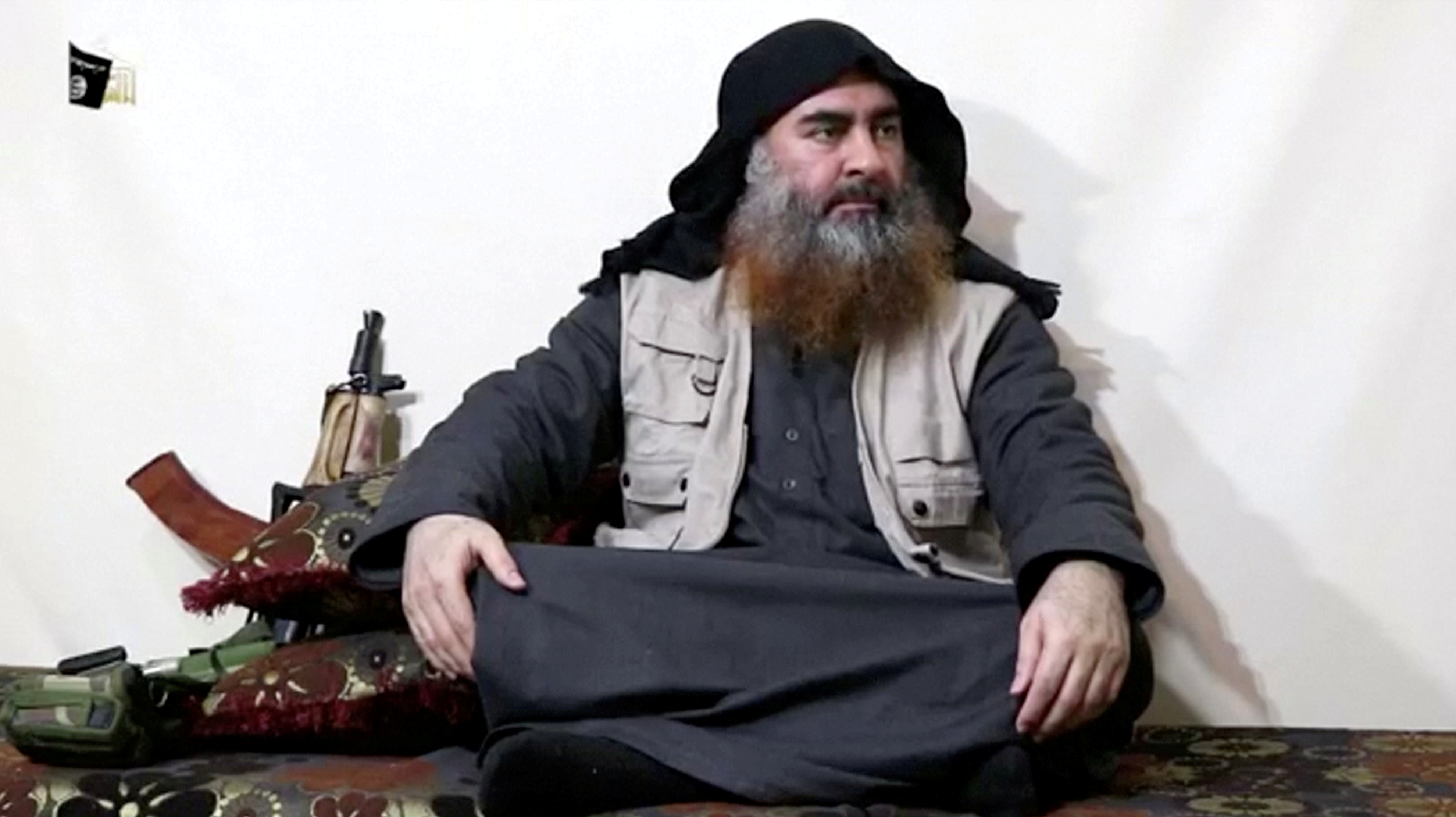 Other captured prisoners and a disaffected ISIS member may have played a role in confirming al-Baghdadi’s location as well, according to Business Insider. Abu Suleiman al-Khalidi, one of the men seen sitting with al-Baghdadi during his last video appearance, was captured by Hayat Tahrir al-Sham, a group in Idlib that was also searching for the ISIS leader, Reuters reported.

Al-Sham gave even more evidence that al-Baghdad was hiding out in Northern Syria. The compound where he was believed to be was then observed through a satellite for five months, the unnamed official added.

The official operation came together around two weeks ago.

U.S. officials received more information on where al-Baghdadi was early last week and determined Thursday that there was a “high probability” he would be at the Syrian compound, Vice President Mike Pence said on CBS’s “Face the Nation.”

Military officials gave Trump different options on how to proceed with a raid as al-Baghdadi left the compound in a bus with his family Friday, according to Reuters. Pence said that “actionable intelligence” allowed the U.S. to go after the ISIS leader Saturday.

“There it was, his last moment to live,” the Iraqi official said, according to Reuters.

Eight helicopters left Iraq early Sunday morning local time and landed around four miles away from the Turkish border in Syria, where the troops were met with small arms fire according to Business Insider. Some of the troops yelled to al-Baghdadi to come out of the compound and entered after exploding two walls to avoid a possibly booby-trapped entrance.

The breach came after 11 children and an unknown number of adults came out of the compound, The Washington Post reported.

Al-Baghdadi retreated into the tunnels of the compound, taking three of his children with him. A U.S. forces dog, whose photo Trump tweeted Monday afternoon, followed the ISIS leader into the tunnel. While inside, al-Baghdadi detonated a suicide vest that killed himself and his three children. Trump said Monday that the tunnel collapsed after the explosion.

The dog was injured but is recovering.

A DNA test was performed to confirm the body was that of al-Baghdadi, and the compound was destroyed.

U.S. forces took the body to a secure location and did a DNA test where it was confirmed that the man who blew himself up was al-Baghdadi. Additionally, two men were taken into custody from the compound, Chairman of the Joint Chiefs of Staff Gen. Mark Milley said in a press conference Monday, Business Insider reported.

A number of al-Baghdadi’s men were killed and no U.S. lives were lost, Trump said Monday. 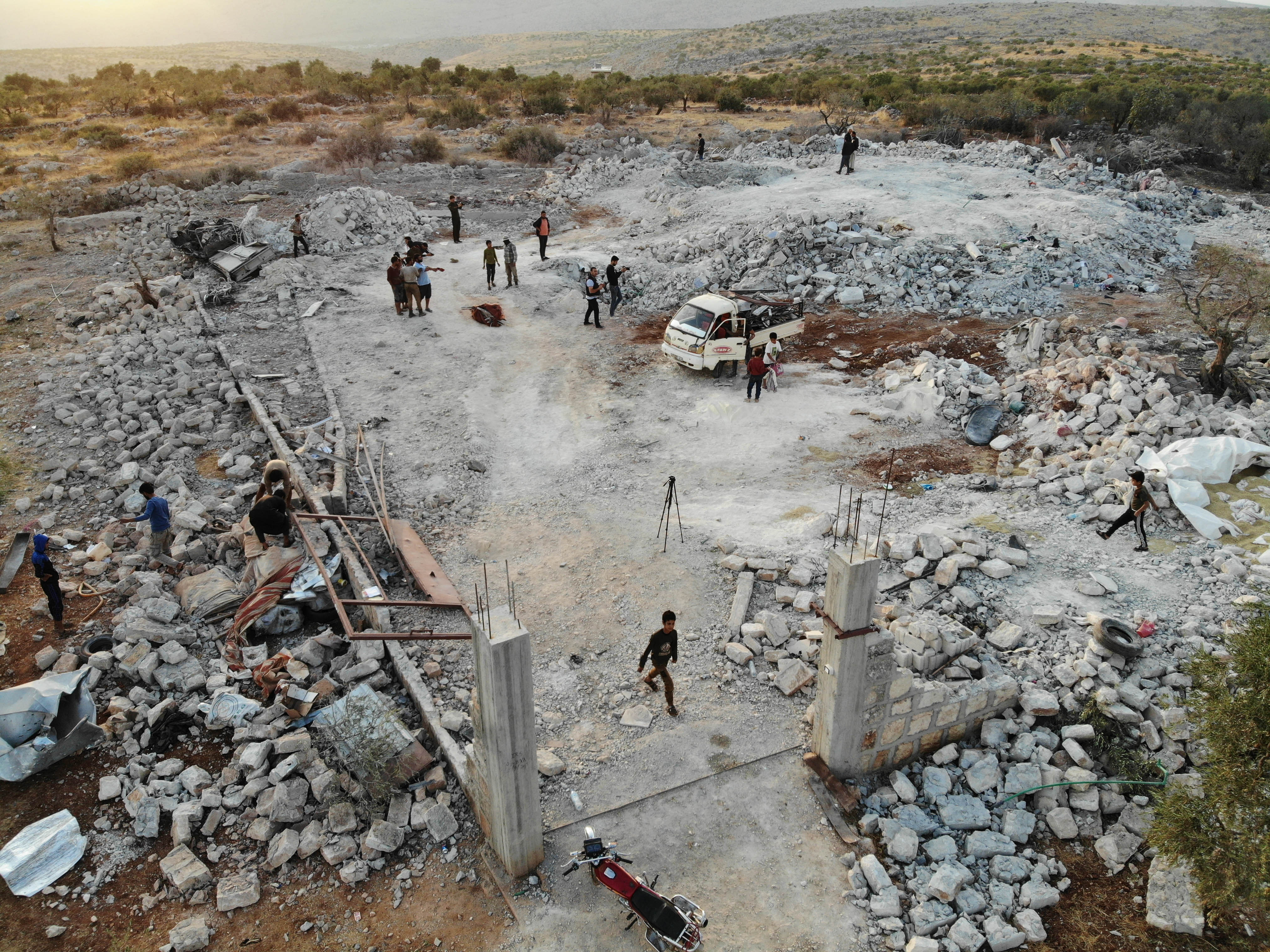 The site that was hit by helicopter gunfire near the northwestern Syrian village of Barisha in the Idlib province along the border with Turkey, where “groups linked to the Islamic State (IS) group” were present. (OMAR HAJ KADOUR/AFP via Getty Images)

Al-Baghdadi was confirmed dead by 7:15 p.m. Eastern Time Saturday evening, according to National Security Advisor Robert O’Brien during an interview on NBC’s “Meet the Press” Sunday. The operation is believed to have also included Kurdish forces, and Trump briefly mentioned them during his televised speech Sunday.

“I also want to thank the Syrian Kurds for certain support they were able to give us,” he said.