President Donald Trump and First Lady Melania Trump were greeted with a chorus of boos at Game 5 of the Nationals-Astros World Series In Washington, DC Sunday night.

While the DC crowd clearly objected to POTUS’ politics, his critics continued pouring it on Monday morning for a different reason: Barron Trump’s absence in the presidential suite. (RELATED: President Trump Arrives At Nationals Vs. Astros World Series To Chorus Of Boos)

Wait, did Trump really not bring Barron to the game? Or his grandchildren?

Dude didn’t bring his own kid to the game. I guess Barron is watching at home? https://t.co/w6umvgoti5

People keep noting that Trump didn’t bring his teenage son to the World Series without considering the possibility that Barron doesn’t want to be seen in public with him.

A Father not taking his son to a baseball game, let alone a World Series game, is perhaps the worst indictment of a “family man” I’ve ever heard.

I have a feeling Trump could have gotten Barron a ticket, if he got tickets for Scalise and Gaetz.

If you were Barron would you want to go to a baseball game with Old Man Trump? @realDonaldTrump

– Goes to World Series game
– Crowd chants #LockHimUp
– Thankfully he forgot to take Barron with him
– Melania looks like she wants to flee the country
– They weren’t even invited to the damn game!
– Trump is going to prison
– It’s still only 11:30pm

I guess Barron doesn’t like baseball, but little Matt Gaetz does.

Barron Trump should not feel bad. What dad takes his 13 year old son to a World Series baseball game when he gets free tickets?

You took Lindsey Graham to the baseball game? Instead of Barron?

Everybody calm down about Trump not taking Barron to the World Series. Barron was busy writing the proposal for his tell-all memoir, Son of Treason, which just sold at auction for $2.8 million. Out in July from Simon & Schuster.

Back off, haters! Yes, Trump was booed at the World Series but only because Crooked Hillary filled the stadium with the 3 million paid illegal immigrants that registered & voted against him 2016.

Boooooooo!!! Do you even know you have a son named Barron? Booooo!!!

Houston knocked off Washington by a final score of 7-1 Sunday night to take a 3-2 series lead. Both teams travel back to Houston Monday ahead of Tuesday’s Game 6. If the Nationals manage to take home a W on Tuesday, Game 7 will take place on Wednesday. 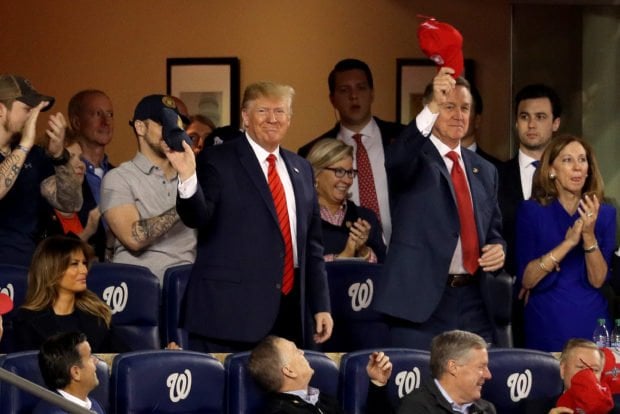 (Photo by Will Newton/Getty Images)

Make sure you go and follow us on all of our social media pages: