First son Donald Trump Jr. visited SirisXM’s New York headquarters Thursday to dish about his new book, Triggered: How The Left Thrives On Hate And Wants To Silence Us, and other hot topics.

Naturally George Conway, husband to one of his father’s top aides, Kellyanne Conway, came up in conversation as did Jeffrey Epstein‘s death. Don Jr. recalled a story about how he once “mortified” Huma Abedin, Hillary Clinton‘s longtime aide and ex-husband to the disgraced politician, ex-Rep. Anthony Weiner (D-N.Y.).

Trump grew sentimental when discussing his best Halloween ever.

He said he ran into Abedin two Halloweens ago while dressed up as President Trump. He didn’t dress up as ordinary DJT. Instead, he put on skintight Spandex to become superhero, junk-showing version of his father and randomly ran into Abedin on the street.

“It was the funniest thing in the world,” he told host Andrew Wilkow. “I’m sitting there dying and the mortified look on her face was the greatest thing I’ve ever seen.”

Don Jr. told the host that it’s the first time he has ever shared this story with the media. 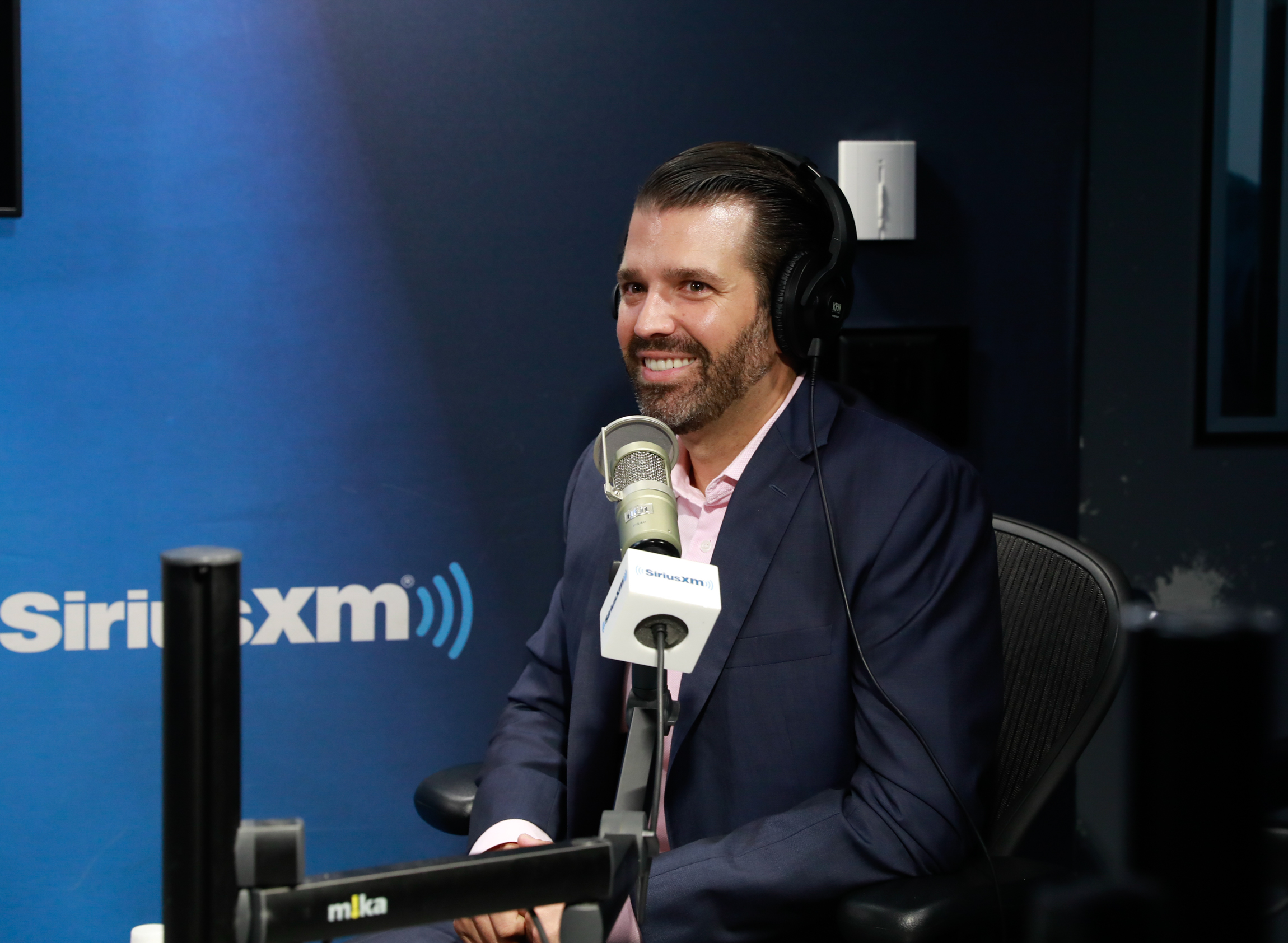 Photo of Donald Trump Jr. at SiriusXM. By Mara Hagopian.

“I turn around and I’m in this Donald Trump spandex superhero outfit showing off most of the goods, and I turn around and I literally ran right into Huma Abedin,” he said. “Literally. It was the funniest thing in the world. I’m sitting there dying and the mortified look on her face was the greatest thing I’ve ever seen. I don’t think it was last year but the year before. But it was one of the great Halloween experiences of my life, and this is the first time ever I’ve told it.”

Jr. obviously trashed George Conway, portraying him as jealous of his wife’s success. (NYT Reporter Randomly Runs Into George Conway Outside The Zoo)

He also revealed how his father really felt about Epstein, who, in NBC News footage from 1992, can be seen dancing at a party with his father and a gaggle of blonde women.

Let’s pause. Somehow NBC has a slew of internal sexual harassment and misconduct allegations in the last several years, but in July, 2019, they found the nerve to release footage of Trump dancing with Epstein from nearly three decades ago.

President Trump has said he had a falling out with Epstein.

“Yeah, he [Epstein] was literally, he was literally thrown out of Mar-A-Lago because some of the rumors and all of this stuff,” he told SiriusXM. “And that’s the problem, the news cycle. Whether it’s that, whether it’s Ukraine, I’ve been talking go look at my stump speeches, I’ve been talking about Ukraine and the corruption there and all that nonsense for like a year.” (RELATED: Trump Jr. Wishes His Name Was Hunter Biden)

He continued, “You know when it got mainstream media pickup? When they could make it about Trump. Epstein has been a problem for a long time. This has been a de facto thing. Whether, Matt Lauer at NBC, all these things they’ve been in the room, when you can somehow try to make it about Trump or when they’re no longer in power to be able to do your bidding, that’s when it becomes news. And they don’t talk about those things.”

“They only become news when you can somehow use it as a way to own Trump,” he said. “And we got them and so it’s a problem.”