MOOD: “Going down for a nap. When I wake up, I want this website to be fun again.” — Andy Lassner, The Ellen Show‘s executive producer, on Sunday at 5:12 p.m. EST.

Sunday, 11:30 p.m. EST: “To give you some insight on how things are going with @andylassner, here’s what he just texted me: ‘How dare you…I’ll talk when I want to talk!'” — Yashar Ali, writer, HuffPost, New York Mag.

Note: The address of the party has been removed. 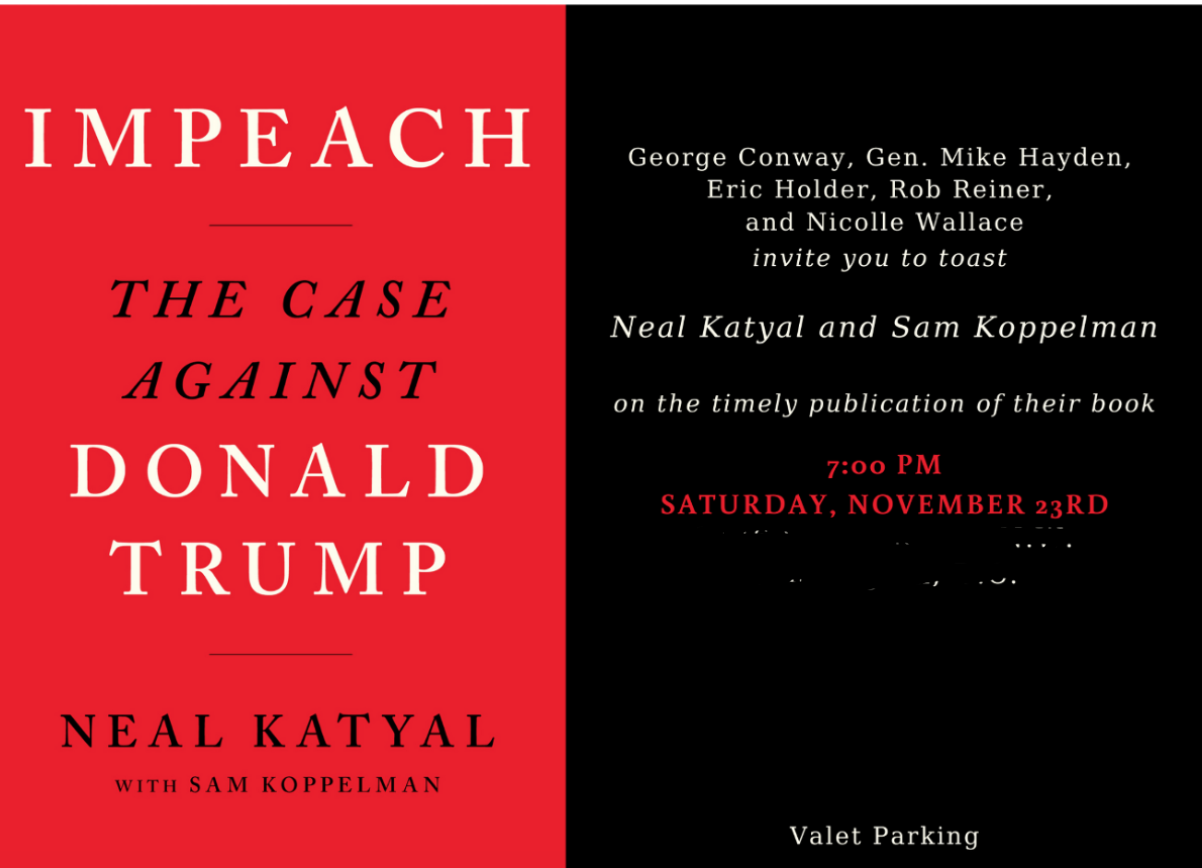 Donald Trump Jr. and his girlfriend, ex-FNCer Kimberly Guilfoyle, showed up at UCLA Sunday to promote his new book: Triggered: How the Left Thrives on Hate And Wants to Silence Us

A bunch of righties reportedly began shouting at Trump Jr. for not having a Q & A. This is when Guilfoyle began shouting them down. The event was moderated by Turning Point USA founder Charlie Kirk. This gets somewhat complex, but the right-wing protesters later explained they support President Trump, just not TPUSA.

“Maybe don’t do this to calm a crowd: ‘When the crowd continued to demand a chance to ask questions, Guilfoyle snapped, ‘Let me tell you something, I bet you engage & go on online dating because you’re impressing no one here to get a date in person.’”

“This is the woman who created all the controversy that made @realDonaldTrump go after @RepCummings and Baltimore. Cummings never got over the attack on him and the city. It is all because of her.” — April Ryan, White House correspondent, American Urban Radio, contributor, CNN. She’s referring to Kimberly Klacik, a county GOP official who wants Cummings’ vacant seat in Congress.

CNN’s Brian Stelter backed Ryan, saying, “All because of her … and her ability to get on Fox!”

Molly Jong-Fast, columnist, The Bulwark: “You guys, I think Donnie junior is having some problems with his magical mystery tour.”

Susie Banikarim, media consultant, Gizmodo: “I can’t get past how weird it is that Don Jr. is taking his girlfriend along on his book tour just so she can defend him when people are mean.”

“Most of us try to hit the hotel gym when we can, but hard on these bus tours. My diet consists mostly of water, coffee, and bud light.” — Lis Smith, senior adviser, communications for South Bend Mayor and presidential hopeful Pete Buttigieg.

“Learn how cricket is played is an example of those things that I would love to know someday but ultimately find very little use in it and keep putting it off and know in my heart I’ll never know, like having children or buying a home or not having existential depression.” — Charlotte Clymer, comms, Human Rights Campaign.

“A server at Trump Tower tells me Trump just ordered a steak up to his office. When asked if it was cooked well done, he refused to comment.” — Henry Rodgers, congressional reporter, the Daily Caller.

Tweeting after midnight is always a good idea

Journo puts on his ‘sex glasses’

“Many years ago a gf accidentally sliced my eye with her nail during S E X and it was fine in the end but since I have one eye I was shook. She bought me some glasses (4 sex lol). But they r uggo. We broke up soon after for unrelated reasons, but I still have the uggo sex glasses.”

“My actual glasses are at my office right now but the reason I am telling you this story is because I was squinting at the TV trying to figure out how to get HBO Go to work on it and was finally like ‘Ben, you better put on the sex glasses’ haha”

“Have lunch with me! Please! Bidding benefits our troops *and* helps me heal from how unpopular I was in middle school! And high school! Maybe college too!” — Taffy Brodesser-Akner.

“My 6yo boy suggested I remarry and offered up some options, which included the already married fathers of his friends at school, the garbage collectors and Barack Obama.” — Lyz Lenz, Columbia Journalism Review.

“Eat, and I cannot emphasize this enough, my dick.” — Helen Rosner. 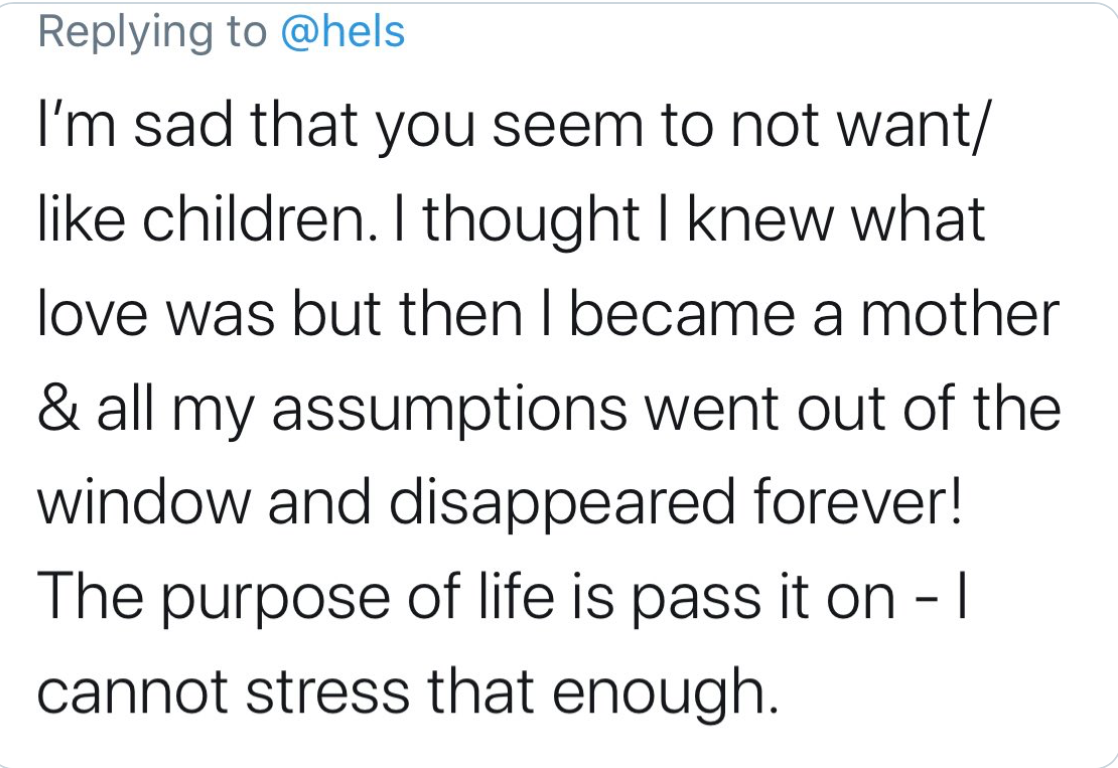 The situation: Grammar Police tries to counsel Payday Report and ex-Politico labor reporter Mike Elk on the proper use of “whose” and “who’s.” He wasn’t too happy about it.

Grammar Police: “It is possible for you, @MikeElk, to use “someone [who’s] been a champion” instead. ‘Whose’ is possessive; ‘who’s’ means ‘who has’.”

Mike Elk: “Fuck someone called the Grammar Popo on me.”

His offending tweet: “There is a certain disdain of how workers here in the Rust Belt feel among certain circles in the Acela Corridor. We need someone whose been a champion for workers for their entire lives just not when it was conveniently popular.”

“Airplane etiquette note: if you’re sitting in the window seat, you have to ask the other people in your row before you put the shade down. Your proximity to the window does not mean you control access to it. This of course will be written into law upon my ascension to the throne.” — Matt Walsh, blogger, The Daily Wire.

Kat Timpf, Fox News: “‘Wait. You wear glasses but you don’t need them to see? Why?’ — Girl who just got done telling me she bought her boobs.”

Best headline on Ed Henry’s new show: “Ed Henry Returns To Fox As Anchor Of His Own Show After Donating Part Of Liver To Save His Sister’s Life” Here.

Glenn Beck says something rational: @ABC @CBSNews How can you destroy this woman’s life? There is a new #metoo movement that will come. And it will come for bullies like you. Where is the fairness and justice promised by our new SJ overlords?” — Glenn Beck, radio host, TheBlaze. Read about the time he thought I reached a “new low” here.

Backstory… Chrissy tweeted something about football, which appeared to set this guy off.

Her reply: “I know you’re trying to be mean but I really needed this today so thank u.”

D.C. paparazzo Mark Wilkins gives Popeye’s a thumbs up: “I didn’t see a line @PopeyesChicken tonight so I had to see if this Chicken sandwich was worth the HYPE… YES!! DELICIOUS!!”

Hey Wilkins, you need to… hook up Ben Dreyfuss with a sandwich: “I want to try one of the chicken sandwiches everyone loves but I don’t want to deal with the lines and would mainly be interested more in some service actually bringing me the sandwich. And yet none of the usual services seem to have the sandwich available.” — Ben Dreyfuss.

Lefty Neera Tanden apologizes for her tweet against Mayor Pete

“I’m deleting a tweet on @PeteButtigieg because he was inaccurately quoted. @PeteButtigieg did not say Obama in the quote. And I regret spreading the inaccuracy in the story, that has since been updated. Very sorry this went viral.” — Neera Tanden, president, Center for American Progress.

Backstory: “My story about @PeteButtigieg ends with him referring to the ‘failures of the Obama era.’ That’s an inaccurate quote — the result of transcribing a noisy recording at a loud rally. His exact words were ‘failures of the old normal.'” — Evan Halper, national reporter, LAT.