“This is the life Max Boot has chosen for himself: Joy Behar praising one of his pieces while making it clear that she has no idea who he is.”

MOOD: “I hopped off the plane at DCA, and … boy is it Swamp-y here.” — Josh Hammer, editor-at-large, The Daily Wire.

SPOTTED: Roger Stone at The Palm with Olivia Nuzzi

“Stone is eating dinner with @Olivianuzzi, a source at the Palm tells me.” — Henry Rodgers, congressional reporter, The Daily Caller. His trial Wednesday will include closing arguments. (The pair dined at The Palm, a who’s who of Washington political culture, Tuesday night. A spy noticed that Roger ordered a Stoli martini with blue cheese olives and lobster.) (RELATED: Ana Navarro-Cárdenas Fires Back At Roger Stone After Her Calls Her A ‘Piglet’) 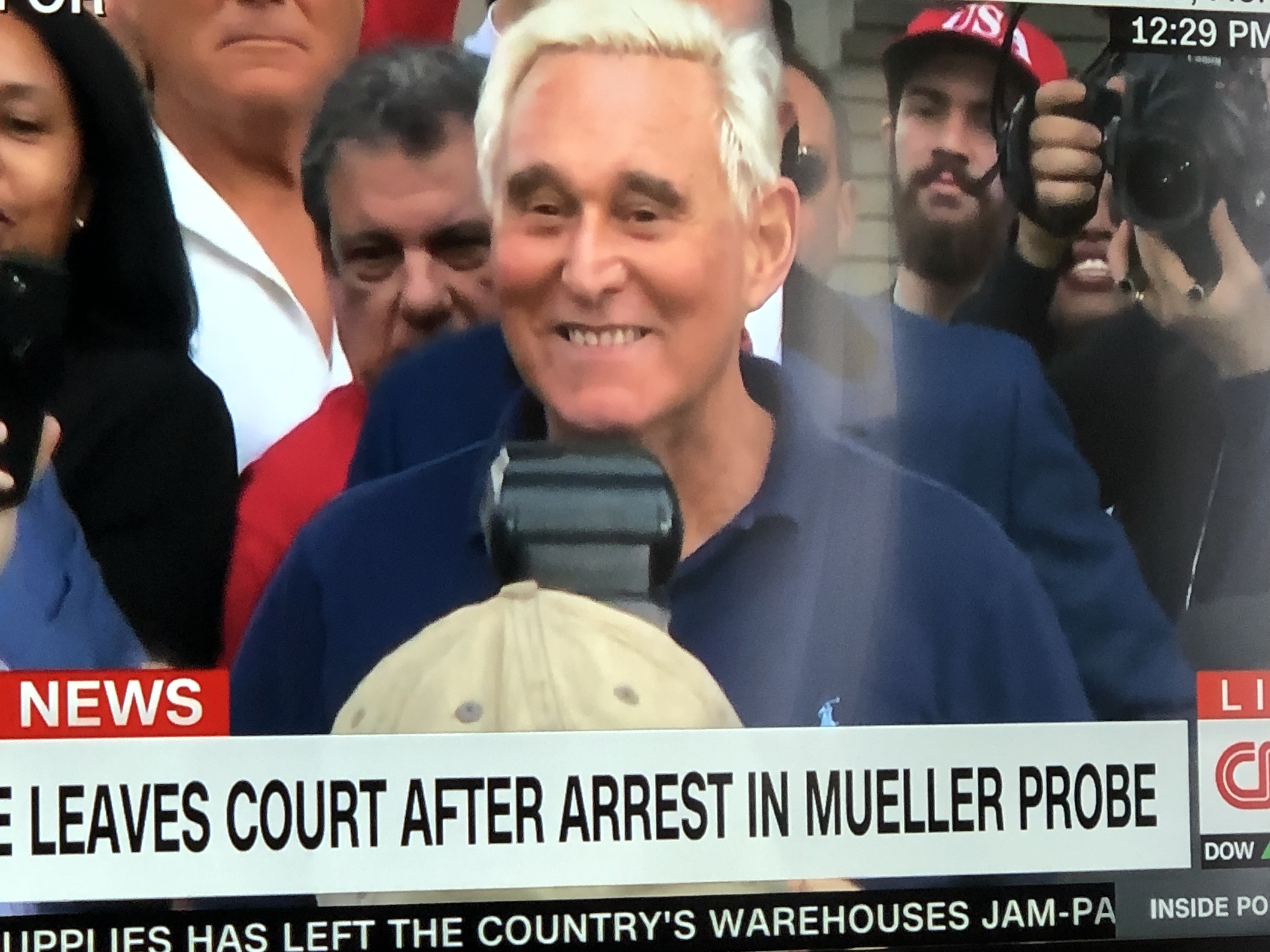 “Our message to ABC News: Nothing stops. This is now an avalanche — a movement of Insiders that will help Project Veritas hold the Mainstream Media and Big Tech accountable. They are coming to us. And the next time the networks abuse their power, our Insiders will be watching, filming, and sending it to Project Veritas to hold them to account.” — James O’Keefe in an email fundraising plea.

“Today Show co-anchor @SavannahGuthrie is trending nationally because half the people are slamming her for being rude to @NikkiHaley and the other half think she’s doing a great job grilling Ambassador Haley.” — Yashar Ali, writer, HuffPost, New York Mag.

Ann Coulter has stern advice for the masses

“Partly for reasons of honor, mostly because it’s calcifyingly boring, I’m not watching a minute of the hearings and neither should you.” — Ann Coulter, conservative commentator.

“Having teen daughters is hard. Being a working mom is hard. Getting ‘we went in another direction’ over and over is really hard. Living in the Trump era is really f*cking hard. So please send cute pet and baby photos, gifs & vids stat.” — Elizabeth Thorp, who played Sec. of Defense Maria Ford in the Netflix series House of Cards.

“Got into an argument with a four year-old (not even mine) who was insisting that “Barack Obama isn’t real” and he’s only in stories.” — Matthew Yglesias, executive editor, Vox.

“The fight continues — if you’re not outraged, you’re not paying attention. (shout out to my friend @AyannaPressley for the shirt and the reminder).” — Katie Hill, who recently resigned her seat in Congress after having at least one inappropriate sexual relationship with at staffer. She had nudes published in Daily Mail and other pubs against her will.

Juanita Broaddrick has a question for ABC’s Amy Robach

This is an open message to Amy @arobach regarding her open mic statements. Amy, you said, ‘It’s unbelievable what we had … Clinton, we had everything.’ Epstein is dead, but Bill Clinton isn’t, and his victims deserve to know…what is everything??” — Juanita Broaddrick, who has accused former President Bill Clinton of rape.

In other words, Bernstein says, NO ONE KNOWS WHAT WILL HAPPEN AND ANYTHING IS POSSIBLE.

Bernstein:  “No one knows what is going to happen in the coming weeks or months, except likely impeachment by the House, because of the Democratic majority. As for the results of a Senate trial or the remainder of Trump’s term or the 2020 election, anything is possible.”

The NYT broke the story in August— but MSNBC’s Chris Hayes reminded people Tuesday that White House Press Sec. Stephanie Grisham had a rough past. “The WH press secretary has two DUI’s,” Hayes tweeted Tuesday. The arrests happened in 2013 and 2015. The 2013 charge was reduced to reckless driving. Grisham informed the White House about these incidents before being hired.

Chrissy Teigen’s crass reaction to hubby John Legend being People‘s Sexiest Man Alive: “My secret is out. I have fulfilled my dream of having boned @people’s sexiest man alive!! An honor!!!!!”

This is a sampling. It’s way too dicey to run all of their accusations and responses. But this gives you a sense that Thanksgiving won’t be easy this year if they’re all at the same table.

This message from a total stranger delivered at my coffee table from the waitress reminded me that this wold is full of humanity and dried the tears caused by the moral violence and public defamation ⁦@KPapadopouloss⁩ is putting me trough. Yes I am vulnerable. #Solidarity pic.twitter.com/jVOTB1zRFg

Kiki Papadopoulos: “Simona I will show the public just how vulnerable you are you are a beast it’s time I show truth telling.”

Simona Mangiante Papadopoulos: “I think it’s pretty clear to everyone who the ‘beast’ is.Tell the public how you lost custody of your children for Being an abusive mother and how you hid your first child from George’s father. Now please stop Harrassing me and be more constructive with your life. I did only good.”

Kiki Papadopoulos: “She had done so .many bad thing [sic] I do ask myself and George why is she still with he tells her to leave but then bevs [sic] him to stay. There will be a book out on the truth.”

Kiki Papadopoulos: “Simona u can change for George it’s too late but when u meet ur next beau recall all the lies u said beatings and punches u ga ve [sic] sabotaging his career eetc pls change Simona that is All [sic] we ask if it wasn’t for George u would still be walking the streets of Italy pls be kind.”

Simona Mangiante Papadopoulos: “Kiki you embarrassed yourself enough and still failed to provide evidence of “the many things” I did to George and yourself. Facts against lies: I supported him financially and morally when he was let down by everyone. You didn’t even visit him in jail. Some decency please. Liar.”

Simona Mangiante Papadopoulos: “I am tired of this sick lies. And it’s disgusting to talk about sex and cheating all the time. I was there with Stephanie and you make up I was sleeping with @TomArnold who never even came to Wisconsin. Have you got some decency. Where do you take these fantasies from?”

In May, George Papadopoulos told a writer for a WaPo Magazine story this regarding The Daily Caller: “As an individual I’m more comfortable with Washington Post people like you than with, I dunno, the Daily Caller.” Hmmm…. Other details: The WaPo Mag story says Simona has a “terrible relationship with George’s family.” His family did not attend their 2017 wedding.

So she makes an unwise move.

“Got embarrassed that the delivery guy from my favorite Thai place stared recognizing me, so I ordered from a worse Thai place— in case you were wondering what I’ve been up to.” — Dana Schwartz, author, TV writer. She hosts the podcast Noble Blood.