“Uh oh… Breitbart’s mad that I stood back up. What are they going to throw at me next to try and make me go away?”

— Former Rep. Katie Hill (D-Calif.) in a tweet directed at a Breitbart News story about her. Hill recently resigned amid reports of at least one sexual relationship with an aide as well as nude pictures she has said are the result an acrimonious divorce from her husband. The Breitbart News story was actually largely even and did not unnecessarily bash her.

MOOD: “No better way to end a workday than walking all the way to the Metro to realize your wallet’s missing, freak out, walk all the way back to the Senate press gallery, see that it’s not there, freak out even more, and then empty your backpack to realize it was there the entire time.” — Seung Min Kim, White House correspondent, WaPo.

Seriously — what the hell? On Wednesday, ABC’s Chief Political Analyst Matthew Dowd blatantly insulted Rep. Elise Stefanik (R-N.Y.) for being a woman. He insinuated that she was elected because she’s a woman and not because she has any intelligence to back up her gender. He deleted the tweet, apologized to her and ridiculously said people were misinterpreting his words. (RELATED: ABC’s Chief Political Analyst Insults GOP Congresswoman, Then Reminds Her How Much He’s Done For Women)

On Thursday morning at 4:32 a.m., Dowd tried to change the subject by tweeting out French impressionism. What can’t Claude Monet fix when you’ve s**t the bed? Dowd wished the iconic a happy birthday. 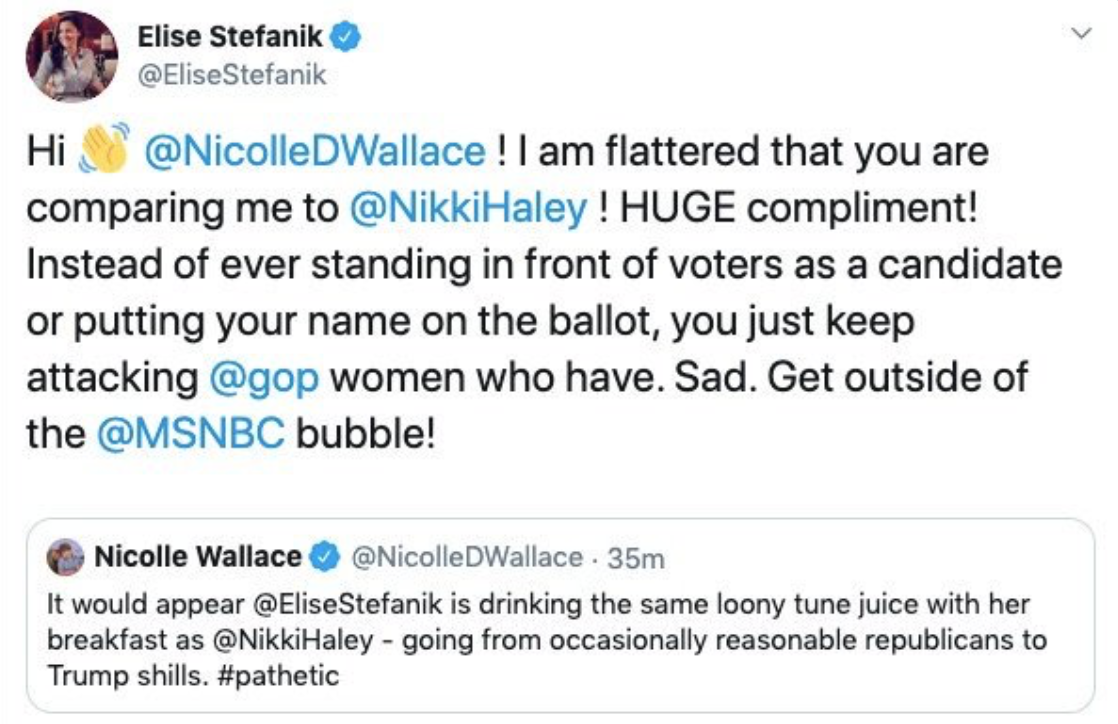 “The Democrats are like the desperate ex girlfriend/boyfriend that you want absolutely nothing to do with!” — Eric Trump, second son to President Trump.

Mother Jones‘s Ben Dreyfuss replied, “Eric Trump actually has my number. I’m both a Democrat and the sort of weak emotional terrorist who every couple of weeks decides the only way to get rid of their crushing existential self-hatred and regret is to give into it and be like ‘WhY DiD’nT wE GeT mArRiEd iN 2008?'”

“Notice how the media have to keep calling the witnesses ‘patriotic.’ It would be like if I had to keep reminding people of how masculine and handsome I am. You begin to wonder what I’m compensating for.” — Eddie Scarry, commentary writer, Washington Examiner.

“I have dedicated my entire professional life to the conservative movement. Today was a very sad day to be a Republican. It brings me no joy to admit this.” — The Bulwark‘s Swift.

CNN’s Stelter shows off a new meme feature himself at 1:39 a.m.

I have finally made it. I have been copy and pasted onto the distracted boyfriend meme. Thank you to the anonymous troll who sent this to me. pic.twitter.com/vcT1QpmoRR

Therapy dogs were sighted on Capitol Hill amid the stress of the first public impeachment hearing https://t.co/5pfOoCwImI

“I’m taking a break from Twitter to focus on an effort that will tackle the leftist indoctrination that occurs in America’s public schools unlike ever before,” the teen pro-Trump activist tweeted. “Can’t wait to share with you guys what I’ve been working on when I return!” (RELATED: CJ Pearson Envisions Future On ABC’s ‘DWTS’)

Note to Readers: Pearson fans needn’t worry. He tells me he’ll only be gone for two to three weeks.

Impeachment drinks at a glance…

This guy contemplated running for prez, but his fam said no. Here.

Former Trump campaign aide Michael Caputo leads people in prayer for Roger Stone, whose Washington trial is coming to a close. “I’m praying every day, and everybody I know is praying every day,” he told Politico. “When court starts and is in session, we have people in there praying. There’s going to need to be celestial intervention for him. It can happen.” Here.

Journo annoyed when gym gets too personal: “Every gym in East Austin is like ‘We’re not just a gym, we’re a family’ and ‘With our holistic approach we create a culture of wellness…you’re encouraged to discover your life’s purpose.’ STFU, I just want a cheap gym with weights. I already have a family, thanks.” — Liz Wolfe, staff editor, Reason Mag.

NSFW: “Can I just applaud this article for actually acknowledging The Period Shits because this was NOT something we were ever told about growing up and people NEVER TALK ABOUT IT.” — Rosie Beard reacting to this NYT story by Jen Gunter about a teen who no longer wants her period.

Bill Clinton accuser blasts FNC’s Chris Wallace: “What???? Anti-Trumper Chris Wallace is “shocked” that not one Republican there today is turning against Trump. Chris, you imbecile, that’s because it’s all bullshit.” — Juanita Broaddrick.

Stormy Daniels never misses an opportunity to show off her assets 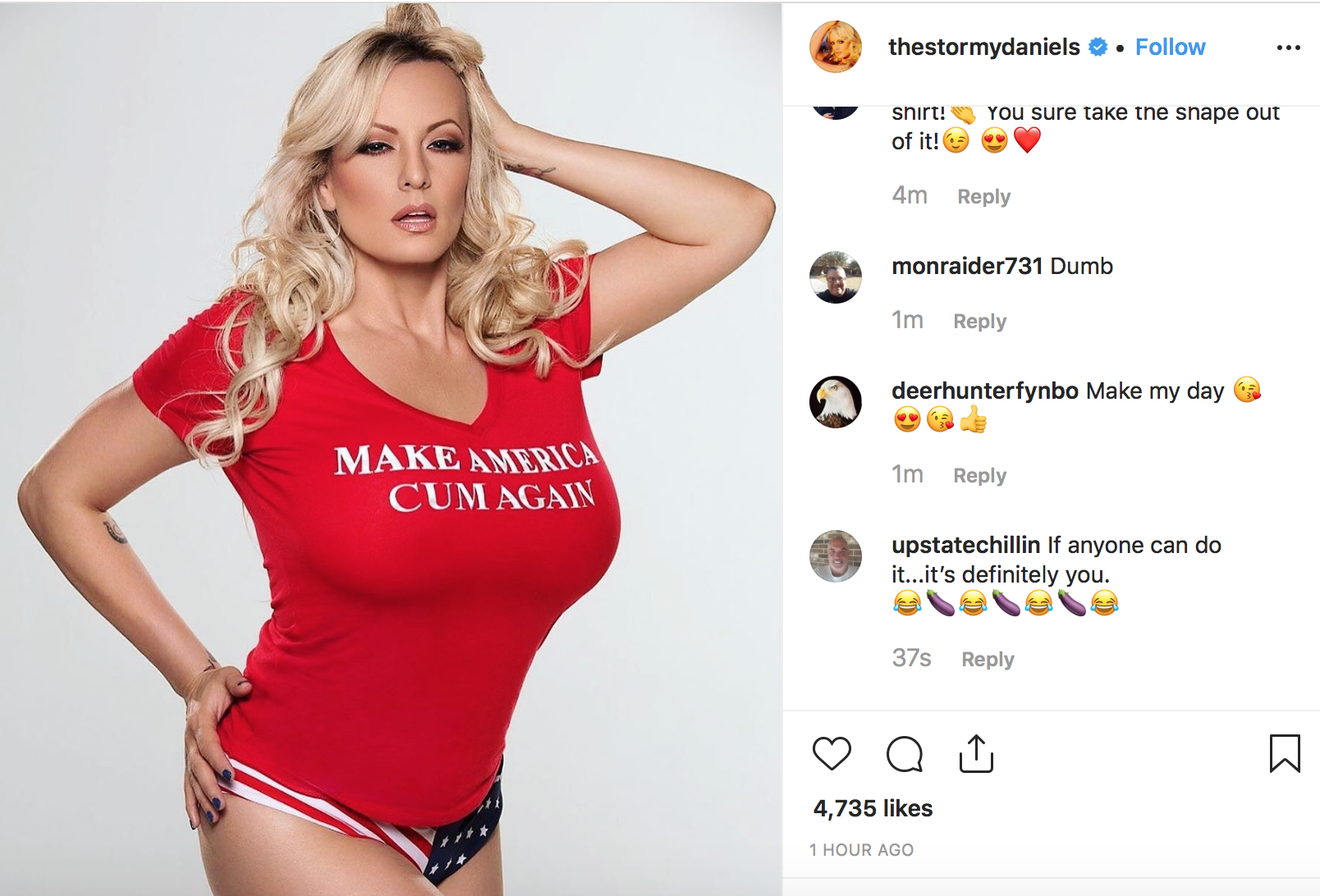