A federal jury in Washington, D.C., on Friday found Roger Stone guilty on seven counts in a case stemming from the special counsel’s investigation.

The jury, which deliberated for two days, found Stone guilty on five counts of making false statements to the House Intelligence Committee in September 2017, one count of obstructing an official proceeding, and one count of witness tampering.

Stone, a longtime friend of President Trump’s, was indicted on Jan. 24. He faces a maximum of 50 years in prison, but is likely to receive a far lighter sentence when he is sentenced in February.

Investigators with the special counsel as well as the House Intelligence Committee investigated whether Stone was a conduit between the Trump campaign and WikiLeaks, which released Democrats’ emails hacked by Russia. (RELATED: How The Star Witness In Roger Stone Trial Proved ‘Difficult’ For Prosecutors)

The special counsel’s team ultimately determined that no Trump associates, including Stone, took part in the hacking and dissemination of Democrats’ emails. The special counsel’s report did say members of the campaign were eager for WikiLeaks to release material because they thought the documents would help Trump. 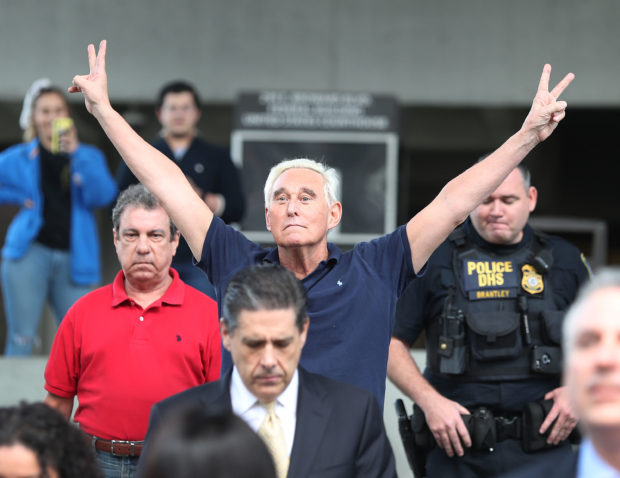 Prosecutors relied on three main witnesses to make the case that Stone lied to Congress about his discussions with Trump advisers regarding WikiLeaks. During closing remarks this week, prosecutors asserted that Stone gave the misleading statements in order to protect Trump from scrutiny in the Russia probe.

The witness tampering and obstruction charges dealt mostly with Stone’s interactions with Randy Credico, a left-wing comedian and radio host who was in contact with Stone during the campaign.

Stone reluctantly identified Credico as a source for tips about WikiLeaks’ plans to release information damaging to the Clinton campaign.

Stone became a central focus of investigators over remarks he made in August 2016 indicating that he had contact with WikiLeaks founder Julian Assange. He also tweeted on Aug. 21, 2016 that it would “soon [be] the Podesta’s time in the barrel,” a reference to Clinton campaign chairman John Podesta and his lobbyist brother, Tony.

WikiLeaks began releasing John Podesta’s hacked emails on Oct. 7, 2016. Democrats began accusing Stone of having orchestrated the leaks given his tweet months earlier. But Stone vehemently denied having advance knowledge that WikiLeaks had Podesta’s emails. He has insisted that he knew that WikiLeaks planned to release information that would hurt the Clinton campaign based on Assange’s public statements, and tips he received from Credico, who is close friends with one of Assange’s attorneys.

Stone is the second Trump associate to be found guilty at trial. A jury in Virginia convicted Paul Manafort, a former Stone business partner and Trump campaign chairman, on Aug. 21, 2018 on charges related to financial crimes stemming from his work in Ukraine years before joining the Trump team.