Fox News host Jesse Watters’s mother opened up to The Atlantic about how the family deals with their different political opinions ahead of Thanksgiving.

Anne Bailey Watters is more liberal than her Fox News host son and often texts him about his television appearances. These “Mom Texts” have appeared frequently on “The Five”over the past two years and have given viewers a small glimpse into the life of a mother and son who rarely agree politically, but still manage to get along.

“Please be assured that despite your WRETCHED political orientation I love you forever!” she wrote in a text read aloud on “The Five” last week.

Jesse Watters began to get texts about his commentary after joining “The Five” in 2017, he told The Atlantic’s Joe Pinsker. He said that the messages make him laugh, and he always responds even though they don’t end up influencing his political views. Anne, the author of these now well-known messages, opened up for an exclusive interview where she noted that the messages bring her a sense of clarity.

“By pressing send, I actually find the action clarifying and clearing,” Anne Bailey Watters said in an email to The Atlantic. “Next I pause, quietly hoping that he heeds just a moment of my perspective (and ire). And then, more times than not, I shake my head in disbelief and remark to my husband, ‘Can you believe that boy!!! Can you believe he said that! That’s typical. That’s my Jesse! Look at that grin and those sparkly eyes!’ Despite my degree of outrage, I have to laugh.” 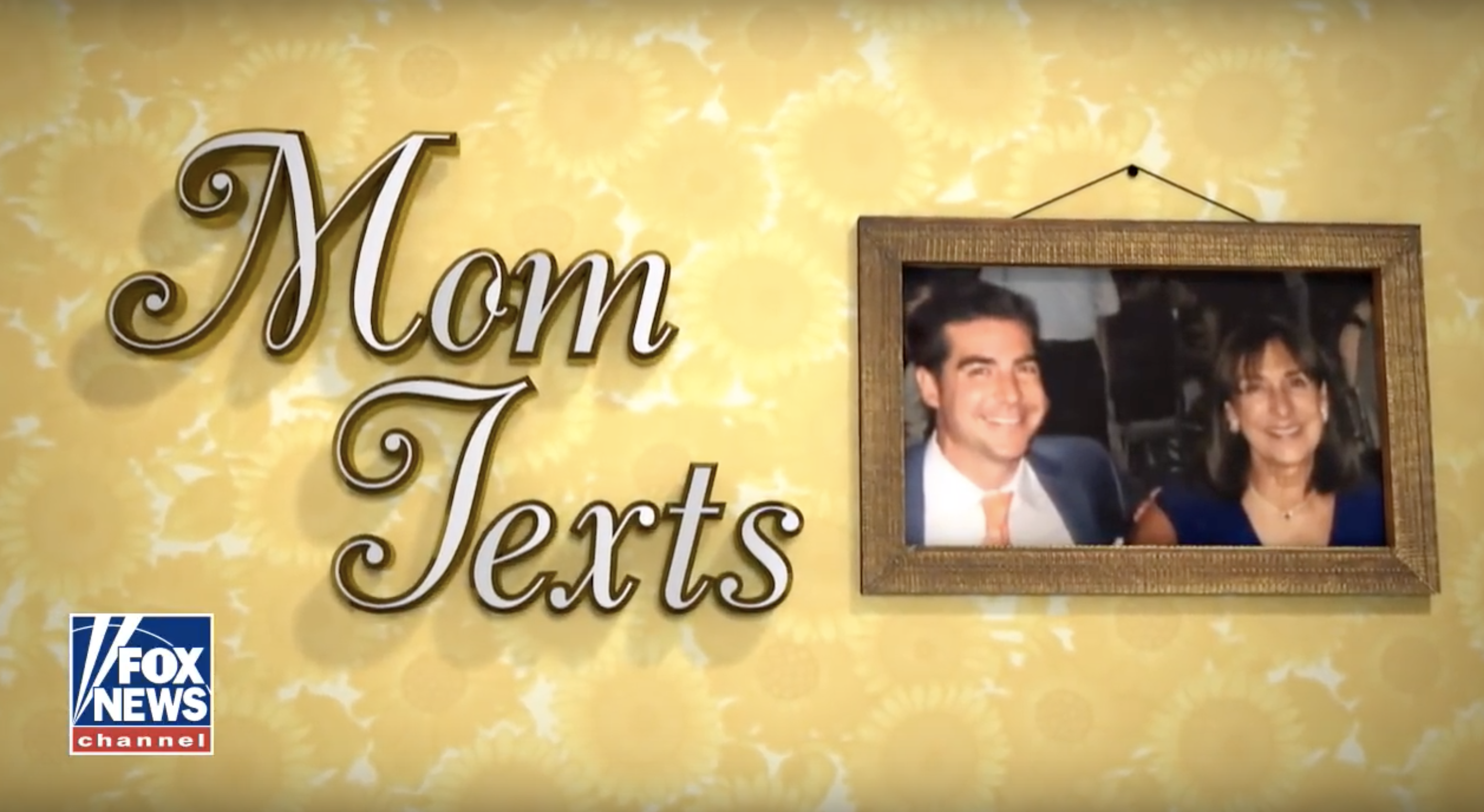 Jesse Watters has been reading his “Mom Texts” on Fox News since 2017. (Screenshot YouTube/ Fox News)

The Watters’s family differences may be more common than some think. Around 39% of Americans have some political diversity among family members, according to a 2018 survey by the Public Religion Research Institute and The Atlantic.

Anne Bailey Watters reminisced about the time period where the family realized her son had different political views, noting that it happened around college. Since then, her texts to her son vary, calling him out on anything from his outfits on “The Five,” his criticism of “The Squad,” his support for President Donald Trump and much more. (RELATED: Jesse Watters Says Democrats Want To Impeach Trump ‘For Exposing Biden’s Corruption’)

“Although family and school philosophical underpinnings taught him to respect and value difference, his interests growing up were more evidently centered upon friendships, athletics, and fun and it really wasn’t until college where we recognized a pronounced and seismically different political identity,” she wrote.

“We were told very clearly however, and with a commitment that was quite astonishing considering the breathtakingly blue-skied day, that he would not join us because he had to listen to Rush Limbaugh,” Anne Bailey Watters continued.

The family had some heated arguments stemming from their different political beliefs, but the conversations have become calmer over the years, the two said.

“I’ve learned that it’s not in either of our interest to have a cutthroat political debate at home during the weekends or during holidays,” Jesse Watters said, adding that he’s the only conservative in the family. “It just doesn’t get us anywhere.”

Jesse Watters and his mother, a child psychologist, now try to avoid heated political topics in person, but the Fox News host is still well-informed about his mother’s opinions because of the texts. He added that his mother’s messages have caused him to rethink how he approaches and talks about some of the news’ touchier topics.

“I know how she feels, because she’s constantly texting me,” Jesse Watters continued. “And then she knows how I feel, because I’m on TV every day for an hour. … I will definitely, after hearing from her, try to be respectful and try to take a more respectful tone sometimes on certain subjects that can be very touchy.”